Does the headline ring true? Is it BMW finding itself “stuck” in a debacle with a Chinese automaker? Or is Shuanghuan “stuck” in a fight with BMW, a fight it didn’t start?

The editors of daily newspapers who cover the auto industry weren’t in Shuanghuan’s offices during the display of design proposals for an upcoming SUV. The pundits from monthly car mags weren’t either. Even The Good Car Guy from GoodCarBadCar didn’t make an appearance in the boardroom. So we can’t really say for sure that: “BMW’s X5 has been obsequiously copied by Shuanghuan.” But…. really, I mean – that profile pic is a slavish rehash. I think. Maybe. 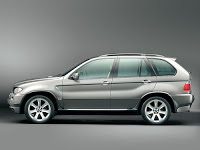 We the people of North America and Europe are prone to suggesting that BMW (and Honda, and General Motors) should not be so bothered. That makes sense – to us. We’re not confused as to the differing merits of the BMW X5, Mercedes ML350, Audi Q7, and Shuanghuan CEO. We understand and believe that BMW builds ultimate driving machines whereas Shuanghuan hasn’t hit the big time quite yet. Yup, that’s what we know.

We forget that China is different. Perhaps you were ignorant to this fact. Chinese consumers have only been purchasing/leasing luxury cars – any kind of car at all – for a few years. Yeah, deep down they know that BMW is a greater status symbol and that Audi would be a better alternative to the CEO. But the CEO doesn’t compete with the X5 or Q7. Shuanghuan’s SUV is likely no more than one third the cost of the BMW. What hurts and pains BMW about this is the detrimental effects the CEO will have upon its image. In North America, we wouldn’t downgrade BMW’s image without the combined effect of poor quality, ugly cars, and depressed performance .

In China, it’s possible that a potential X5 buyer would head to the Audi or Mercedes or Cadillac dealership when he realizes the look-like-previous-X5-Shuanghuan CEO’s trolling Shanghai’s streets make the real X5 look ‘cheap’.

But that name – CEO. Nifty.