Subaru is just one of a number of companies which treads a fine line between existing as a lovable sidebar or a successful mass-production carmaker. To make money, one must sell cars.

he simple reason of individualism? Subaru is a growing automaker, and its success in my neck of the woods is easy to see. They have infiltrated a market where people want practical vehicles – especially the kind that look tougher than they really are.

Saab attempts to walk this line as well, and does so less successfully. Jaguar hasn’t been much of a moneymaker in years. It is interesting, however, that we hear all about it now that they try and sell more vehicles by way of more product lines.
Bentley is in another stratosphere, but consider this: three extra models-within-a-model, all priced significantly lower than their previous mainstays. Financial success followed for Bentley.

Even Jeep is part of this debate. Sure, Jeep has held up a lofty image over the years. It is a company whose image is enhanced when we see 25-year old editions covered in mud. Nevertheless, Jeep wants to sell more vehicles and more of those vehicles are supposed to sell to young women. What have we? The Compass and Patriot. Neither have completely impressed the media and neither really shout JEEP.

So, back to the 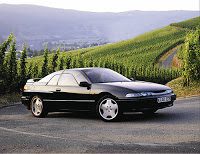 Subaru question. The recent debut of the 2008 Impreza makes you wonder how strong of a Subaru it really is. Factor in the common assumption that it will be a more appealing car to the masses. It doesn’t look as quirky, so perhaps the Scooby faithful won’t pine for it as they may have in 2002. It doesn’t look as quirky, so perhaps the Corolla-buyer (are there Corolla faithful?) will pine for it, as they did not in 2002. It will likely be a better drive, with improved handling and spunkier power delivery. But it’s not odd. My thinking is that Subaru has already come firmly in touch with the mainstream, having already developed their faithful following.

This car is not apt to force the inveterate away, because that buyer has long since become addicted to Subaru qualities. Qualities which, hopefully, will not disappear with the frog-eyed headlights.

Which I kinda liked.