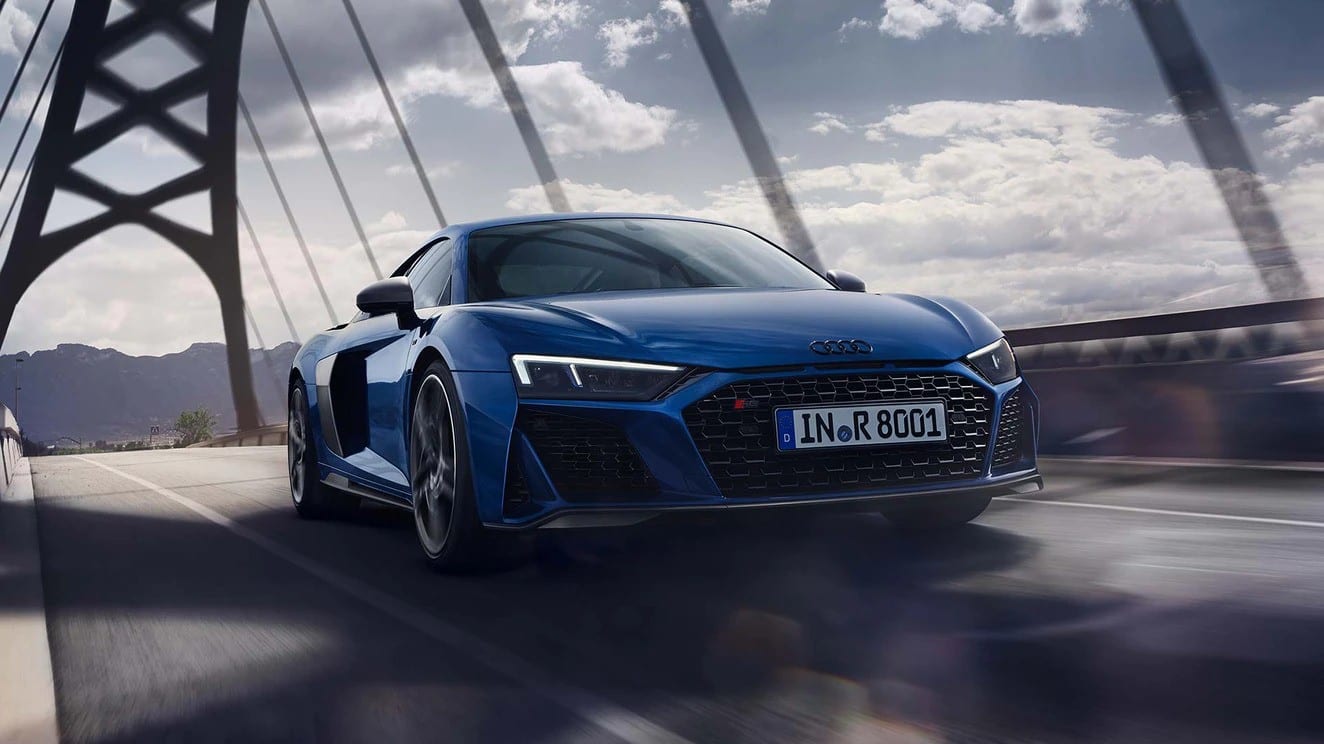 We tell you which cars offer more bliss and performance

Every year the GOODCARBADCAR team meets to analyze the main launches in the automotive market in different categories to bring you the best possible selection. Combining objective and subjective criteria we tell you which are the best options for you to put in your garage in 2021.

In this guide covering the 8 best sports cars for 2021, all aspects of each car are valued, including their sportiness and price ratio. The result is a mixture of sports cars from different segments, but all respond to a common premise: maximum bliss and performance for your money.

And it’s no surprise that in a guide like this one there are many high-priced sports cars with equally high performance, but it’s not only the price that counts, it’s also the delicate balance between driving joy, potential, and price.

The Porsche 911 Turbo 2021 is a more “domesticated” version of the 911 Turbo S but keeps that flavor that enthusiasts of the brand love so much. This new 911 Turbo has that same muscular styling we saw in the Turbo S version which was achieved thanks to the bodywork being widened by 45 and 20 millimeters at the rear and the front, respectively.

The 911 Turbo features wind tunnel-designed active aerodynamics that can be electronically controlled via the front cooling vents. But this is not the only active element in this car, you also have the front lip and the rear extendable spoiler that also grew notoriously.

In the interior, the driver and passenger will have in front of them a digital instrument panel, the 10.9-inch center screen, and a complete list of amenities that includes 14-way power seats, the Sport Chrono pack, a multi-function GT steering wheel with paddles, the control for the driving modes and a Bose sound system.

However, the best is under the rear hood of the 911 where you’ll find the twin-turbo 3.8-liter six-cylinder boxer engine now developing 572 horsepower and 553 lb-ft of torque. Less power compared to the 640 horsepower of the Turbo S but still a noticeable improvement compared to the Porsche 911 Turbo from 2020. It’s arguably one of the most formidable cars in the 2021 Porsche line-up.

The Audi R8 2021 is a car with high specifications, carrying a completely sporty, and above all, aerodynamic approach. If you think of a powerful model that offers a distinct and stylish design at a balanced cost, plus the level of technology and luxury you’d expect from a car in the 2021 Audi line-up, the R8 is a brilliant choice.

We’re in the second generation of this supercar, which has recently been updated with aesthetic, technological, and comfort improvements, to offer you the entire package in one of the fastest, most intoxicating sounding mid-engine cars out there.

Regarding the driving sensations, it’s definitely one of the most thrilling cars you can buy. The answer of the throttle is instantaneous and more than anything, the sound of this car is masterful, so prepare to capture the attention of many on the street.

The specs and heritage of the R8 allow you to take it to a track day or use it as a daily driver thanks to its technology which makes it the ideal car for cruising on the highway or having a relaxed drive in the city. Just watch out for bumps and potholes.

For years, Maserati had been flying under the radar constantly giving little to talk about except for the presentation of the Levante. But now with the MC20, Maserati wants to change all of that by returning the brand to its full glory: a company steeped in history, victories on the racetrack, and some iconic automobiles that dictated the aesthetics and luxury of their times.

The MC20 is a mid-engine two-seater sports car that marks Maserati’s return to the supercar segment, after a prolonged absence in which the Italian automaker focused on grand tourer models and luxury sedans.

The MC20’s design takes inspiration from the 2004 MC12 which was derived from the Ferrari Enzo. Now the MC20 will be responsible for Maserati’s return to endurance racing. And to achieve this, the Italian manufacturer has not hesitated to develop its own engine, the first in over two decades called Nettuno.

Accustomed to Maserati using Ferrari or Alfa Romeo engines, many of us saw the big similarities between the 3.0-liter V6 Nettuno and the V6 of the Alfa Romeo Giulia QV and Stelvio QV. However, the Nettuno is an engine created entirely by Maserati. The Nettuno pushes out 621 horsepower and 538 lb-ft of torque.

In conclusion, the new Maserati MC20 is a true Italian thoroughbred, tastefully designed, and conceived with a power-to-weight ratio that makes it perfect for racing but civil enough for the street.

After unveiling the Black Series, Mercedes-AMG turned its attention to the more ‘entry-level’ model of the GT line, which it has endowed with more power and improved equipment, on both the Coupe and Roadster versions. With this move, the German manufacturer seeks to attract more customers and offer a much more complete product without having to opt for the superior versions of this sports car.

The highlight of the Mercedes-AMG GT 2021 is that its eight-cylinder engine is now more powerful than ever thanks to a series of electronic adjustments that allow the 4.0-liter V8 to leave behind the 469 horsepower and 465 lb-ft of torque to now push out 523 horses and 494 lb-ft of torque. A notable increase in power hat causes the ‘S’ variant to leave the market permanently.

With these new figures, the AMG GT 2021 goes from 0 to 60 mph in 3.7 seconds. As for the maximum speed, the new configuration allows the car to reach 193 mph, five more compared to the previous year.

As if this was not enough, Mercedes-AMG now offers a new driving mode called Race which is accompanied by a series of variations with different performance elements such as adaptive dampers (Mercedes AMG Ride Control), an electronic limited-slip differential, and a larger high-performance brake system with aluminum calipers in red.

The Nissan GT-R with its many pseudonyms, such as Godzilla or the supercar killer, dominates the road with imposing personality, power, and the legendary essence that defines the GT-R, in a way that will take your senses to the limit.

The formula of the current Nissan GT-R was introduced back in 2008 and time has shown that all the work done by the Japanese engineers has been a real success as this sports car continues to wage war, with figures that keep surprising us. Now, a new update hit the market in 2021 and with it, a special edition has seen the light accompanied by a series of unique details.

Both the standard 2021 GT-R Nismo and the special edition will be available in the new Stealth Gray exterior shade, which is inspired by the asphalt of the tracks where previous GT-R models have raced and set records. Buyers of the Special Edition will also benefit from a clear-coated carbon fiber hood and exclusive 20-inch forged wheels with red accents made by RAYS.

From a mechanical standpoint, it doesn’t seem that Nissan made significant changes to this new GT-R. The Japanese sports car still has a 3.8-liter bi-turbo V6 engine that puts out an impressive 565 horsepower and 467 lb-ft of torque.

Legends must be honored. This is something that several American car companies understood perfectly as they know that nostalgia can be a huge sales tool.

Since its inception, the Mustang Mach 1 has sought to differentiate itself aesthetically from other Mustangs, and in this new interpretation, is no exception. The first thing you notice is the vinyl on the hood and sides, but looking more closely you’ll see the front splitter, a grill that emulates the original Mach 1, black 19-inch wheels specially designed by Mark Kaski, gray mirrors, a small spoiler, redesigned diffuser and the Mach 1 badges on the sides and trunk. It’s one of the most beautiful cars in the 2021 Ford line-up.

This new generation Mach 1 takes the best of the Mustang GT and inherits components from the Shelby GT350 and GT500. First, you’ll find the most powerful 5.0-liter V8 in a non-Shelby Mustang, with 480 horsepower and 420 lb-ft of torque. Purists will love the option of the Tremec 3160 six-speed manual gearbox but for those who prefer automatic, Ford also offers a high-performance 10-speed transmission.

The Mach 1 is considerably faster and handles better than the Mustang GT but it’s not quite as exotic a Shelby, plus the price difference with the GT leaves the question of whether it´s worth the hype more than other Mustangs. We think it’s totally worth it.

The latest Supra is the culmination of a legacy of over 40 years. This icon was created by TOYOTA GAZOO Racing with rear-wheel drive, an advanced and lightweight structure, and an interior focused on competition and comfort.

The fifth-generation Toyota Supra has been arguably the most controversial in history. This is because of several factors among which we can highlight that it’s a two-seater (and not a 2 + 2 like its ancestors) and that it shares many elements with the BMW Z4, including the engine whose power didn’t convince the most purists.

At the beginning of the year, further improvements were expected for the Supra. The increase in power was the most prominent to distinguish the car from its German cousin (the BMW Z4) and be more competitive against new rivals like the Nissan Z.

The new Supra got an additional 47 horsepower to its new turbocharged 3.0-liter inline-six-cylinder engine for a total of 382 ponies, along with the new torque that is now 369 lb-ft.

Driving fans will find the 2021 Subaru BRZ enticing thanks to its agile and fun handling provided by the manual transmission and the power of the engine going to the rear wheels, plus, other features that give the BRZ that old-school coupe feel. But what does BRZ stand for? The B is for Boxer, the arrangement of the cylinders, the R is for Rear, since it’s a rear-wheel-drive car and the Z is for the Zenit, a point in the celestial hemisphere higher than the horizon.

The steering and suspension of the BRZ which may be stiff for the average driver will be perfect for true car enthusiasts as they allow you to feel every detail on the road.

Another point in favor is the exterior design, which also follows the sporty guidelines with a low center of gravity, discreet lines that run through the coupe body, and features such as the 17-inch aluminum-alloy wheels, rear spoiler, glass with UV protection, LED headlights with ignition sensor and automatic leveling, fog lamps, and side mirrors with defroster.

The 2021 Subaru BRZ comes with a 2.0 4 cylinder boxer engine that puts out 205 horsepower at 7,000 rpm and 156 lb-ft of torque. It’s available with a six-speed manual gearbox and a less exciting CVT transmission.