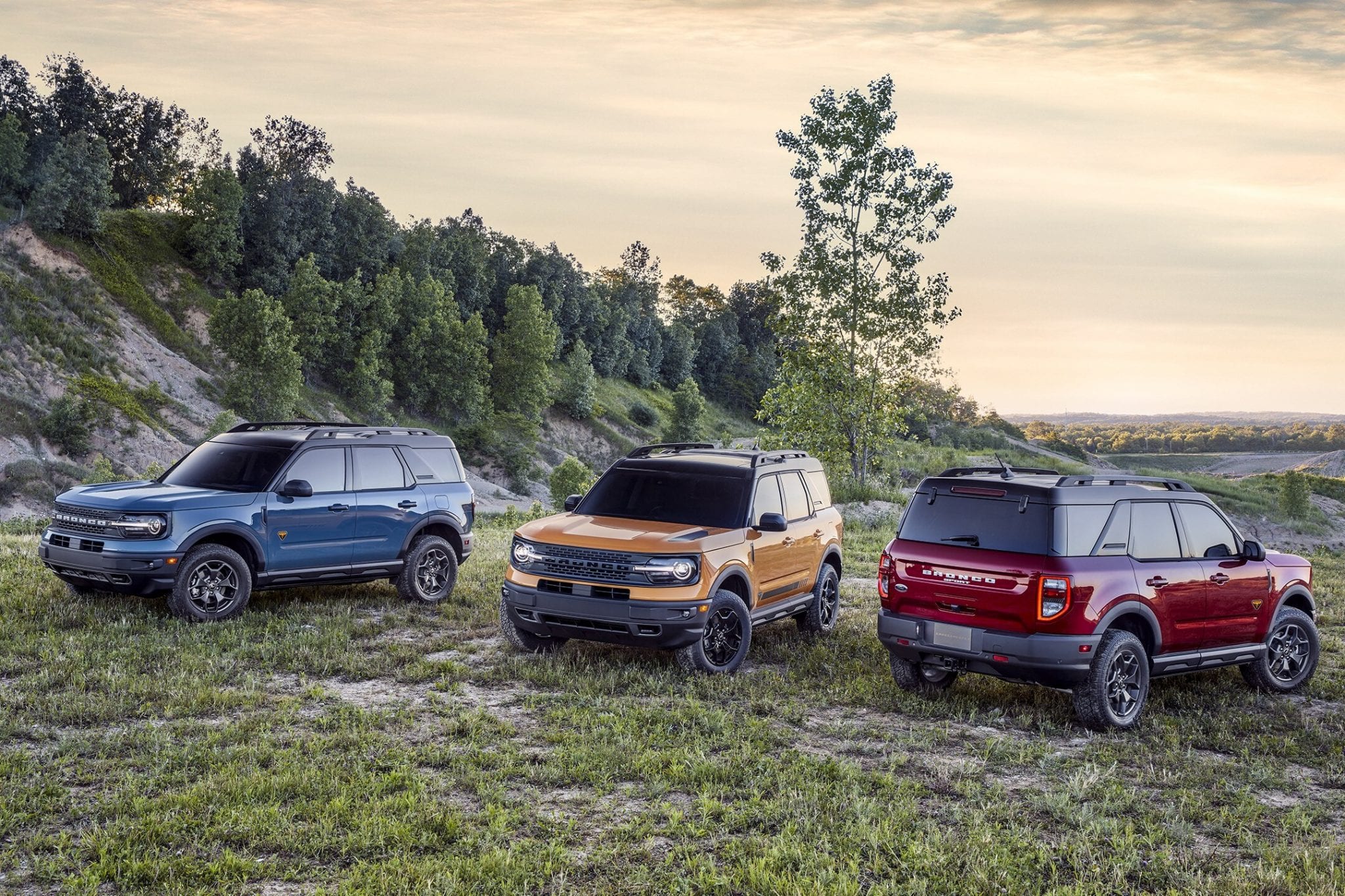 Best of the 2021 Ford Vehicle Lineup

Ford Continues its Tradition of Marrying Technology With Style

The Best Ford Vehicles for 2021

The Blue Oval enters the 2021 model year as an automaker that focuses almost exclusively on crossovers and trucks.

Ford has, in recent years, whittled its offerings down to its most popular models, which meant killing off cars like the Fiesta, Focus, and Fusion to make way for vehicles like the Mustang Mach-E and for the return of the Bronco.

While we may lament the loss of cars from yesterday, there’s no denying that the lack of sedans and coupes in Ford’s lineup is a direct result of a long-term trend in consumer preferences. 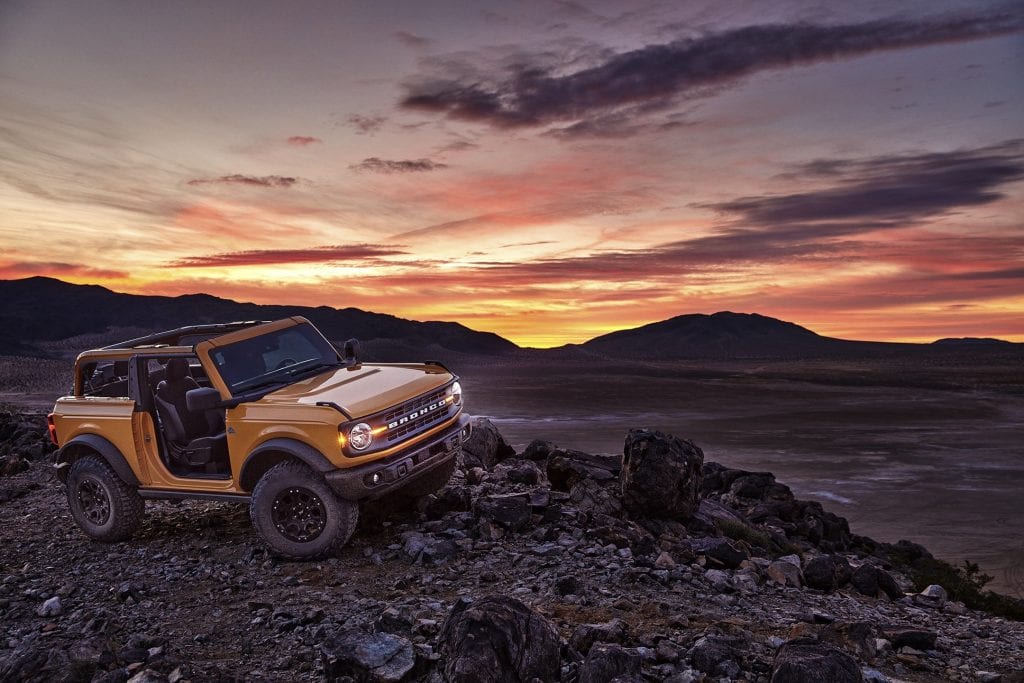 Ford revived the legendary Bronco for the 2021 model year, this time as both a two- or four-door SUV and as a smaller crossover, known as the Bronco Sport. The new vehicle can be outfitted with two different engines, two different transmissions, and can carry a host of off-road goodies.

The Bronco is offered with a turbocharged 2.3-liter four-cylinder engine that makes 270 hp and 310 lb-ft of torque as standard kit. A twin-turbo 2.7-liter V6 is available, which makes 310 hp and 400 lb-ft of torque. The standard transmission is a seven-speed manual, which includes a super low-range crawler gear for heavy off-roading. A ten-speed automatic can be optioned in. 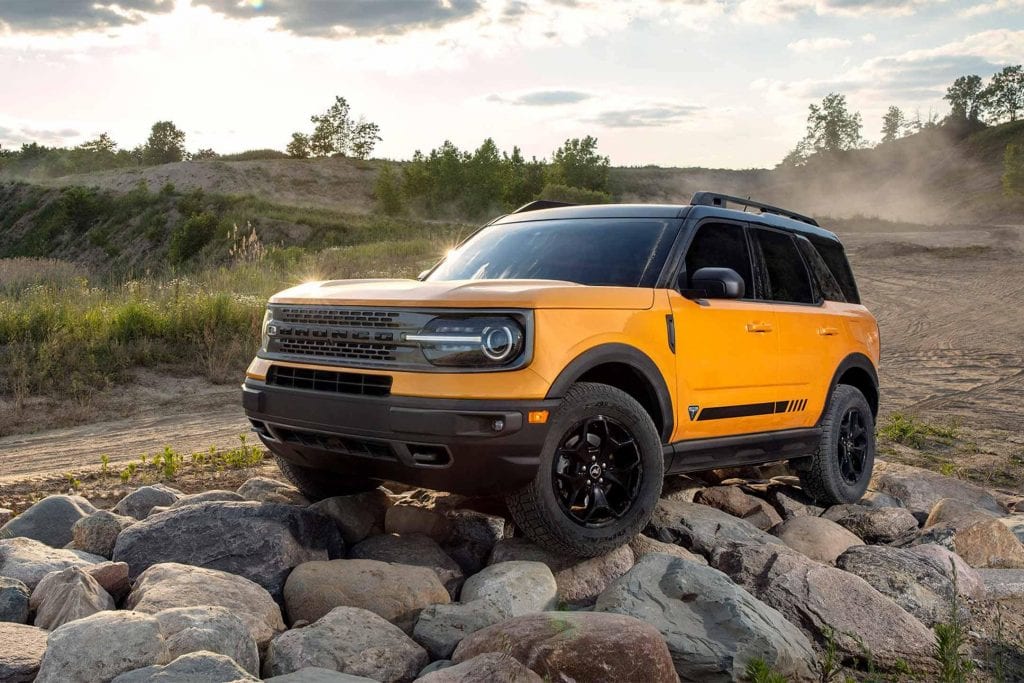 When Ford announced that it was bringing the Bronco back for the 2021 model year, it also announced the Bronco Sport, which is a smaller, friendlier vehicle. Even so, it’s got legitimate off-road capability that make it stand out from the crowds of mall-crawling crossovers on the market today.

The Bronco Sport line is powered by two engines for the 2021 model year. The base mill is a turbocharged 1.5-liter three-cylinder engine with auto start-stop technology. It produces 181 horsepower. The optional engine is a turbocharged 2.0-liter four-cylinder with auto start-stop tech. It makes 245 horsepower. Both engine are paired with an eight-speed automatic gearbox, though the optional mill comes with an oil cooler and a manual shift mode for the transmission.

The Ford GT has grown into its own animal, after having been revived in the early 2000s as a tribute to the Le Mans-winning cars from the 1960s. The 2021 car gets new special editions and updates to its powertrain that make it even faster than before.

The GT is powered by a 3.5-liter EcoBoost engine. It’s a twin-turbocharged six-cylinder unit that produces a massive 660 horsepower. Power hits the rear wheels through a seven-speed dual-clutch transmission. 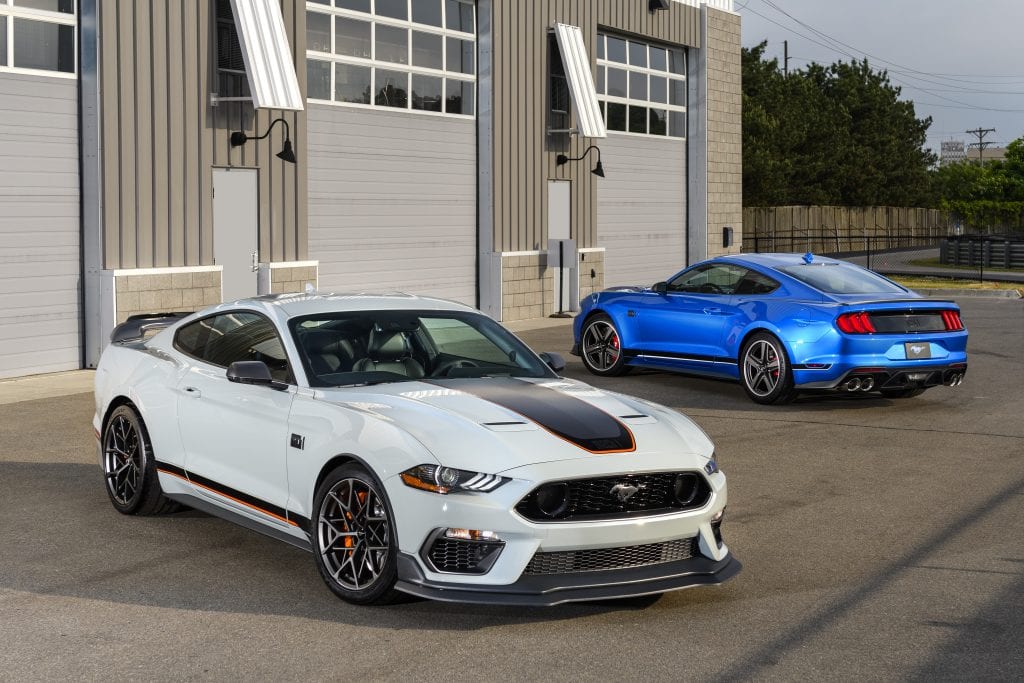 The Ford Mustang is one of the most iconic vehicles of any type. After decades and decades on the market, the car has emerged as a clear winner of the muscle race between Ford, Chevrolet, and Dodge, though Dodge’s Hellcat vehicles are wildly popular in their own right. 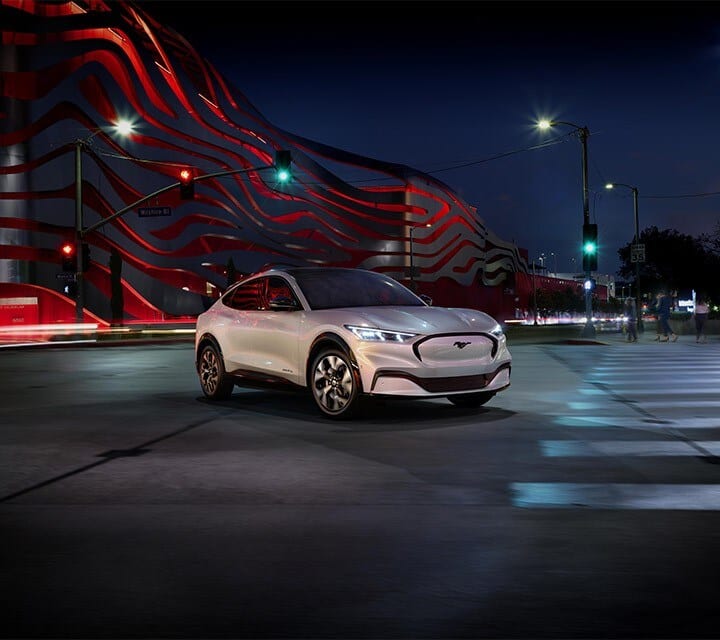 Purists are up in arms, but everyone else is excited. The Mustang Mach-E is the first all-electric vehicle from Ford, and it’s got performance, looks, and tech to pull in the buyers. The Mach-E is offered in several configurations, all of which come only with electric power.

A series of drivetrain options are available for the Mach-E, depending on the trim and configuration ordered. The vehicle can be purchased in either standard or extended range, and with either rear- or all-wheel drive. Standard range models can travel between 210 and 230 miles on a single charge, while extended range models can travel up to 300 miles in between charging sessions. 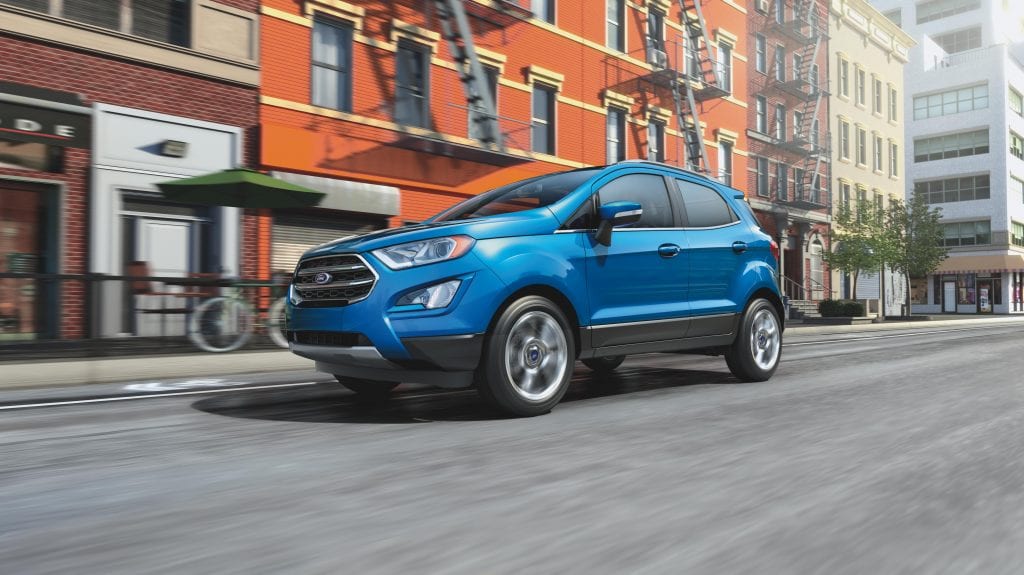 The Ford Ecosport was already an aging fixture on the European auto market when it landed in the U.S. in 2018. Since then Ford has given the Ecosport minor updates, and that trend has continued into 2021.

The Ford Edge is likely nearing the end of its lifespan in the Blue Oval vehicle lineup, but it’s still a solid two-row crossover for buyers that don’t need the extra room. The spicy Edge ST features a rowdy V6, and most models can be equipped with the latest in driver assistance features. 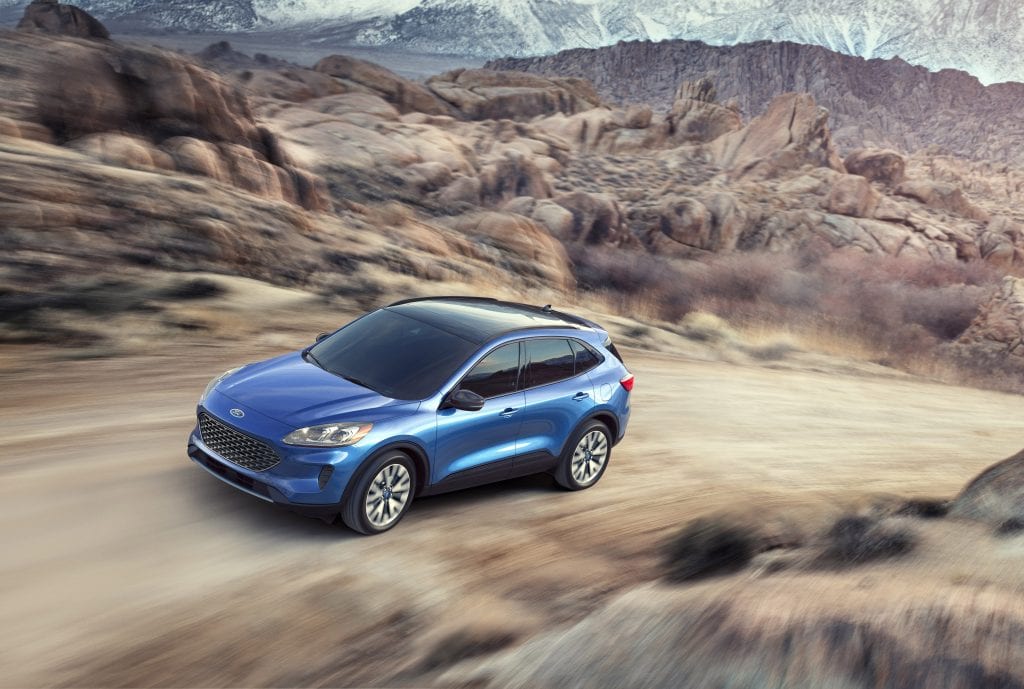 The Escape got a thorough redesign for the 2020 model year, which brought a completely new look, a load of new tech, and an overhauled interior that has more room than before. Changes for 2021 are subtle by comparison, and amount to a few new colors, new wheel designs, and new infotainment software.

The Edge Plug-in Hybrid will be delayed slightly to accommodate for battery fixes after European models were plagued by fires. We expect the remainder of 2020’s powertrains to continue on into 2021. They include a 180-hp 1.5-liter inline-three, a 250-hp turbocharged 2.0-liter inline-four, and a 2.5-liter line-four hybrid that makes 198 system horsepower. 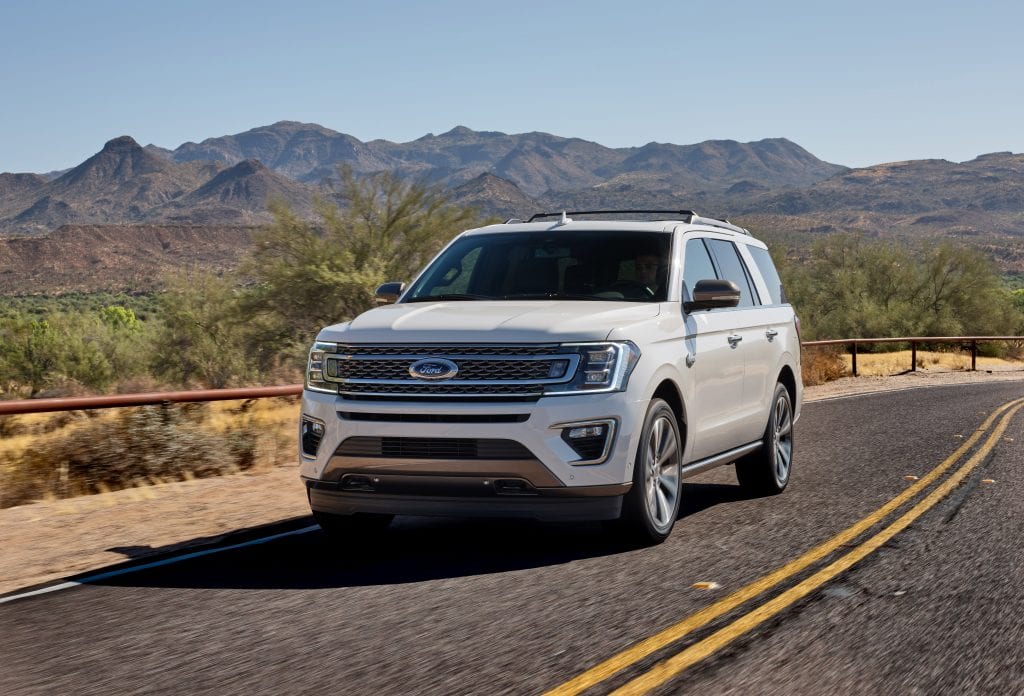 The Ford Expedition is the largest SUV from The Blue Oval and remains the solid, capable family hauler it’s always been. Changes for the 2020 model year are light, amounting to a few new features and wheel designs.

A twin-turbo 3.5-liter V6 provides power for the Expedition line, sending 375 horsepower to the rear or all four wheels through a ten-speed automatic transmission. The range-topping Platinum trim level gets a power bump to 400hp. 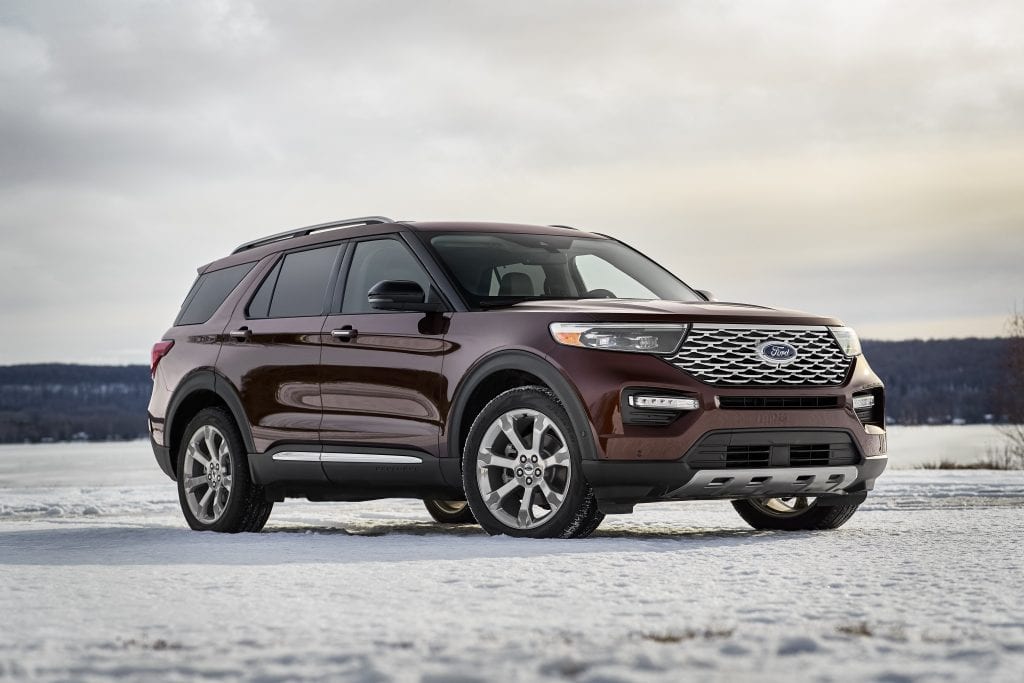 The SUV that really started the craze back in the 1990s got a major overhaul for the 2020 model year. Because of that, changes for 2021 are modest.

Three engines are on deck for the 2021 Explorer. The base mill is a 2.3-liter EcoBoost inline-four that makes 300 horsepower and 310 lb-ft of torque. There’s a hybrid, which uses a 3.3-liter V6 and electric motors to produce 318 combined system horsepower. The top two trims, ST and Platinum, both get a 3.0-liter EcoBoost V6. In the ST trim, the engine makes 400 horsepower and in the Platinum model it produces 365 horsepower. A ten-speed automatic transmission and rear-wheel drive is standard, and four-wheel drive can be optioned in. 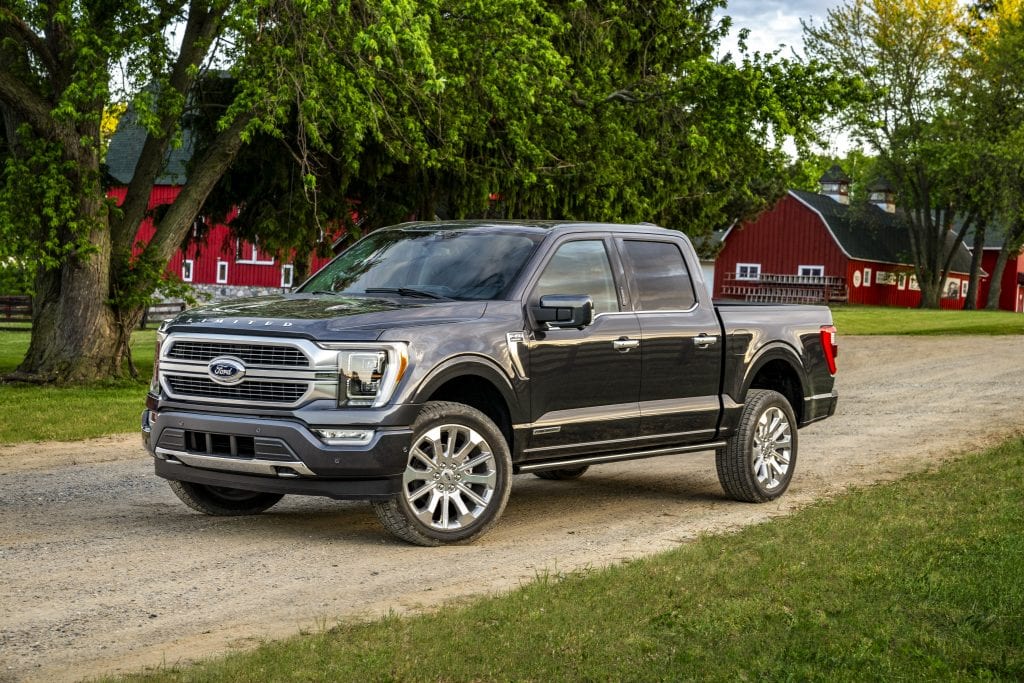 As one of the best-selling vehicles in the world, the Ford F-150 is an important model, both for the automaker and for the country. The 2021 truck has been completely refreshed, and will get a new hybrid model that offers incredible towing capabilities and great fuel economy. 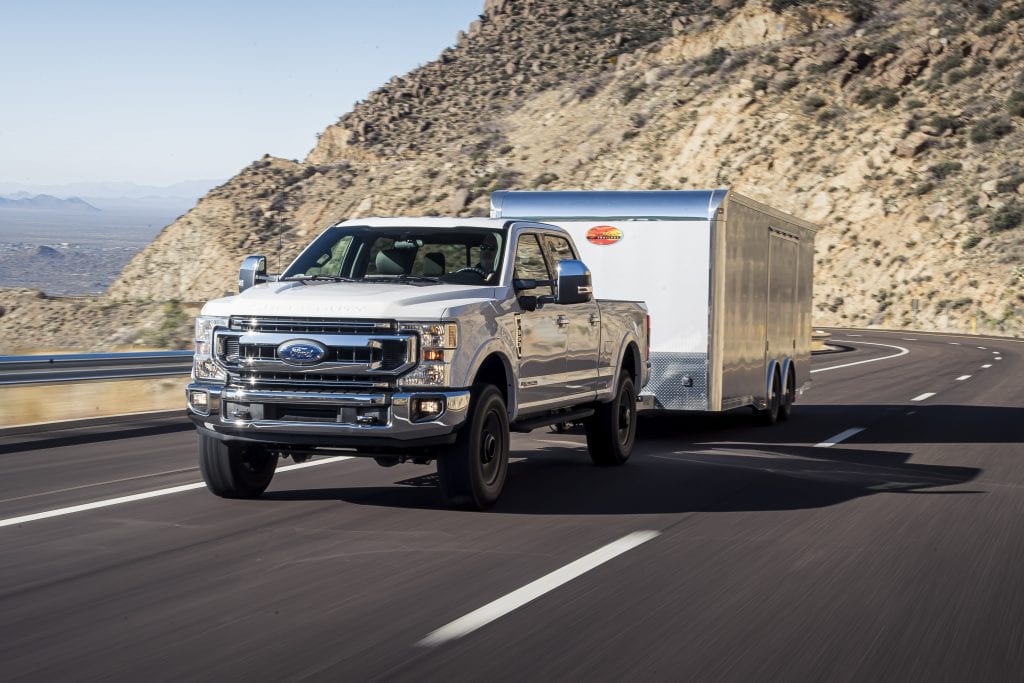 Changes to the 2021 Super Duty are minimal, but it will remain at the top of the heap of heavy duty pickups. It’s got a wide variety of engine choices, and can be outfitted as everything from a stripped-down work truck to a massive luxury barge. 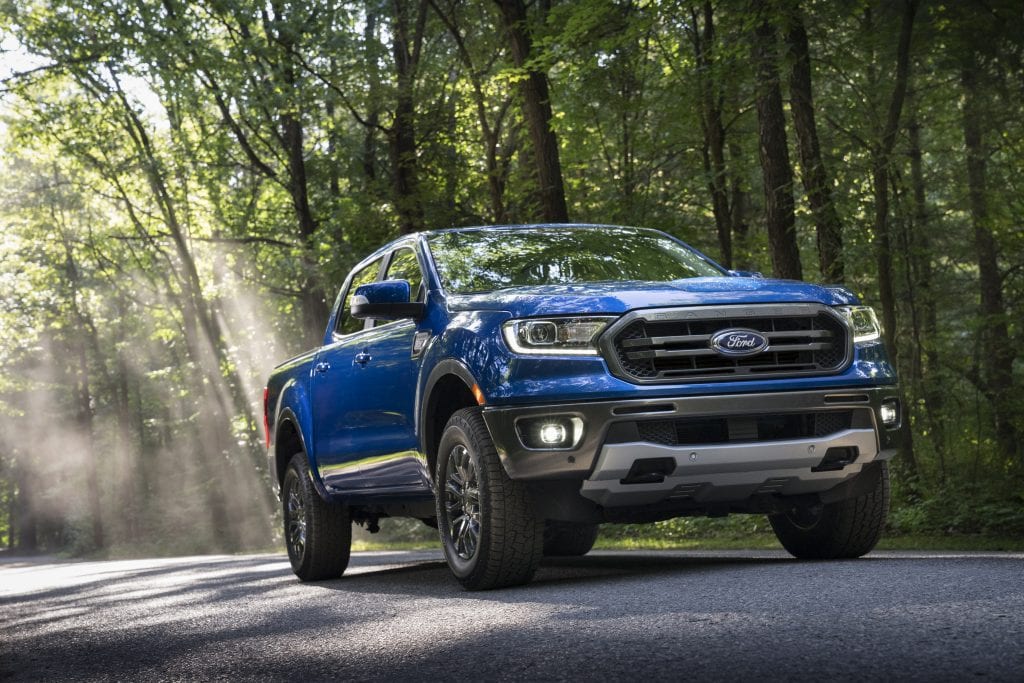 Though it’s a relatively new (re)addition to the Ford lineup, the Ranger has been on the international market for years. It’s starting to show its age against domestic competition from Chevrolet, GMC, and Toyota, and the new Nissan Frontier should be right around the corner.

The 2021 Ranger is powered by a single four-cylinder engine. It’s a 2.3-liter EcoBoost inline-four with auto start-stop tech. It produces 270 horsepower and 310 lb-ft of torque.