This morning, GoodCarBadCar introduced you to the world of automotive facts. Contrasts, comparisons, enlightenments, and pointless exercises to challenge the automotive quadrant of your brain. Now comes a more specific challenge. If you want to impress your friends with auto acumen, you can’t simply stick to the Toyota, BMW, and Honda material. Go, look for America. Chevrolet is America; at least their advertising tempts you to believe it to be true. So, listen up – during the next conversation you have with your Impala-driving neighbour, you’ll one-up him with Chevy truth.

#10 – Chevrolet’s fastest car is the Corvette Z06. We’re talking 505 horsepower here and a top speed nudging 200mph. Rumour has it that an even more powerful ‘Vette will debut; perhaps named SS or ZR-1 or Z07. Think 600 horsepower. 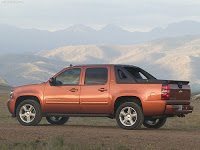 GMC, where the Silverado and Colorado can be seen as Sierra’s and Canyon’s. The Avalanche is heavily tarted up when it becomes a Cadillac Escalade EXT, though.

#7 – The Camaro lost so much sway with buyers that many people failed to notice that the last Chevrolet ponycar left the factory in 2002. Camaro’s will trot with more swagger when they’re reintroduced before the end of the decade.

#6 – While Buick has the Enclave, Saturn the Outlook, and GMC the Acadia, Chevrolet does not as of yet display a version of GM’s Lambda architecture. A crossover/wagon/SUV to replace or supplement the TrailBlazer will come, however, and it will likely be a Lambda vehicle.

#5 – The 2008 Malibu belongs in this millenium. The outgoing Malibu made a great alternative to older used cars.

#4 – Build a Suburban on Chevrolet’s Canadian website. Load to the gunnels. Look at the pricetag. $74,355. In case you hadn’t heard, the Canadian dollar reached parity 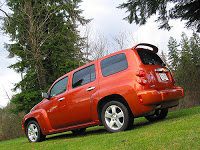 with the US dollar in the last couple of days. I attempted to do the same thing on Chevrolet’s American website and my pricetag was $18,590 less.

#3 – Chevrolet’s retro HHR was designed by the same man who penned its most famous competitor, Chrysler’s PT Cruiser. His name is Bryan Nesbitt, and he now heads up design for General Motors in Europe. Opel’s and Vauxhall’s are surely not retro these days.

#2 – GMcanada.com really, actually, truly uses these words in describing the Corvette’s automatic transmission: “Select ‘S’ mode and the steering wheel-mounted, F1-style paddle shifters are activated, allowing you to choose the right gear for every situation.” It is a great transmission. I was just surprised that Chevrolet would bother with a link to Formula 1.

#1 – Of the six vehicles showcased on chevrolet.co.uk, the Captiva is certainly the most attractive. Few, if any, would look familiar to American consumers.