Parked downstairs under a maple tree sits an Audi Q7. The first SUV/CUV/SAV from Volkswagen’s German luxury subsidiary is a dramatic looker. As a woman, the Q7 is the kind that definitely grabs your attention, perhaps even keeps it, but makes you wonder why. As a toddler, the Q7 is the the large variety that’s not mussed up in any way, but is in no manner “cute”.

And as painted in “Condor Gray”, known in Canada as “Condor Gray Metallic” and in the UK as “Condor Gray, metallic” like the one in the parking lot beneath me, the Q7 manages to lose a large part of its vast appeal. An educated guess would lead you to believe that less than half of the planet’s vehicles are hyper colour sensitive. In some of those cases, the colour is enough to transform the vehicle from desirable to undesirable. 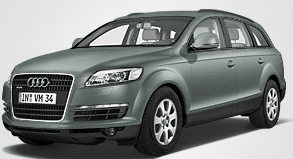 Let’s put it this way: if you’re in the market for a Q7, please don’t choose Condor Gray. The screenshots from Audi’s websites cast this hue in an almost-decent light. In real, live, natural sunlight (or complete overcast as is the case here today), a Condor Gray Metallic Audi Q7 is sickening.