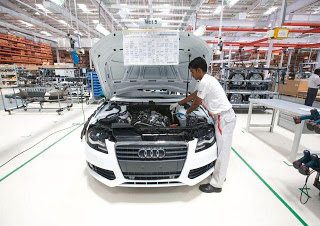 AUDI A4 DOMINATES IN GERMANY – BY THE NUMBERS

Don’t consider the Numbers you’ll read below to be a death knell for BMW. Nah, BMW and Mercedes-Benz are doing just fine. However, Audi is doing very, very fine. Take this as evidence: whilst Buick’s resurgence is mainly fuelled by its Chinese success far from its home market of the USA, Audi’s ploy to become the largest luxury automaker in the world sometime next decade starts in the heart of luxury automotive manufacturing. Deutschland.

2 – rank of the Audi A4 in terms of the best-selling cars in Germany, falling behind only the Golf, a car manufactured by Audi’s headmaster, Volkswagen
8.1 – percentage of the German auto market now held by Audi, up 0.8%; twice the gain Audi posted in all of western Europe where its market share now stands at 4.8%
45,304 – total Audi A6 sales in Germany during the twelve months of 2008, which, like the A4’s case, leads its respective segment
5 – rank of Audi in terms of best-selling automakers in Germany in 2008, behind Volkswagen, Mercedes-Benz, BMW, and Opel
10,630 – total sales of the Audi TT in Germany circa 2008, making the two-time Good 12 winner the most successful sports car in Audi’s home country
1,003,000 – total worldwide Audi sales in 2008
13 – consecutive years in which Audi has posted improved worldwide sales
5 – countries in which Audi manufactures automobiles, not including Italy, where Audi subsidiary Lamborghini produces all its cars
100 – years of Audi production as of July, 2009
More Audi posts from GoodCarBadCar.net
The Good 12 Supersize – Audi Q5
The Good 12 v2.0 – Audi TT
The Good 12 v2.0 – Audi A4 Avant
Honest Audi Le Mans Video
A6 No-Clean Alcoa Wheels