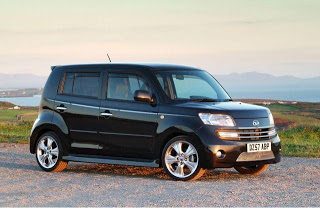 ACROSS THE POND – Daihatsu Materia

Yes, that face does look familiar. You know a miniaturized bread van/hearse/armoured car combo when you see it. But the badge is all wrong.

This is the Scion xB, but the ad slogan is different. “You’d be crazy not to!” says Daihatsu UK. Yes; with an exclamation point.

Toyota owns Scion. Toyota took a controlling stake in Daihatsu (51.2%) in 1999. So here you have the Daihatsu Materia. Where’s the L? You’re guess is as good as mine. Daihatsu’s are not luxurious Lexus sedans. Perhaps they felt Material would be deceving, seeing as how so little material is needed to build most Daihatsu’s.

The Materia, a word which makes me smirk every time I type it, starts at £10,995 in the UK. For that price you get a 1.5L, 102bhp four-cylinder and a manual trans. The Materia Auto, as you would assume, adds an automatic transmission. Nice, thanks.

Daihatsu.co.uk’s best line is as follows: “A 1.5 litre engine guarantees lively performance with economy giving 39.2 mpg (manual transmission) on the Combined Cycle with a 0 – 62 mph acceleration time of 10.8 seconds.” Guarantees? Guarantees? Did they put the guarantees with the wrong subject, having intended to place it after the ‘with’ and a ‘d’ in place of the ‘s’ on the end? I think so.

The accessory list is Scionesque in its length. Vehicular brethren are more plentiful for the Daihatsu, however. The Sirion, Terios, and Copen are itsy-bitsy in their own ways.

So, Across The Pond we went. And what did we find? An xB branded with a badge which stands for a company name most Americans can’t pronounce.