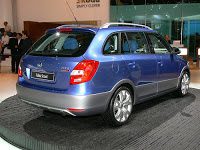 Frankfurt’s Auto Show heralded a return to small-car expansion in autodom over the last week or more. GoodCarBadCar covered the introductions of the Ford Verve, Mitsubishi Concept cX, Volkswagen up!, Toyota iQ, and Subaru Justy.

In case you were craving some more small, here’s a few more samples. A few weeks ago GCBC went Across the Pond to overview Skoda. If you hadn’t met the Fabia before then, you made acquaintance with an orange version after reading about 70% of the article. Skoda manages to impress a fair number of buyers these days, but the Czech automaker (a VW subsidiary) knows just as well as Mercedes, BMW, and Audi that marketing to the little crosssections; the niches, is an easy way to make a bit of extra $.

The Fabia then, stretched in its wagon format to be called the Combi, was introduced as the Skoda Fabia Combi Scout. Skoda’s has already slathered the Roomster and Octavia with Scoutness, so why not the Fabia? (I can think of a few reasons, none of which Skoda execs want to he 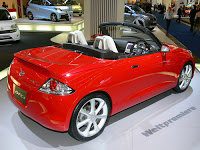 ar.) Lower-body cladding is a great way for buyers to feel remorse two years on when they realize they paid extra for a trimline that was genuinely just that…. a few lines of trim. Admittedly, the Fabia Combi Scout does have a smidgen of cool.

Daihatsu is a citizen of Toyota’s empire, as you can see in the story about the Subaru Justy, oddly enough. The Copen was introduced a number of years ago as a very cheap and economical alternative to the Audi TT, but as an alumimum hard-top convertible. I don’t actually know anybody who would consider an Audi TT and switch to the Daihatsu Copen…. but, the Copen was surely TT-inspired. At present, the UK edition of the Copen features an 86-bhp, 1.3L four-cylinder. That enables the Copen to proceed to 60mph in less than ten seconds and achieve 47.1mpg on the combined cycle in Europe.

Frankfurt didn’t see the debut of a new Copen. Or did it? Daihatsu’s OFC-1 is surely Copen-like, with a small turbocharged engine and a top that drops in 10 seconds. Copen-like it is, but perhaps better-than-Copen styling and a more-modern-than-Copen structure. Daihatsu’s other small car concept was the striking Heart and Smile Mover. Uh-huh. Heart and Smile Mover. Oh so Japanese, the HSC has a 660cc engine which provides very little in terms of horsepower but plenty of ssssmiles per gallon. We’re not quite sure why Daihatsu thinks that HSC is a proper abbreviation for Heart and Smile Mover, but I am sure that these cars qualify for tax breaks, cheaper insurance, and parking proof exemptions because of their kei car status. Small engine + small car = yellow-plate status.