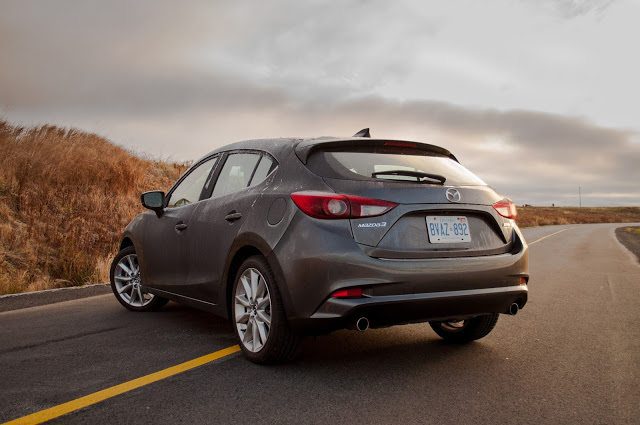 Mazda has been selling the current version of the Mazda 3 since the end of 2013. It was critically acclaimed from the get-go, and while it’s faults are becoming more noticeable as new competitors reach the market with greater refinment, the Mazda 3 continues to stand head and shoulders above most competitors because of its on-road mannerisms.

For 2017, Mazda tinkered with the 3’s styling, but not so much that you’ll notice. Mazda also added a software function to the front end called G-Vectoring Control. You likely won’t notice that, either. Indeed, so subtle are G-Vectoring Control’s functions that you may not notice the difference during back-to-back drives with the 2016 and 2017 models.

Yet G-Vectoring Control, which reduces steering effort with modest torque reductions to a given wheel mid-corner, makes the 2017 Mazda 3 even better to drive, as if that was necessary.

The problem? The Mazda 3 didn’t need to be better to drive.

It would be nice if the Mazda 3 was better to live with.

Road noise is excessive, slush strikes the undercarriage like thunder, the driver’s armrest is too uselessly positioned to be useful, rear ingress is awkward, the plasticky head-up display is an afterthought, the cabin took forever to warm up on 0°C mornings, the 2.5L doesn’t feel much quicker than the 2.0L, fuel economy is unimpressive, and the price tag is lofty.

It’s not perfect, no. But it’s still the pick of the current compact car class.

Neither engine is turbocharged. Both are available with 6-speed manual and automatic transmissions. 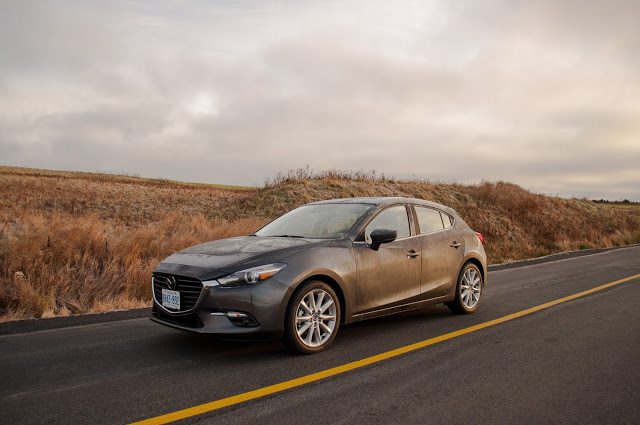 The test car Mazda Canada sent our way is a slightly updated 2017 Mazda 3 hatchback, known as the 5-Door in the United States and the Sport here in Canada. Available as a GX or GS with the 2.0L, this specific car is a GT that comes standard with the 2.5L engine. Added to this $26,795 Sport GT are $300 Machine Grey paint and a $2900 Premium Package (leather, power driver’s seat, Bose audo, navigation, proximity access, and a safety suite: adaptive cruise, lane keep assist, lane departure warning, auto high beams, etc.)

The grand total with the manual transmission is $29,995.

An automatic transmission is a no-cost option on the GT, but the automatic adds to the option sheet a $1350 Technology Package with Mazda’s i-ELOOP regenerative braking, active grille shutters, and adaptive lighting, dragging the fully optioned price up to $31,345.

HOW BIG IS IT?
In order to get a sense of the Mazda 3’s dimensions, compare it with three cars: its predecessor, its direct rival, and its obvious in-showroom alternative.

The second-generation Mazda 3 hatchback was nearly two inches longer than the current car, more than an inch narrower, and half an inch taller. The 2017 Mazda 3 offers 2% more passenger volume and 19% more cargo volume than the old car, according to official specs.

The new-for-2017 Honda Civic Hatchback, a 5-door variant of Canada’s most popular car, is slightly more than two inches longer than the 2017 Mazda 3 Sport, almost identically broad, and nearly an inch lower. In upper-trim levels, the Civic has 2% less passenger volume (but feels like the more spacious car) and 27% more cargo capacity.

Many buyers are now veering toward vehicles like Mazda’s own CX-5, which has recently been selling just as often as the Mazda 3 in Canada. The top-trim CX-5 is three inches longer than the Mazda 3, nearly two inches wider, but 8.4 inches taller. These dimensional differences carve out 6% more space for passengers and 69% more cargo volume.

DOES IT WORK?
In almost every way, yes, it does.

The 2017 Mazda 3 Sport GT isn’t just an attractive hatch with surprisingly sporty handling and the bigger of two available engines.

Yet Mazda completed the complicated (and often uncompleted) task of marrying that ride quality to exceptional handling. Not only does the Mazda 3 Sport quickly bite into a corner and hang on with its all its might, it provides feedback through the wheel and chassis all the way through the corner.

Feedback, communication, engagement. That’s the kind of stuff that enables you to push the Mazda a little harder, to discover its limits with help from the Mazda itself, not just on the basis of your own nerve.

In our test car, that sense of man-machine connection is furthered by a manual transmission that illustrates all the best attributes of manual transmissions. A light clutch with a clear point of engagement, a vibration-free shifter with short throws and mechanical sensations – this is why drivers enjoy rowing their own.

Manual transmissions are not automatically (pardon me) terrific, as we testified earlier this year. But Mazda excels in this area, and you must weigh the appeal of this transmission if you’re considering a new Mazda 3.

Intuitive controls are the norm throughout the 3, in fact. Mazda’s infotainment unit is thankfully controlled by a central control knob between the front seats, aided by volume control and quick access buttons there, too. The screen isn’t the fastest or the most technologically advanced, but simple functions are blissfully simple, and climate changes are controlled independently. 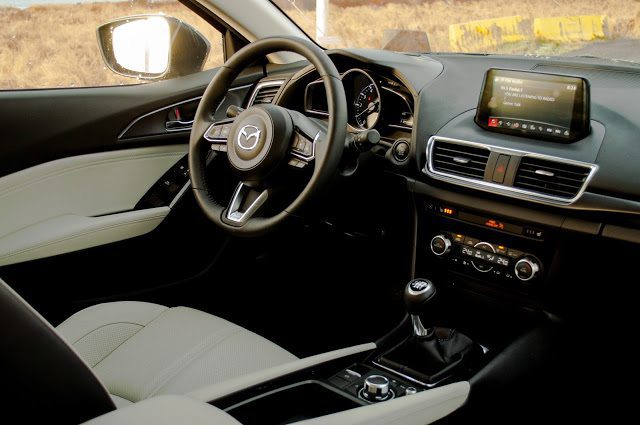 IS ANYONE BUYING IT?
Canadian sales of the Mazda 3 are surely not what they once were. Mazda Canada sold more than 50,000 3s as recently as 2008 but won’t sell 30,000 in 2016. Through 11 months, sales of the 3 family are down 21% compared with 2015. It’s fair to say many of those buyers are now owners of a CX-5 or CX-3, but the overarching Mazda brand has steadily been losing market share in Canada as its most popular model declines.

SHOULD I BUY SOMETHING ELSE INSTEAD?
We say no.

But opinions are allowed to differ, and you owe it to yourself to drive a 2017 Volkswagen Golf with the excellent 1.8L turbocharged engine. There’s also a new Subaru Impreza 5-Door arriving at dealers. Canadians are bound to consider the new hatchback version of the Honda Civic, perennially Canada’s best-selling car for more than a handful of reasons.

‘;
document.getElementById(“vinads_div”).innerHTML = lfAd;
}
});
HOW MUCH SHOULD I PAY?
Well, this certainly seems like a lot of money for a compact Mazda, doesn’t it?

You want the bigger 2.5L engine, not only for the extra power but for the equipment associated with the upper-trim levels that include the 2.5L. That seems fair. But we recommend consideration of the 2.0L-powered, $23,095 Mazda 3 Sport GS. Don’t pony up $1300 for the automatic, but throw in $989 for a set of Mazda’s 17-inch Hyper Silver alloys so your 3 doesn’t look so dreadfully poverty-spec.

WHAT’S THE VERDICT?
There’s no better all-around package in the class than the Mazda 3 Sport, already a class leader before it was improved for 2017.

It is not faultless, but it excels in so many different areas. Competitors, such as the Volkswagen Golf, may drive sweetly, but then there are price and infotainment concerns. Others feel better built, such as the Honda Civic Hatchback, but it’s fa less fun to drive and something of an ugly duckling. Others, such as the Kia Forte5, are more attractive, yet the long-term resale value concern is a real one.

The 2017 Mazda 3 Sport GT is sufficiently spacious, attractive, quick, and efficient; decently equipped and priced; intuitively laid out; and utterly terrific to drive.

Subtract its class-leading dynamic repertoire and it’d still be an impressive car. But throw in the kind of dynamic behaviour that links it closely to the Mazda MX-5 Miata and all doubt is removed.

Timothy Cain is the founder of GoodCarBadCar.net, which obsesses over the free and frequent publication of U.S. and Canadian auto sales figures. Follow on Twitter @goodcarbadcar and on Facebook. The 3 was supplied by Mazda Canada’s press office.