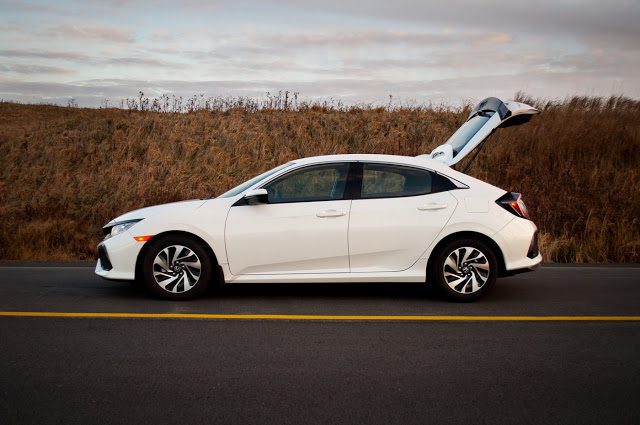 For the first time in nearly four decades, Honda Canada is selling a five-door Honda Civic hatchback. Not since the last millennium has Honda Canada offered a Civic with a tailgate. That car, often seen lowered, with a coffee can exhaust pipe, and Mugen stickers, is not this car.

For the 2017 model year, Honda has added a third bodystyle to the tenth-generation Civic lineup. After the sedan and coupe, both Canadian-built, this hatchback makes its way over from Honda’s Swindon, England, assembly plant with the 1.5L turbocharged four-cylinder upgrade as standard equipment and more backside birthmarks than a mother could tolerate.

Forget the sedan. That’s the Civic everyone else buys. In Canada, with the Civic lineup accounting for 10% of all passenger car sales, do you really need to drive the Civic that everyone else already drives?

The Civic coupe, meanwhile, is undeniably the most stylish member of the trio. But while the rear seat is decent, it’s not sufficiently practical for your lifestyle.

You want that turbocharged powerplant. You don’t mind driving the antithesis of vehicular beauty. You need flexibility. Finally, the most popular car in Canada is available in the bodystyle you require.

WHAT IS IT?
Canadian pricing for the new Civic Hatchback starts at $23,085. That’s $5000 beyond the base price of the Civic sedan, but don’t be fooled. Those two price points aren’t comparable. There’s no DX trim in the hatch, for one thing, and the hatch comes standard with the 1.5L turbocharged engine that’s not even available on the sedan until you reach the EX-T at $26,885. Plus, Honda Canada has not yet made the sedan available with the 1.5T and a manual shifter. Like for like, a Civic LX sedan with the continuously variable automatic transmission is $22,285, making the turbo hatchback a $2100 proposition. 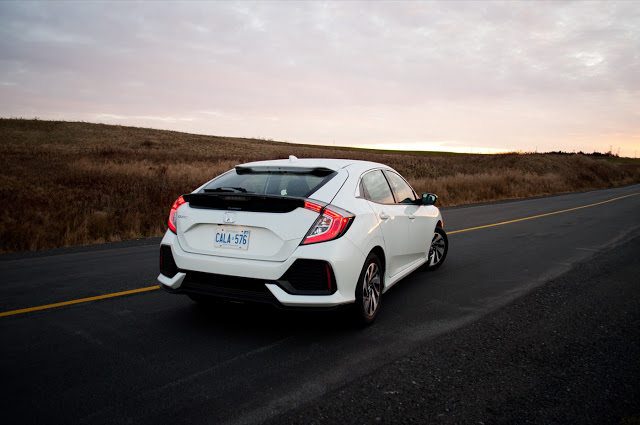 The CVT is a $1300 option you don’t need to avoid – it’s fine – but might as well. The suite of safety gear known as Honda Sensing adds $1000 to the price of a CVT-equipped LX. The Civic Hatchback Sport, with six additional horsepower and centre-mounted exhaust and plenty of blacked out trim starts at $26,885 with the manual shifter and rises to $29,185 with a CVT and Honda Sensing.

The Civic Hatchback range currently tops out with the Sport Touring: $31,085 with the 6-speed manual; $32,385 with the CVT. Expect a hi-po Civic Type R to be made available exclusively in the hatchback bodystyle later next year.

Our tester, supplied by Honda Canada, is the 2017 Honda Civic Hatchback LX with the continuously variable transmission in White Orchid.

HOW BIG IS IT?
You know how big the Civic sedan is. You can’t pull out of your driveway without seeing six of them (or driving one of them). Riding on an identical wheelbase, the hatchback loses 4.4 inches of overall length, stands nearly an inch taller, and is identically wide. The shape change, however, results in 728 litres of cargo capacity, 75% more than the sedan’s 416-litre trunk. And it’s useable space, despite the ridiculous angle of the rear windscreen indicating otherwise.

DOES IT WORK?
Relative to other compact cars, the Honda Civic – as a hatchback or not – has three main traits that work well, three that don’t.

Given its tiny size, the 1.5T is a beastly powerplant. The official specs don’t adequately convey the degree to which all of the four-cylinder’s torque is almost always available. Linked here to a CVT that reduces fun but doesn’t go out of its way to annoy you, it’s certain that this would be a ball of fun with the optional, cheaper, manual transmission. Remember that this is the basic Civic Hatchback. The last Civic SiR that came over from Britain more than a decade ago produced 14 fewer horses.

Though the Civic lacks the tactile feedback of the Mazda 3 we reviewed a week ago, this proves to be a thoroughly competent car when called upon to overperform. Brake performance is impressive, turn-in is surprisingly immediate, cornering is flat, and the Civic always feels like it’s ready to give a little more, to go a little quicker. In our example, a base LX with 16-inch wheels, the Civic Hatchback is hardly a hot hatch. But the foundation is obvious.

‘;
document.getElementById(“vinads_div”).innerHTML = lfAd;
}
});
The Civic’s responsiveness stems from the car’s impressive structural rigidity. Absent is the sensation you receive from nearly all of the Honda’s competitors that the doors are too light and tinny. The Civic is not a heavy car, but it feels weighty and significant, not like an $18,000 compact car. It’s easier to make a stiff car handle well. It’s also easier to make a stiff car sell for a higher price four years down the road.

Unfortunately, apart from space and comfort, the Civic is something of a mess inside. Visibility is poor in the hatch, but visibility sucks in most cars these days. No, the bigger problem isn’t behind you – it’s right in front. The touchscreen includes audio controls and offers no haptic feedback. Even the audio controller on the steering wheel is a nonsensical slider that could just as easily have you blasting SiriusXM’s Kids Place Live as turning down the volume to a hush. It’s an all-around ineffective system, not just from an audio perspective.

Speaking of volume, the Civic has not yet completely joined the ranks of the quiet small cars. Wind noise is kept to a minimum, but the Hankook tires hum too loudly and the engine certainly wants to make its presence known.

Those Hankooks are, as already mentioned, only 16-inchers on this LX car. Yet the Civic rides quite firmly, unnecessarily so. If the intention is to convey a sense of sportiness, Honda ought to reserve that sense for the Sport model. The wheelbase of the Mazda 3 is an identical 106.3 inches, yet the Mazda rides better and handles more adroitly, as well.

IS ANYONE BUYING IT?
Most definitely. The Civic Hatchback hasn’t been available for long and availability remains somewhat limited, but Automotive News reports that imported-from-Britain Civics made up 610 of the 4605 Civics sold in Canada in November, for example. (Civic sedan/coupe sales fell 21 percent, year-over-year.)

610 sales in November would make the Civic Hatchback more popular than the Nissan Versa, Toyota Yaris, Audi A4, Mini Cooper, and Honda’s own Ridgeline pickup truck.

American Honda and Honda Canada don’t offer a complete breakdown of Civic sales by bodystyle. The entire Civic lineup is Canada’s best-selling car in 2016, which will be its 19th consecutive year at the top of the leaderboard. The Civic is currently America’s third-best-selling car. 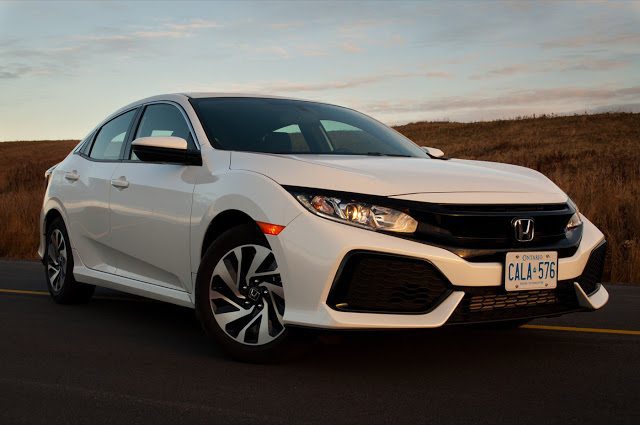 SHOULD I BUY SOMETHING ELSE INSTEAD?
We’ve suddenly arrived at a point in the industry where compact hatchbacks are the norm. The scion iM has become the Toyota Corolla iM, a hatchback Corolla. There’s a new hatchback version of the second-generation Chevrolet Cruze. The Ford Focus, Kia Forte, Mitsubishi Lancer, Mazda 3, and Subaru Impreza continue to be available as sedans and hatchbacks. The Volkswagen Golf is a preeminent example of the breed. Hyundai will bring another hatchback into the new Elantra’s fold. With the Civic adding a hatch, the Nissan Sentra stands out from the pack.

Keen drivers should pay particular attention to the Golf, Mazda 3, and Focus. The Subaru Impreza’s standard all-wheel drive is a big selling point for many buyers. The Forte’s value quotient is high. Questionable styling aside, the Civic does an impressive job of standing in the midst as an affordable, spacious, fun to drive compact hatchback, but with the kind of name recognition that garners Honda a fair number of automatic sales.

HOW MUCH SHOULD I PAY?
With a car this unnaturally unattractive, the Sport model does a great job of covering up some of the Civic Hatchback’s faults. With a dose of extra power and a manual transmission, it’d be a blast to drive, as well. 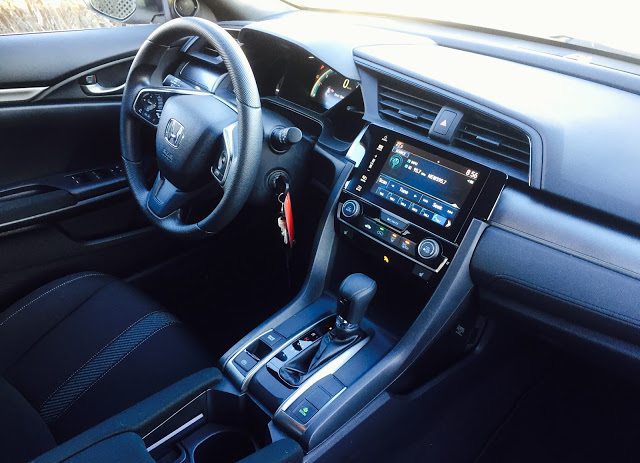 WHAT’S THE VERDICT?
I can’t hide the fact that I believe the Civic Hatchback would be a better package, and a better-looking package, if Honda elongated the roof just as Volkswagen always has with the Golf.

I also can’t deny that there are a bunch of reasons that explain why the Honda Civic is still Canada’s best-selling car. The structure is stiff, creating the atmosphere of premium solidity missing in many competitors. Pricing is sane; equipment levels are acceptable. Even with a continuously variable automatic, the transmission is inoffensive. While the Civic lacks the Mazda 3’s level of engagement and too many of the Civic’s controls are awkward to operate, the overall sense is of a car that ought to cost a bit more than its MSRP.

In five-door form, all of the qualities that make the regular Civic sedan an obvious purchase for 5,600 Canadians every month are present. But there’s a level of functionality in the hatch that’s not available in other Civics.

As a result, the Honda Civic Hatchback is the best version of Canada’s best-selling car.