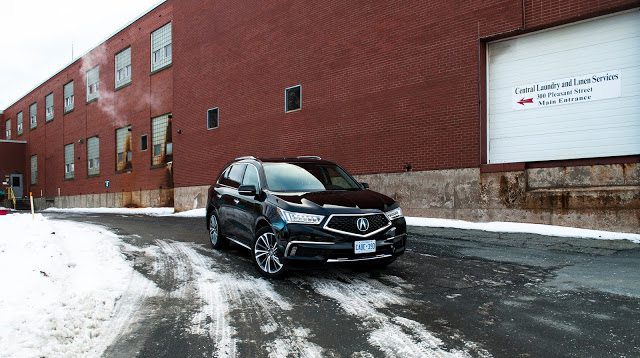 2017 Acura MDX Elite Review – It’s Acura’s Most Important Product, And Will Continue To Be

All too often, vehicles visit GoodCarBadCar at the wrong time.

Pickup trucks arrive the week after we complete basement renovations.

Performance-tired sports cars land just as we get a late spring snowfall.

Fuel-sipping hybrids remain parked in my driveway during a particularly busy week, the week before we expect to do a lot of driving.

But sometimes the PR departments and the weather and our needs align. A new vehicle arrives at GCBC Towers just in time to be put perfectly to use, to be tested just as it ought to be tested.

One such occasion was this past summer when a fourth-generation 2016 Mazda MX-5 Miata was dropped off at the beginning of a week-long stretch of sunshine, a week during which in-laws had rented a cottage 20 kilometres down a coastal route.

This time, the refreshed 2017 Acura MDX Elite was ready to hit the ground running. We’d recently brought our second child home from the hospital, we had places to be, and the grandparents were visiting from Prince Edward Island.

Could the MDX cope?

WHAT IS IT?
Acura began building the MDX in 2000, neither starting the luxury crossover trend nor arriving late to the party. A second-generation MDX arrived for the 2007 model year. Acura then replaced that MDX with a new model for model year 2014. We spent two weeks with a 2014 Acura MDX in the summer of 2013.

For 2016, Acura replaced the MDX’s six-speed automatic with a nine-speed unit from the Honda Pilot. For 2017, Acura has updated the styling, emphasized safety features, and determined to deliver a hybrid model. 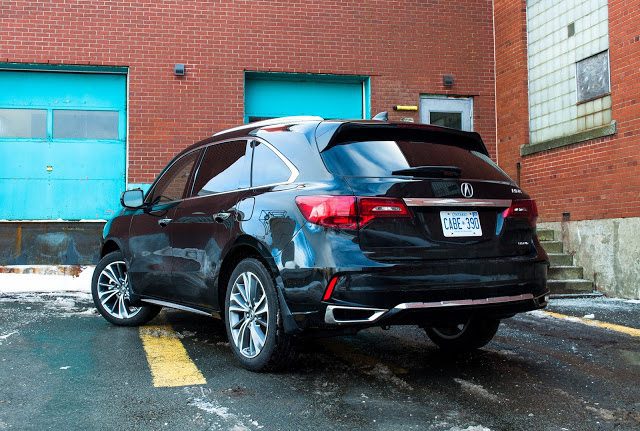 The 2017 Acura MDX that Honda Canada delivered to our driveway in mid-December was a top-trim Elite model.

In the U.S., front-wheel drive is standard; all-wheel drive is a $2,000 option. (Note: the author’s U.S.-centric review of this very MDX was already published on TTAC.)

HOW BIG IS IT?
Compare the MDX to two key alternatives to get a better sense of its size: GCBC’s favourite luxury three-row, the Volvo XC90, and the MDX’s smaller brother, the Acura RDX.

The MDX is about an inch longer, two inches narrower, and two inches lower than the XC90, but Acura claims 28% more passenger volume (really?), an identical amount of cargo volume behind the third row, and 4% more capacity behind the second row.

Relative to the two-row RDX, the MDX stands an inch taller, reaches nearly four inches farther across, and is nearly a foot longer, bumper to bumper. Not surprisingly, cargo volume behind the second row is 66% greater in the MDX.

DOES IT WORK?
Picture this. You spend a Saturday morning test driving luxury utility vehicles in the city. Unless you find some space, the rather powerful Acura MDX feels comparatively underpowered. So many competitors are artificially aspirated, but the MDX has no turbochargers or superchargers. In order to observe the MDX’s thrust, you must wind it up, rev it out, plant the throttle. This isn’t an always-on torque monster, it’s a smooth-revving V6 with a pleasant high-rev growl. (Admittedly, for a luxury crossover, too much engine noise makes its way into the cabin.)

Revs are fun, but revs are much more fun in an Acura Integra GS-R than in an Acura MDX, the kind of vehicle where you want a slug of torque just off idle. The transmission plays a role here, too. The ZF nine-speed performs admirably when you’re a demanding driver, hustling the MDX with the throttle ever closer to the carpet. But just as the 3.5L V6 lacks a happy medium, the nine-speed likewise does not know how to cooperate when you just want some power delivery. Shifts lag, a necessary two-gear kickdown takes forever, and your request for 40-60% power results in the receipt of 20% power.

This is the nature of big, naturally-aspirated powerplants and multi-gear transmissions. There’s power. But you need to work for it. The sort of instant-on torque to which we’ve become accustomed is easy; the MDX’s rev-happy ponies are periodically more fun.

That Acura would stick with a tried and true MDX powerplant mirrors Acura’s approach to the MDX’s infotainment unit. As a Honda Odyssey owner, I’ve learned to tolerate this bizarre layout that Honda is now forsaking. But it’s distinctly worse in the MDX, where there’s no fan speed control or heated seat controls outside the touchscreen. The upper screen is operated by controls positioned below the lower screen. The whole system is slow, multi-layered, and way behind the times.

Combine this old-tech approach with wind, engine, and road noise that’s marginally too high for a $68,000 vehicle, lane keeping assist that doesn’t do much keeping, rain-sensing wipers that always sense, a rear cross traffic monitor that’s always too suspicious, a blind-spot monitoring system that ‘s way too easily confused by cement barriers, a shifter that tries to be futuristic but ends up being cumbersome, and a fuzzy surround view camera and the MDX, well, feels kind of old.

The MDX also drank like an old, drunken sailor. The excuses are reasonable: we often had six passengers aboard, temperatures were frigid, remote starts were frequent, we rarely left urban areas. But at 15 L/100km, this was the worst fuel economy we witnessed in any vehicle all year. 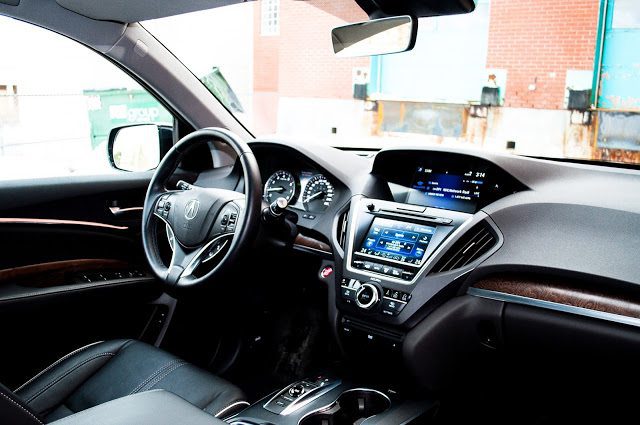 For the prospective MDX buyer who values the surprisingly athletic chassis and firm but relatively compliant ride (especially without these 20-inch wheels), who doesn’t care for the image a BMW or Mercedes-Benz sends to his neighbours, who enjoys driving enough that the rev-hungry nature of the V6 is deemed desirable, the effective use of space may be enough to cancel out the dreadful infotainment cluster and the insufficient noise reductions.

A minivan? Er, no. It’s most definitely not. But with six or seven aboard there’s still space for a load of groceries behind the third row and enough legroom for all. The same simply can’t be said for many of the MDX’s rivals, which officially list seven-seat capacity but can’t handle any accompanying cargo and likely can’t take seven real humans, either.

‘;
document.getElementById(“vinads_div”).innerHTML = lfAd;
}
});
IS ANYONE BUYING IT?
Among premium-branded three-row utility vehicles, only the BMW X5 sells more often in Canada than the Acura MDX. Canadian sales of the MDX fell 5% through the first 11 months of 2016 after falling to a three-year low in 2015.

South of the border, U.S. sales of the MDX are also down 5% this year but have been ramping up of late, rising in each of the last four months. Among premium-badged nameplates, no three-row SUV/crossover outsells the MDX in America.

SHOULD I BUY SOMETHING ELSE INSTEAD?
Let’s assume you want three rows, proper power, and a premium badge. The BMW X5, Audi Q7, Infiniti QX60, Land Rover Range Rover Sport, and Volvo XC90 are top contenders outside of the body-on-frame sphere. Even a basic X5 optioned up to mirror the MDX would cost more than $80,000. A mid-grade Q7 Progressiv with the 3.0L engine and equipment levels similar to this MDX will cost in excess of $75,000.

The Infiniti QX60 is much more affordable, but the powertrain – a down-on-power V6 married to a CVT – removes all joy from the proceedings. The Land Rover Range Rover Sport’s available third row is tiny.

The Volvo XC90, likewise, isn’t vast inside, but the XC90 provides a decidedly premium experience and is sufficiently affordable. 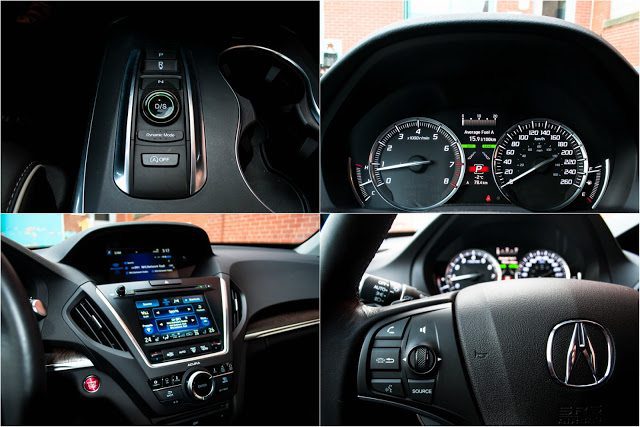 HOW MUCH SHOULD I PAY?
With only five MDX variants – the fifth merely being a six-seat version of our Elite tester – your specification choices are typically Honda-limited. Second from the top, the 2017 Acura MDX Tech likely represents the best value.

For a $6500 leap beyond the basic model and a $3000 move up from the MDX Navi, the Tech includes perforated leather, rear seat entertainment, heated second-row seats, upgraded audio, power-folding mirrors, and rear sunshades.

WHAT’S THE VERDICT?
The Acura MDX is justifiably popular. Though feeling aged in a segment where second iterations of the Audi Q7 and Volvo XC90 feel markedly more modern, the MDX continues to play its premium value card.

Of course, if value is the main concern, you can get more vehicle for the money in a $53,115 Honda Pilot Touring.

But that semi-premium Acura badge hold sway. Combine the 2017 Acura MDX’s upmarket pretensions with a pleasant ride and handling balance, plenty of naturally aspirated power, room for a family, and features galore. The result: a particularly appealing crossover in the light of its competitors’ price points.

Priced alongside an Audi Q7, the MDX’s lack of occasion would be unfortunate. But with significant savings, it’s not surprising to see that 500 Canadians drive home in a new Acura MDX every month.

Timothy Cain is the founder of GoodCarBadCar.net, which obsesses over the free and frequent publication of U.S. and Canadian auto sales figures. Follow on Twitter @goodcarbadcar and on Facebook. The MDX was supplied by Honda Canada’s press office.