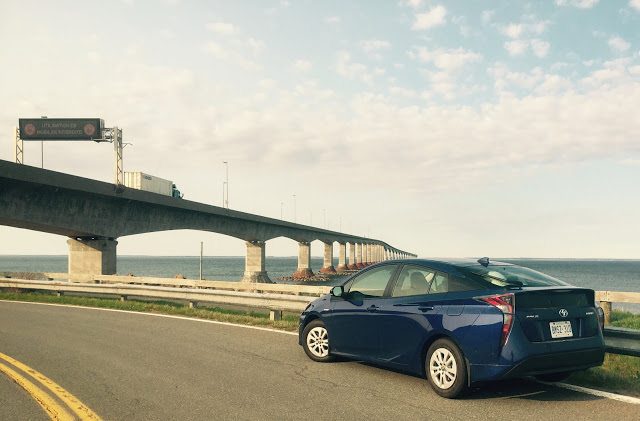 2016 Toyota Prius Review – More Efficient Than Ever, But Not All About Efficiency

The long Victoria Day weekend annually presents us with a prime opportunity to venture 300 kilometres from Eastern Passage, Nova Scotia, to Summerside, Prince Edward Island, and back. This year, that opportunity presented itself in conjunction with our week-long test of the all-new 2016 Toyota Prius, a car we’d already been driving for a few days.

In an urban environment, the new Prius was overachieving, not only in terms of fuel economy but in the way it simply didn’t offend my enthusiast sensibilities.

During that period, a stretch in which we put far more mileage on the Prius than is the norm, we pumped fewer than 50 litrs of fuel into its tank, an end result of 4.1 L/100km.

That’s what the Prius accomplished during a week with our growing family. But how did it fare during the process?

We answer that question by responding to seven more in this GCBC Driven Review of the $28,375 2016 Toyota Prius.

WHAT IS IT?
The dawn of the hybrid craze was crafted by Toyota in 1997, whent he first-generation Prius combined electric and gas power. Originally seen as a niche alternative to the two-seat Honda Insight, the Prius entered the American mainstream in second-gen form. More than 180,000 Prii were sold in the United States in 2007 alone.

In its third iteration, the Toyota Prius gradually became less popular in the U.S., in part because of other Prii, the smaller Prius C and larger Prius V.

Now the fourth Prius – sometimes thought of as the fifth, because the first-generation Prius envelopes two iterations – is more efficient, more refined, and more livable. And so it must be. With fuel prices now consistently low and a broad spectrum full of potential alternatives – including Toyota’s own Camry Hybrid – the Prius is unlikely to soon regain the kind of success displayed by the first hybrid a decade ago.

Our test specimen is a 2016 Toyota Prius starts at $27,785 but was optioned up with the $590 Upgrade Package: heated front seats, pre-collision, lane departure alert, auto high beams, adaptive cruise control.

But don’t confuse the Prius’s tidy exterior dimensions with a cramped interior. By no means is the Prius’s rear seat as vast as the Camry’s, but there are 697 litres of cargo capacity behind the Prius’s second row of seats, 60% more space than you’ll find in a Camry’s trunk.

Unfortunately, I never found the driver’s seat stretched back far enough for my lanky frame. This didn’t detract from the level of spaciousness enjoyed by other Prius passengers, but after 1200 kilometres, my hips were crying out for replacement.

DOES IT WORK?
Expecting the Prius’s fuel economy focus to create issues in the on-road experience, I was surprised day after day by the fourth-generation Prius’s all-around manners. The ride is very compliant. Power, what there is of it, comes on stream early and with sufficient force. Vibration is kept to a minimum – only moments of powertrain changeovers cause some buzzing in the throttle pedal. The cabin always remains quiet. It’s all fine and good for the home-to-work, work-to-home commute.

The Prius certainly won’t compel you to take the long way back. There’s a degree of float, particularly when the rear axle meets uneven pavement mid-corner, not typical in cars of 2016. The Prius therefore never feels comfortable being asked to give a little more, to grip a little tighter, to tuck in its nose with more aggression. Just back off, the Prius says, let’s take it easy.

And for the driver seeking out maximum economy, it makes little sense to consistently force the Prius to work harder, thereby minimizing efficiency. There is a Power mode, but the throttle becomes unnaturally jumpy. You might as well skip the Normal drive mode, too, because Eco is what it’s all about.

Visibility remains a sore point because of the split rear windshield. Not as obstructive as your eyes tell you it is, the split is nevertheless annoying. The Prius is also slathered with chintzy bits, the kinds of things you’ll notice when shutting the clinky rear doors or putting your sunglasses away. The sense you get from the Prius’s interior is one of lightness, a boon for fuel economy. But that sense of lightness isn’t disingenuous – all the factors which go into making the Prius an aerodynamic featherweight are noticed in the lightest of crosswinds, as the Prius begins to waver about inside its own lane. 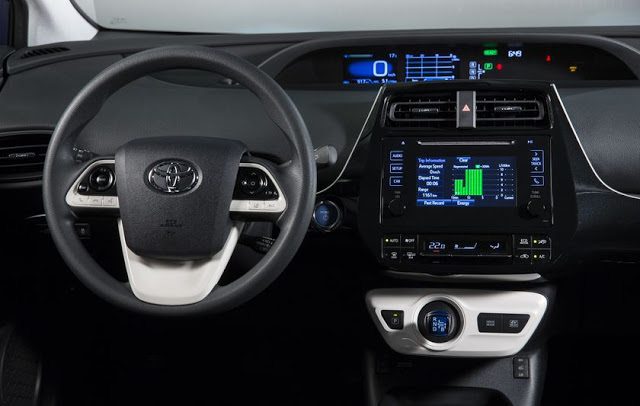 As for the technical interface, we don’t like the centre-mounted instrument cluster, not only because of its location but because of the constant warnings it throws up which distract the driver from the road ahead, a stupid thing for vehicular warnings to do. Oh, you turned on cruise control? Warning: cruise control should only be used on highways.

Thanks, but no thanks, Prius.

But there were also a handful of technical difficulties. The doors refused to unlock for an extended period one morning last week, and when the driver was finally allowed in, the fob and interior locks still wouldn’t unlock the other doors. There were also some moments in which the toushcreen utterly failed to function, as songs being played through Bluetooth audio were skipping about wildly while the screen itself refused to respond to any inputs or display the fact there was even audio playing.

Technical challenges, uncomfortable seats, and some less than impressive switches, body parts, and trim don’t make the Prius feel like a $28,000 car, particularly since it struggles in the wind like the subcompacts of yesteryear. But the right green car buyer may be comfortable assuming that this is price you pay for outrageous efficiency.

IS ANYONE BUYING IT?
In Canada, the Prius remains a low-volume Toyota even as, year-over-year, sales jumped 116% over the last two months. Only 679 copies of the Prius were sold in the first four months of 2016 – Toyota Canada sold more than 2000 4Runners during the same period.

In the United States, where Prius sales over the last decade were 51 times stronger than sales of the Prius in Canada – the market as a whole isn’t quite 10 times larger – the new car’s volume hasn’t taken a turn for the better. Yet.

‘;
document.getElementById(“vinads_div”).innerHTML = lfAd;
}
});
SHOULD I BUY SOMETHING ELSE INSTEAD?
Noteworthy fuel efficiency can be had with joyful dynamics in Ford’s charming C-Max Hybrid. But the C-Max isn’t as spacious, nor does it feature a particularly modern set of features.

A number of conventional midsize cars are available with hybrid powertrains, from the Toyota Camry to the Ford Fusion, Hyundai Sonata, Kia Optima. But none of those cars offer hatchback flexibility. Volkswagen’s diesels are hardly in the running now.

For the buyer who simply wants to save money in the transportation line of the budget, a look at popular compact hatchbacks is the purest route. A Scion iM is the Toyota of choice for the real penny-pinching Toyota hatchback buyer. For the green car enthusiast, however, the fourth-generation 2016 Toyota Prius is more worthy of affection than ever before.

HOW MUCH SHOULD I PAY?
If you want alloy wheels with some semblance of grippy tires, you’ll either live in (or move to) one of Canada’s three biggest cities or install a set yourself. Regardless of option packages, the Prius and Prius Technology both look dreadfully cheap on ugly wheel covers with tall tires.

But every new Prius is astoundingly efficient and equally powerful, no less of a car than any other aside from the level of kit. If the point of your Prius purchase is to save on fuel, the lightest, least luxurious Prius will be the one to have. It’ll also be the way to turn your fuel savings into a real financial benefit, too.

WHAT’S THE VERDICT?
Regardless of the sacrifices made to reach extreme levels of efficiency, there comes a point out which the driver of a 2016 Toyota Prius sits back and says, “Wow. 4.1 litres per 100 kilometres.” Which doesn’t sound nearly as profound out loud as it looks on the Prius’s onboard computer.

Fortunately, the fourth-generation Prius is far from full of sacrifices. Serene ride quality, a quiet and roomy cabin, sufficient power, and abundant safety kit are not the kinds of qualities one lists in the “Sacrifice” column.

Yes, the fourth Prius remains enormously dull to drive. There is no sense of joy, no desire to hustle through a corner, no yearning for better mountain roads or pointless journeys up the coast.

There is simply accomplishment.

“Look at that, dear owner of mine,” the new Prius seems to say. “The journey is done. With ease and frugally, if I do say so myself.”

Timothy Cain is the founder of GoodCarBadCar.net, which obsesses over the free and frequent publication of U.S. and Canadian auto sales figures. Follow on Twitter @goodcarbadcar and on Facebook. The Prius was supplied by Toyota Canada’s press office.