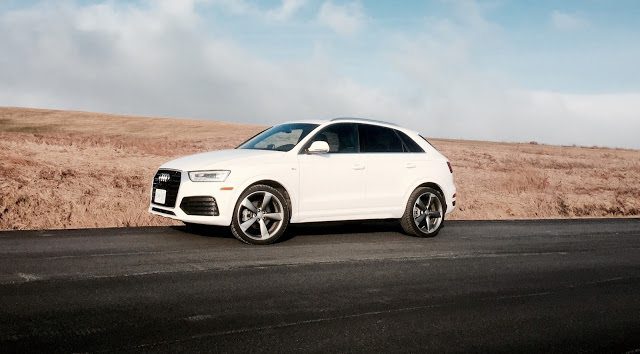 A decade ago, Audi was only just beginning its SUV incursion.

Mercedes-Benz and Lexus were in the game nearly a decade earlier. BMW took part in the festivities before the turn of the millenium. By the time Audi added to its Q7 by initiating the launch sequence for its hugely successful Q5, BMW was readying its fourth SAV, the X1, the smallest of the small.

But arriving late to the party doesn’t mean you can’t have just as much fun. Audi now builds Canada’s top-selling premium utility vehicle, produces more than six out of every ten of its Canadian sales with Q models, and has all but secured its reputation as a purveyor of reliable goods.

The 2016 Audi Q3 isn’t the final feather in Audi’s SUV/crossover cap. The Ingolstadt-based, Volkswagen-owned automaker has already revealed a smaller entry, the Q2, and Audi’s unlikely to stop there.

For now, however, consumers who wish to drive a new Audi utility vehicle see the Q3 as their most affordable option. Is it worth considering?

WHAT IS IT?
Although the first-generation Audi Q3 didn’t arrive in Canada until the third quarter of 2014, it’s closely related to the first-generation Volkswagen Tiguan that arrived in Canada in 2008. That’s right, the Q3 isn’t the freshest piece of fruit in the basket, having gone on sale in Europe in 2011.

The Q3 is by no means identical to the Tiguan with which it shares a powertrain and wheelbase, nor does the Q3 resemble the Mk5 Golf on which the current Tiguan is based. But Volkswagen dealers are currently selling a seventh-generation Golf that went into production in 2012, a car with which Audi’s excellent A3 shares a platform. At the very least, these facts provide a sense of the Q3’s architectural age. 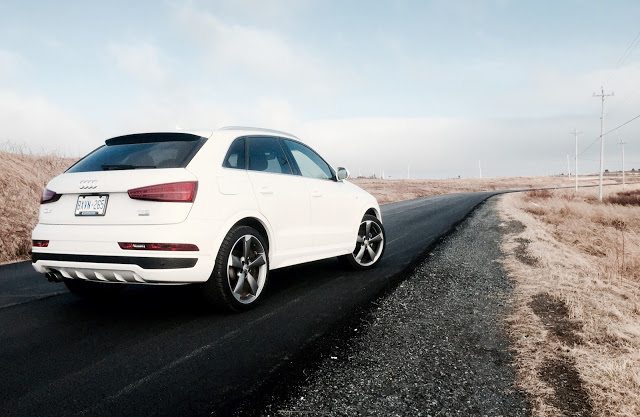 Our Q3 tester added to that $42,795 MSRP an additional $2500 worth of Quattro all-wheel-drive plus $800 20-inch wheels, a $1900 navigation package, and an $1850 sport package which includes 19-inch wheels – which you’ve just paid for and then cancelled out with $800 20-inch alloys – paddle shifters, some cosmetic enhancements, and excellent sport seats with four-way lumbar for both driver and passenger.

HOW BIG IS IT?
The Q3 isn’t the smallest urban crossover, but it’s certainly not a big vehicle. The Mazda CX-3, for example, is 4.5 inches shorter, bumper to bumper. The Honda HR-V is a couple inches narrower. The Buick Encore’s cabin is 10% more capacious. The Fiat 500X’s cargo area is 11% larger. With seats folded, the Honda HR-V’s seats-folded capacity is 16% greater than the Q3’s.

Of similar importance is the Q3’s dimensional relationship to the Audi Q5, a more traditionally sized utility vehicle that sits above the Q5 in Audi’s three-pronged Q lineup. With an extra 10 inches of length, three inches of width, and a wheelbase stretching nearly nine extra inches, the Q5 provides 20% more space for passengers, a more apparent 74% increase in cargo volume, and 19% more cargo volume behind the front seats.

DOES IT WORK?
The Q3 is small. That’s good and bad. In fact, it may simply be good for car buyers who don’t want to squeeze teenage passengers in the back or lug large loads home from Home Depot.

On city streets, the Q3 is delightfully maneuverable, always primed for quick changes of direction, and capable of packaging itself into parking spots that a Q7 owner would assume were left only for motorcycles. The Q3 is that small – the Honda Civic we drove earlier this year is nearly a foot longer.

But while the Q3 is tiny on the outside and only barely big enough inside, it’s no featherweight. That 1.5T Civic, for example, had 730 fewer pounds to cart around, creating a power-to-weight ratio superior to this 2.0T Q3.

There are 2.0L turbocharged four-cylinder engines sold in Audi showrooms which produce 292 horsepower. The Q3’s 2.0T is a 200-horsepower unit, quite grumbly at low revs, and demands premium fuel. This isn’t a slow car, but the Q3’s accelerative force doesn’t live up to the sporty looks or the modern promise of turbocharged inline-fours.

The Q3’s somewhat neutered powerplant isn’t the only part of the little Audi that doesn’t feel fresh. Antiquated would be far too harsh a word, but the Q3 doesn’t come across as terribly current. The wonderful Audi MMI unit which crawls out of the dash and is controlled by centre console controls in other Audis is missing here – you’ll operate a simpler unit with vertical controls in the Q3. The sport seats are terrific, but the seating position will feel strangely chair-like, not seat-like. Noise levels may seem appropriate at the Q3’s price of entry, but not when it’s optioned up to $50K.

Don’t take this to mean that the Q3 is merely enough – roomy enough, powerful enough, nimble enough, luxurious enough. It smells like an Audi, has the material quality we’re accustomed to in Audis, and is built with the structural integrity we love about all Audis. 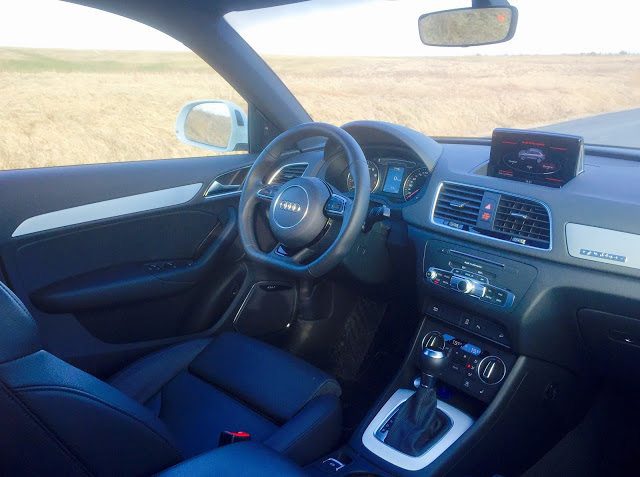 And if there is one chief complaint in the Q3’s small universe, it may relate specifically to this Q3, shod with wide, low-profile rubber on gorgeous 20-inch wheels. These are optional upgrades that more closely resemble black rubber bands stretched over wheels tailored for a Cadillac Escalade. The ride quality isn’t atrocious, but it did cause our two-year-old to complain that every road was a rough road. (Admittedly, along the Atlantic coastline, many are. But not all.) GCBC’s future editor-in-chief is no Mike Cross, but little Mr. Cain is wise enough to know that the kind of jostling necessary to put him to sleep 18 months ago is just plain annoying now.

Our advice? Skip the 20s, allow the Q3 to maintain its composure on 18s, and if you must spend $800 for optional alloys, don’t assume that 255/35R20 Dunlop Winter Sport SPs are suitable for regular heavy duty winter driving. We were slip-sliding every which way as if the Q3 was a rear-driver on summer performance tires. 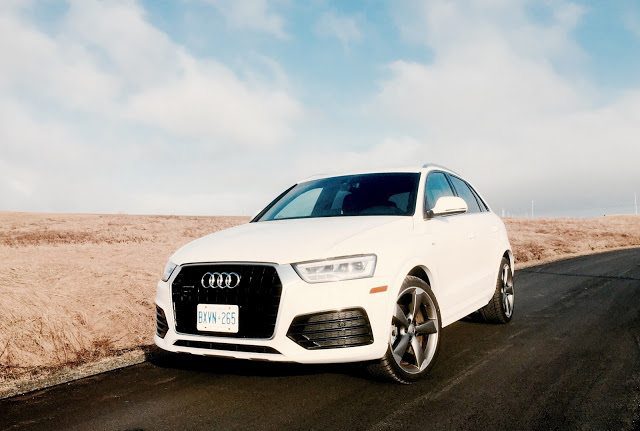 IS ANYONE BUYING IT?
In 2015, the Q3’s first full year in North America and a record year for the auto industry and the Audi brand in the U.S. and Canada, five different Audi nameplates sold more often than the Q5 in America; three in Canada.

In the U.S., the Q3 still managed to seriously brighten Audi’s numbers. With the Q3, Audi USA volume jumped 11% in 2015, easily outpacing the industry’s growth. Non-Q3 Audi sales were up 6%, in line with the market’s climb. In its segment, the Q3 was roundly outsold by the Mercedes-Benz GLA but trailed the transitioning BMW X1 – there’s a new X1 now – by a narrow margin.

In Canada, 13% of Audi’s volume in 2015 was Q3-derived. Well ahead of the BMW X1, the Q3 trailed the Mercedes-Benz GLA by only 123 units in the race to top the entry-level luxury crossover category.

Through the first two months of 2016, the Q3 is America’s 77th-best-selling SUV/crossover. The Q3 ranks 57th in Canada.

SHOULD I BUY SOMETHING ELSE INSTEAD?
Even with the addition of the Q3 to Audi Canada’s lineup in late 2014, Q5 sales did not drop. In fact, Q5 sales rose 4% to 8203 units, enough to lead all premium brand SUVs and crossovers in Canadian sales in calendar year 2015.

At its base price of $44,695, the Q5 comes standard with Audi’s Quattro all-wheel-drive. It’s roomier, more refined, and more conventionally attractive.

If premium badges like Audi’s four-ring emblem mean nothing to you – and in that case, one wonders why you’re interested in a Q3 – loaded examples of volume players such as the Kia Sorento SX Turbo and Ford Escape Titanium EcoBoost excel in terms of interior kit and/or on-road behaviour. Care to keep it small? The Mazda CX-3 is tiny inside, but it’s a riot to drive. CX-3 pricing tops out below $33,000. 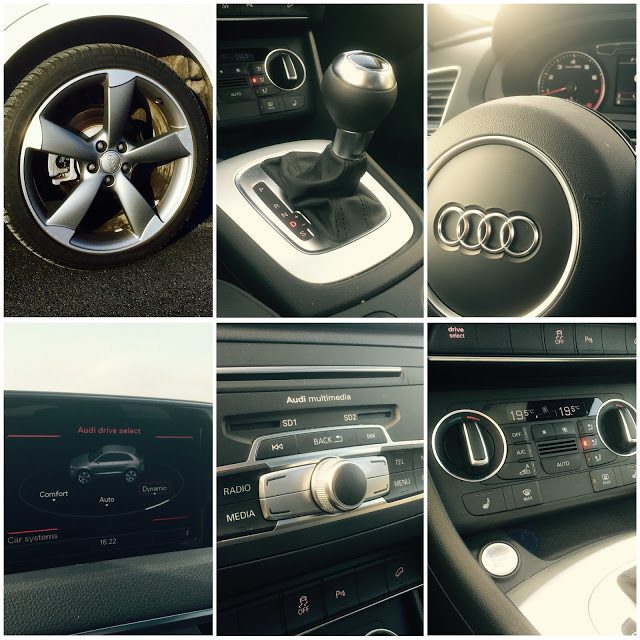 HOW MUCH SHOULD I PAY?
No matter how well the Q3 is equipped in comparison with a comparably priced Q5, once the Q3’s out-the-door price leaps beyond the Q5’s base price, the situation becomes untenable.

WHAT’S THE VERDICT?
The Q3 is neither a masterclass in luxury nor a testament to the U in SUV; it doesn’t blend an exceptional on-road dynamic repertoire with genuine off-road credentials.

But the 2016 Audi Q3 does land smack in the middle of the current auto market’s desirability intersection. A premium badge, an affordable base price, competent on-road manners, eye-catching design, elevated ride height, and four winter-friendly driven wheels is more than sufficient to engage enough buyers to make the Q3 highly profitable.

Yet just as too many subcompact cars fail to make a case for themselves when it comes to monthly payments and fuel efficiency – thus driving customers one size up in power, space, and refinement for scarcely any extra money – so too do these smallest of utility vehicles fail to make a convincing argument that their larger brethren aren’t 50% more vehicle for 20% more money.

There’s a reason the Audi Q5, on sale since 2009, continues to be far more popular than the Audi Q3. You can afford to spend a little bit extra to drive a lot more Audi. The Audi Q3 is a fine piece of kit, but it would have to be downright exceptional to avoid this conclusion.

Timothy Cain is the founder of GoodCarBadCar.net, which obsesses over the free and frequent publication of U.S. and Canadian auto sales figures. Follow on Twitter @goodcarbadcar and on Facebook. The Q3 was supplied by Audi Canada’s press office.