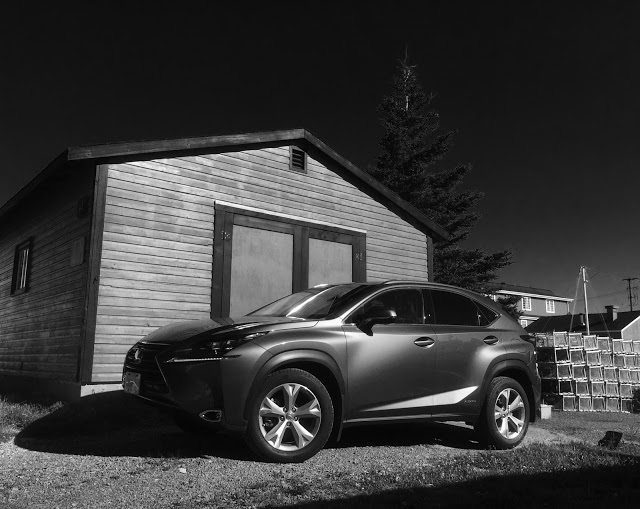 Clearly, something’s working. You do, after all, build a best seller.

Yet clearly you could do more, because your two other SUVs aren’t doing squat.

That was Lexus’s situation at this time last year. 90% of the utility vehicles sold in Canada by Lexus during the first seven months of 2014 were RXs. The RX accounted for 45% of the brand’s total volume.

So again I say: Imagine. Imagine what could Lexus do with just one more hit.

We’re finding out. The 2015 Lexus NX isn’t the prettiest gal in the dance hall, but she stands out from the pack. The NX isn’t the sportiest small luxury crossover, but it’s certainly far more agile than you thought it would be.

As a result of the NX’s ostentatious design and pleasing dynamics and Lexus’s sterling reputation, Toyota Canada is currently selling more vehicles out of its Lexus branch than at any point in the brand’s 25-year history. Lexus delivered one more hit.

But just because the marketplace thinks the NX is a winner, will we? We spent one week with the most fuel efficient SUV in North America, the 2015 Lexus NX300h, to find out. 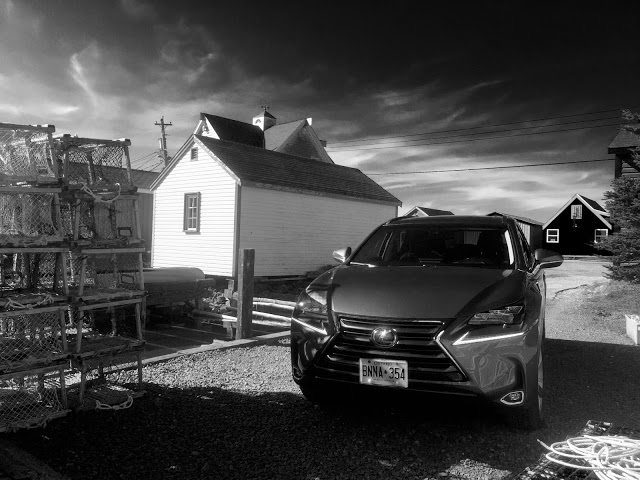 WHAT IS IT?
All too often, automakers display concepts at major auto shows followed by production versions which simply aren’t as attractive.

But when it comes to the LF-NX Concept from the Frankfurt show in 2013, the production version is most assuredly the less revolting vehicle.

Positioned below the supremely popular RX in Lexus’s four-pronged SUV/crossover lineup, the NX became the entry point in Lexus’s utility vehicle division when it went on sale just before Christmas last year.

Most of the NX’s you’ll see will be of the NX200t variety, featuring a turbocharged 2.0L four-cylinder generating 235 horsepower. The Canadian base price for the NX200t sits just below $44,000.

The NX300h comes standard with much of the NX200t’s optional equipment and starts above $60,000. It also consumes 25% less fuel than the non-hybrid NX. All NXs bound for Canada are assembled in Miyawaka, Fukuoka, Japan, and are fitted with all-wheel-drive, a $1400 option in the United States. Although the NX is related to the Toyota RAV4, it’s abundantly clear that this is no twin. Not only are the powertrains and styling different, the interior is leagues beyond the RAV4’s.

HOW BIG IS IT?
Compared with America’s best-selling utility vehicle, the Honda CR-V, the 2015 Lexus NX is three inches longer, one inch wider, and three-tenths of an inch shorter. Yet inside, there’s 30% less space for humans and 55% less space for cargo behind the rear seats.

Dimensions sometimes lie. And in the case of occupant space, the NX feels roomier than the figures suggest. Yet the cargo area is nearly filled by a wheels-attached Baby Jogger Summit X3. The Lexus RX450h isn’t even half-a-foot longer than the NX300h, but Lexus says the RX’s cargo area is more than double the size.

DOES IT WORK?
Who knew a hybrid Lexus SUV could be moderately fun to drive?

Who knew a mouse-like touchpad could be this ineffective?

Who knew a 15-foot-long crossover could be this compact inside yet still remarkably comfortable?

The NX300h is a bit of a mystery. Any buyer expecting nothing more than a shrunken RX will be in for a shock, as the NX’s demeanor when driven swiftly testifies to the fact that Lexus wanted to build a distinctly athletic crossover this time around.

The NX300h is neither decidedly quick nor in desperate need of more power, the brakes (as is common in hybrids) lack the feel that’s so vital for a performance vehicle, and we are still talking about a vehicle with an elevated centre of gravity. But the NX’s quick and accurate steering, level-headed chassis, and firm ride construct a real surprise. 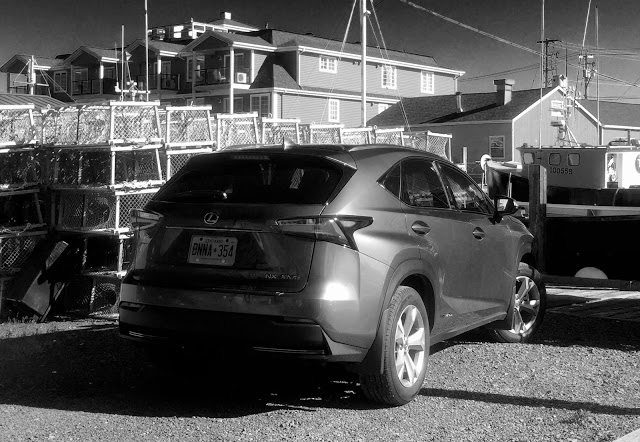 The NX300h is still too small inside for, say, young families. That’s not to say humans won’t be comfortable. The front seats are the best I’ve sat in this year, not only because of the range of adjustability but because of the perfect compromise between firmness and softness in each and every cushion.

If the seats are the best aspect of the driving environment, the centre-mounted touchpad is the worst. There will be car buyers who are so excited by the contemporary atmosphere that they’ll be willing to overlook this unnecessary “advancement.” For me, it’s yet another step away from that which works. If you want to keep your eyes on the road – and you really should try – conventional buttons are useful because your fingers will send accurate messages to your brain based on the texture and placement they’ve encountered. Touchscreens are acceptable because the icon locations don’t change, enabling an owner to instinctively remember the reach that’s required to punch a particular icon. A touchpad, on the other hand, requires you to look away from the road to see where your mouse is located before making a selection. Fortunately, the NX does have conventional buttons and knobs for a number of key functions, and those controls make the NX interior tolerable.

One way or another, owners typically become accustomed to interior layouts. Moreover, it’s not surprising that a luxury automaker produced an unnecessarily convoluted centre stack. Lexus’s ability to build an NX300h which displays on-road behaviour more akin to an IS350 than an RX350 is, however, rather surprising. That’s not a bad thing.

IS ANYONE BUYING IT?
Lexus prepped the launch of the NX very nicely. From the get-go, NXs were flying off dealer lots because dealers had NXs to sell. In the U.S., 27,313 copies of the NX200t and NX300h have been sold in little more than eight months. It accounts for 13% of the brand’s sales so far this year. 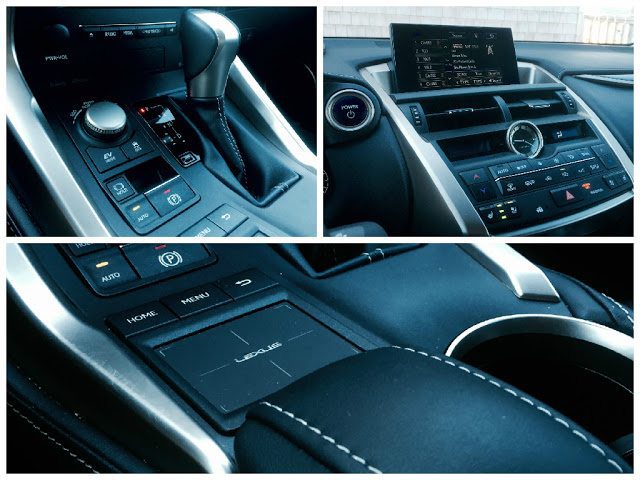 In Canada, the NX is Lexus’s second-best-selling model and generates 25% of the brand’s volume. Through the first seven months of 2015 in Canada, the NX is outselling the BMW X3, Lincoln MKC, and the Volvo XC60, among others. Among direct rivals, only the long-established Audi Q5, Acura RDX, and Mercedes-Benz GLK are more popular than the recently launched NX.

SHOULD I BUY SOMETHING ELSE INSTEAD?
Few new vehicle categories are as filled with viable candidates as the NX’s small luxury SUV/crossover segment. Care for something handsome? The Audi Q5, BMW X3, and Mercedes-Benz GLK are lookers. The Porsche Macan S is an elevated sports car. Land Rover’s Discovery Sport can seat seven in a pinch. The Acura RDX is a strong value.

Buyers who prioritize durability, quality, and reliability will still have a difficult time avoiding the Lexus showroom.

HOW MUCH SHOULD I PAY?
Much as the NX is the more pleasurable of Lexus’s two crossovers to drive, discounts on remaining third-generation RX450h’s make the NX300h’s price unpalatable. Toyota Canada is currently marketing leftover RX450h Sportdesigns with a total of $6000 in incentives, pulling the larger Lexus hybrid crossover’s price down below $60,000, a couple grand less than this NX300h.

There are other reasons for thinking the NX300h should be less costly. Yes, Lexus builds an impeccably smooth hybrid powertrain, the CVT isn’t offensive, and the fuel economy is frankly startling for a vehicle of this type. But the most handsomely equipped non-F-Sport NX200T costs $6200 less than this hybrid.

$6200 buys a lot of fuel. Not that it matters if you, like me, wouldn’t be able to get over the looks, or the touchpad, or the limited cargo area, all of which are limiting factors in both the NX200t and NX300h.

Timothy Cain is the founder of GoodCarBadCar.net, which obsesses over the free and frequent publication of U.S. and Canadian auto sales figures. Follow on Twitter @goodcarbadcar and on Facebook. The NX300h was supplied by Toyota Canada’s press office.