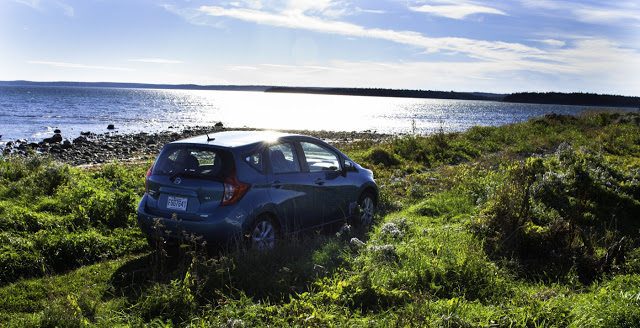 2014 Nissan Versa Note SL Review – Limo In The Back, Subcompact In The Front

If the 2014 Nissan Versa Note had the Kia Rio’s looks, the Chevrolet Sonic’s engine, and the Ford Fiesta’s on-road dynamics, I’d be more than willing to say that this car represented the best family car value in today’s automotive marketplace.

You better believe it. The Versa Note has a roomy luggage compartment and a cargo area that’s plenty flexible for trips to Home Depot when the kids are left at home on Saturday morning. The rear seat is spacious enough for the kids to stretch out, leave backpacks at their feet, and squeeze Grandma in between to stop the tickle fights which only end when little sister gets poked in the eye. Oops.

That spacious rear seat is the Versa Note’s calling card. Because all this space can be had at such a low price, other family-friendly cars simply can’t compete with the Note when it comes time for a young couple to make their bi-weekly car payment.

Small crossovers don’t feature rear seats as spacious as this, and their base prices are much, much higher.

Neither are bigger compact sedans which approach the Versa Note’s affordability quotient  as capable at hauling infant car seats without a massive shift in front passenger comfort.

Why pay so much attention to the Versa Note’s rear seat? For a family that needs a new car but can’t afford the type of vehicle families typically require, the Note accomplishes so much at a bargain basement price.

We’re not naively taking Nissan’s claims about the Note’s rear seat at face value. (Granted, Nissan’s own measurements say the subcompact Versa Note’s rear leg room is superior to the rear leg room in the compact Sentra, the midsize Altima, and the company’s flagship sedan, the Maxima.)

I actually spent a good bit of time in the Versa Note’s aft cabin, figuring out how many different ways I could get comfortable, crossing legs, stretching legs, slouching, and never moving the driver’s seat farther forward than I myself, at a hair under 6-feet tall, would require.

It only made sense to sit in the back of the Versa Note for a while. It’s a lot more comfortable and distinctly more enjoyable than sitting up front.

More than just lacking in feel, the Versa Note’s electrically-assisted steering also goes as far as to obstruct the experience. Requiring constant course correction and an excessive amount of input, the Note’s steering alone is enough to convince enthusiasts that this isn’t a driver’s subcompact. What’s worse, the brakes, while engaged with a very firm pedal, don’t stop the Note with the kind of immediacy expected from, you know, brakes.

As for acceleration, the Versa Note is indeed tepid, but the CVT isn’t a detriment to progress. Nissan has worked hard to make CVTs feel like normal automatic transmissions. This CVT doesn’t feel completely normal, and I’d certainly prefer a manual shifter in a subcompact, but it’s not a reason avoid the Note.

No, it’s the 1.6L’s utter lack of punch as speeds rise that feels so very last-gen in an era when subcompacts often have the power of their more expensive compact brethren. For reasons that may pertain to our Versa Note tester’s green engine or the very brief city drives it completed while in our care, the fuel economy it returned was terrible even by large crossover standards. However, I’m slow to judge a car’s poor fuel economy when the test period is brief and we come up so far short of the EPA ratings. 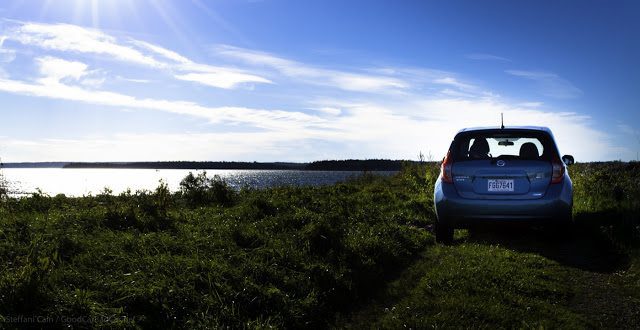 Nevertheless, the 1.6L four-cylinder is a quiet part of a surprisingly quiet car. The Versa Note’s hushed cabin bears little resemblance to the subcompacts that have come before. It’s not a Lexus LS600hL in terms of utter silence; nor is it a late-80s Micra.

Noise, vibration, and harshness aren’t the only means by which we judge a subcompact’s cabin. In 2013, we expect a bit of softness, a measure of prettiness, a healthy dose of features. The Note possesses the latter but misses out on the charm. Perhaps that’s alright, as the buttons and knobs and stalks, while crude, feel as indestructible as a Tonka dump truck’s wheels. 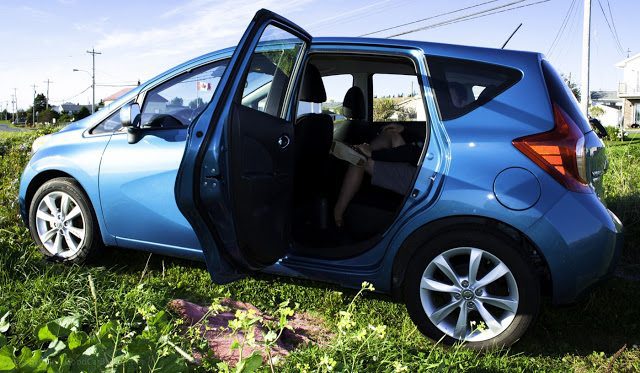 Nissan’s very useful Around View Monitor is displayed on a 5.8-inch screen, limiting the possibilities of a detailed image, which is where AVM would be most helpful. While there are loads of stuff in this top-of-the-range car – keyless access, heated seats, navigation, 16-inch alloys – there ought to be for $20,000, and the Note shouldn’t go without automatic headlights or cling-free seat fabric. That fabric upholsters seats which are too slim even for lanky ol’ me and. On the passenger’s side, the seat also sits too closely to the wheelwell and engine bay.

Including the first-gen Versa sedan and hatchback, this new Note is the best-looking car of the four Versas we’ve seen to this point. Admittedly, that isn’t saying much, but the 2014 Note does have decent presence on Nova Scotian roads which are full of chock-full Accents, Aveos, and Versas.

The Versa Note isn’t light on its toes like a Fiesta or perky like the Chevrolet Sonic. Yet the family which only just fits in a Versa Note will likely find competing subcompacts insufficient for family use or too costly.

Time in the driver’s seat only clarifies the fact that the 2014 Nissan Versa Note is a budget-driven purchase. But that doesn’t necessarily make it a bad one. Though far from perfect, it is the subcompact for those who need a gigantic subcompact.