Question of the day: what does the 2014 Kia Forte say about the future status of luxury auto brands?

I’ll admit, part of this question stems from the fact that I spent the last week driving a Forte SX, the most well-equipped Forte, one that costs more than $26,000 in Canada. Of course, not all second-generation Fortes are created equal. They start at $15,995 on steel wheels.

There are two other reasons the 2014 Forte caused me to wonder about next year’s or next decade’s class warfare, however. One relates to the current commitment of most luxury automakers to dive downmarket, chasing paupers with sub-$30K USD pricing and pleather. The other was brought on by the atmosphere inside the new Forte.

Remember your first meeting with a compact Kia? Mine was with a second-generation Sephia which was owned by the least talkative guy who had ever boarded at my parents’ house. It was dreadful. In what way was it dreadful? It was dreaful in every way.

By the time the 2005 Spectra rolled around, Kia’s compact had become livable. It won’t go down in history alongside the original Mini and Fiat 500 as one of the planet’s great and revolutionary small cars, but it was big inside and made for a decent highway car. Next up, the first Forte had clean and classy lines, but its sometimes brittle ride and outdated interior left something to be desired.

Here we are then in the first Forte’s replacement, the successor to that original Sephia, the 2014 Kia Forte SX. Above all else, the new Forte feels really nice. Again, power seats with two memory settings helps. (The driver’s seat glides back to allow easier entry and egress but then powers back to the driver’s preferred placement once the start button is pressed, like an expensive car does.) So does a heated steering wheel. So do the heated rear seats. And the driver’s cooled seat, which even in our northerly climes is at least as useful as heat for the sweaty-backed among us. A solid audio system and a very straightforward infotainment/navigation setup enhance the feeling of niceness. Nearly useless though it may be, Kia’s selectable FlexSteer does make the Forte’s new owner feel nice. Mostly useless, yes, but it is there. The same can’t be said for the, ahem… Corolla.

Proximity sensors that deal with the locks but also fold in the mirrors as I depart and unfold as I arrive are very cool. Low-profile tires, P215-45Rs, on 17-inch wheels and Xenon headlights and the sunroof… and the leather interior, paddle shifters, dual-zone auto climate control, alloy pedals, and the backup camera all made this specific Forte feel nice.

You get the picture. The basic knowledge of these features will make a Forte owner feel good about his or her purchase. But that’s actually not what I’m talking about. When I say the Forte feels nice, when I bring up a comparison with luxury status, I’m genuinely talking about the way the new Forte feels when your fingers touch it. The equipment race can be won by any automaker willing to provide a long options list, a list that’s almost always completely ticked off when cars arrive from an automaker’s press office. Besides, that’s not even a fair comparison: the Forte has more stuff, more interior features, than many a so-called luxury car from just five or six years ago.

In spades, what the new Kia Forte has are high quality bits. Every car has these bits, but the Forte’s do stand out because of their feel.

Consider your normal routine. You pull the exterior door handle, a chrome piece that most automakers have wisely decided to solidify.

You fall in and close the properly-weighted door. It channels its handle’s solidity. Your left hand removes your cell phone from your pants pocket as your right hand effortlessly slides open the door to its compartment just ahead of the shifter.

Brake depressed, your right hand’s index finger prods the start button. (Just give me a key; I can get in and get going faster with a key.)

You adjust the two climate knobs. Ah, they’re a little bit knurled. The buttons in between the two knobs, the ones you use to select the modes, feel like the polar opposite of the snappy and brittle switches in a ’92 Mercury Topaz. Your right thumb squeezes the chrome knob on the shifter and slides it back through a pleasant amount of resistance. And now you’re easing out of the driveway.

From the audio controls above the climate centre to the steering wheel switches (too many for a wheel if you ask me, although they’re simple to use) and the sunroof controls and the power window pulls and the wheel-mounted stalks, the 2014 Kia Forte’s parts feel nice. Rooted. Sturdy. Dense.

The centre armrest has the right amount of cushion, as do the door-mounted rests. The dash top isn’t padded in fur or two inches of leather padding, but it has a few vertical lines that diverge from the norm and disrupt the Dodge Intrepidesque vastness. As in the Soul, the Forte’s steering wheel feels costly: smooth, but not so smooth as to be gripless. The touch screen never failed to respond to my inputs the way my iPhone does periodically. There is more available lumbar support than I require. Bless me. That’s a first.

Interior letdowns are few. It’s not very quiet. The vents are fine, but they don’t have the overarching sense of niceness present elsewhere up front. The cupholders in the centre console are too small. Why does the hazard flashers button take centre stage, and why does the red lighting need to be so oversaturated?

Nevertheless, my fingers believed the 2014 Forte’s interior was special. They perceived that the level of quality and craftsmanship was high. As the notion goes, if the parts you can touch are built this way, the parts you can’t touch must be, too.

What’s the catch? At least on these 17-inch wheels, the new Forte’s ride quality is poor. It’s not busy, but oceanside potholes send shivers through the structure, and through your teeth. This certainly shouldn’t allow for comparisons with premium brand cars, although too many of them ride harshly, as well.

Our test car’s low mileage – I was its first tester and there were fewer than 500 kilometres on the odo when it left GCBC Towers – precluded us from proper real world mileage testing. A broken-in 2014 Forte 2.0L isn’t going to average 13.2 litres per 100 kilometres (17.8 mpg) like ours did. But a Honda Civic is rated at 28 miles per gallon in the city, 17% higher than the Forte’s 24 mpg city rating. 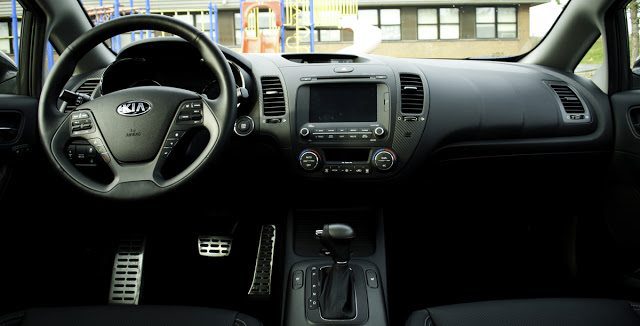 If you max out the Forte Eco’s efficiency, its 26/35 mpg EPA rating still doesn’t impress. And by doing so, you’re foregoing the higher-powered 2.0L. That 173-horsepower 2.0L works with the Forte’s interior to impress its driver in a way few compact sedans do. An interior built to a high standard with an engine that generates a greater amount of power than the majority of its rivals, by the very definition of the words “high” and “greater”, isn’t normal.

Dynamics are not class-leading. It’s agile enough, but the steering is too numb to properly place the Forte when you’re driving aggressively. Yes, it’s punchier than most when accelerating onto the highway, but the Forte does not act as a middleman between driver and road, and thus there is no connection formed between the driver and the car, not in the way a Mazda 3 driver would expect. The transmission’s shifts are meant to be masked rather than quick, and unless you ask for it via paddles or the lever, downshifts aren’t easy to come by.

Expectations for compact cars, especially Korean compact cars, are decidedly low. They shouldn’t be. It’s 2013. If, in a handful of ways, the 2014 Kia Forte SX could deceive an Audi A4 owner into believing they were in a more expensive car than their own, Kia has succeeded. Indeed, Kia has succeeded in causing us to leave behind our expectations and look to the future. It’s 2013, but the Forte’s interior made me think we’d skipped a generation of small cars, just as the Volkswagen Golf’s interior quality makes other small cars seem like they’re a generation behind.

Wise CEOs of major luxury auto brands must be realizing that tomorrow’s small, mainstream brand cars are staring them in the face more steadily than they expected, forcing them to further refine their cars, to add yet more sound deadening materials and more previously unthought-of features and more powertrain advancements and more alcantara.

Perhaps they refers mainly to the 2014 Kia Forte SX.