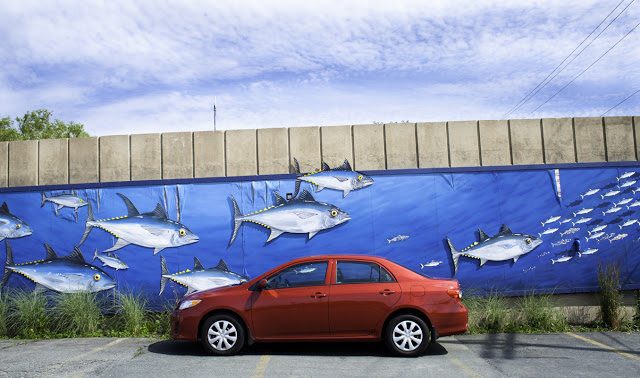 It doesn’t take long to develop a theory that could explain why Toyota is dropping 2013 Corollas on the driveways of car reviewers. From Autofocus to Wildsau to Driving, the outgoing Corolla has made the rounds only weeks before the all-new 2014 Corolla becomes widely stocked at Toyota dealers across Canada.

But the Corolla isn’t operating in a world of its own.

Honda introduced a new Civic right around the time Toyota last refreshed the Corolla. Since then, Honda has introduced another new Civic and thoroughly updated that car. We’ve seen new small sedans from Chevrolet, Dodge, Ford, Hyundai, Kia, Mazda, Nissan, Subaru, and Volkswagen. And yet, despite poor reviews from the automotive press and insults in GoodCarBadCar’s Bad 8, the Toyota Corolla continues to be one of the best-selling cars in North America.

Oh, sure, the counter-argument has more than enough prongs for you to formulate an argument. Competitors offer more power, more space, better fuel economy, more innovation, and less of a “Senior Citizens Only” image.

Presumably, the new 2014 Toyota Corolla will be a better car. Moreover, it’s not hard to believe that most, if not all, of the 2013 Corolla’s rivals are superior compact cars.

#8: I haven’t resisted the urge to complain about the Corolla CE before, but last week’s test car wasn’t actually a base Corolla. Nor is it one rung up from the base CE model. This car featured the Enhanced Convenience Package, which includes the features modern Canadian car buyers feel they need: air conditioning, power windows and mirrors and locks with keyless entry, Bluetooth, cruise control, heated seats, and bless their souls, four body-coloured door handles. 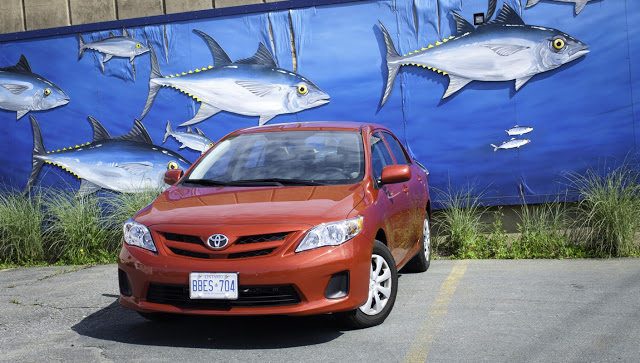 Those four last bits make a huge difference, allowing you to feel like you’re not walking up to an economy car from 1997. And the feature load makes sure you didn’t just spend $20,717 tax-in dollars on a depreciating “asset” that didn’t have power windows or power locks or cold air.

#7: Ride quality in the 2013 Corolla is far more soothing than what you’ll experience in too many of the Corollas competitors, cars which place to much of an emphasis on agility, yet don’t go far enough to really impress you with their handling ability.

Thing is, the Corolla’s ride quality is only “far more soothing” until the rear torsion beam hits the same bumps that the independent front suspension already struck. Then it’s only slightly better than the stiffs available elsewhere.

#6: What if you don’t want to control your heated seats by reaching out to a touchscreen you can’t see with sunglasses on in order to navigate your way through three menus? What if you don’t need a two-level interior with digital instrumentation?

What if you know how to press the radio’s seek button and don’t need to press a voice control button on the steering wheel, wait a moment, another moment, and then ask aloud for the radio to seek?

What then? You buy a 2013 Corolla. Simple interior layouts are increasingly rare. But the Corolla CE’s interior layout is most assuredly simple. To say the least.

#5: Compared with compact cars which travel nearly 40 miles on a gallon of gasoline on the highway and 30 in the city, the automatic Corolla’s 26/34 ratings are noteworthy for all the wrong reasons. During its week in GCBC’s safe keeping, however, a week which was spent almost exclusively in an urban environment, the 2013 Toyota Corolla consumed 7.2 litres per 100 kilometres, equal to 32.7 miles per gallon on the U.S. scale. Our Nissan Sentra tester, possessor of much higher EPA ratings, did 28.3 mpg back in May.

#4: Let’s say you’re about to rob a bank on Bay Street. You need a getaway car. The obvious choice, a yellow Lamborghini Aventador, while capable of hitting 349 km/h once you reach the 401, is dangerously conspicuous. Corollas, on the other hand, couldn’t be more anonymously-designed, particularly when they’re painted in Classic Silver. This Barcelona Red is just too full of life to pull off the invisible getaway car trick.

#3: Toyota doesn’t make you pay extra for any safety feature. ABS, EBD, stability control, traction control, brake assist, and abundant airbags are all standard, and that’s sure to impress customers who’ve grown accustomed to paying automakers extra, even after those automakers tout their safety records. But will those same customers check the spec chart closely enough to see that the anti-lock brakes work with rear drums? Brake feel is dreadful, and there’s a real lack of bite just when you expected to come to a full and complete stop. 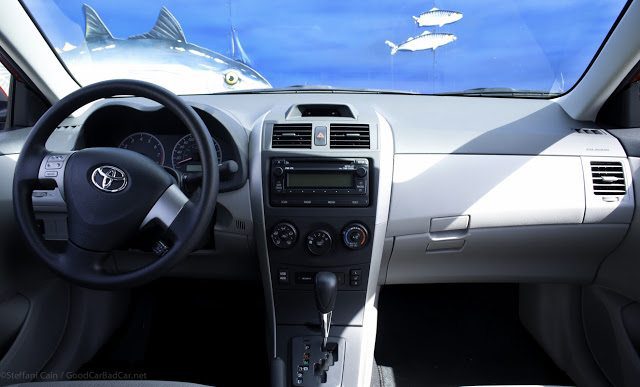 #2: Toyota Canada asks that you pay just $1000 for an automatic transmission. Honda and Mazda demand $1200 for the privilege of equipping their Civics and 3s with 5-speed and 6-speed automatics; Hyundai wants $1250 for the Elantra’s 6-speed automatic. Unfortunately, the Corolla’s inexpensive automatic is a power-sapping 4-speed. Power. Sapping.

#1: I’m not certain that any of the Canadians buying Corollas these days are buying them because of the seven aforementioned reasons. People buy Toyota Corollas because Toyota Corollas are Toyota Corollas. The nameplate’s reputation for quality, reliability, and durability is peerless.

Peerless, I tell you. Interior buttons and switches are rugged, unbreakable even in a two-year-old’s hands. Seat materials are so horrendously fuzzy you just know they’ll last for decades without deteriorating, because they’ve already deteriorated. Yes, the engine isn’t peppy, but it’s smooth and quiet and all-around refined. Save for rear doors that close with a clink, the structure is sound, stout, even stiff.

I firmly believe there are far more exciting and alluring compact cars on the market today. There are better equipped cars at the price, cars that offer a greater value quotient, more of just about everything.

Yet, loathe though I am to admit it, I respect the choice thousands of Corolla buyers have made.

But maybe they can’t be trusted quite as much.