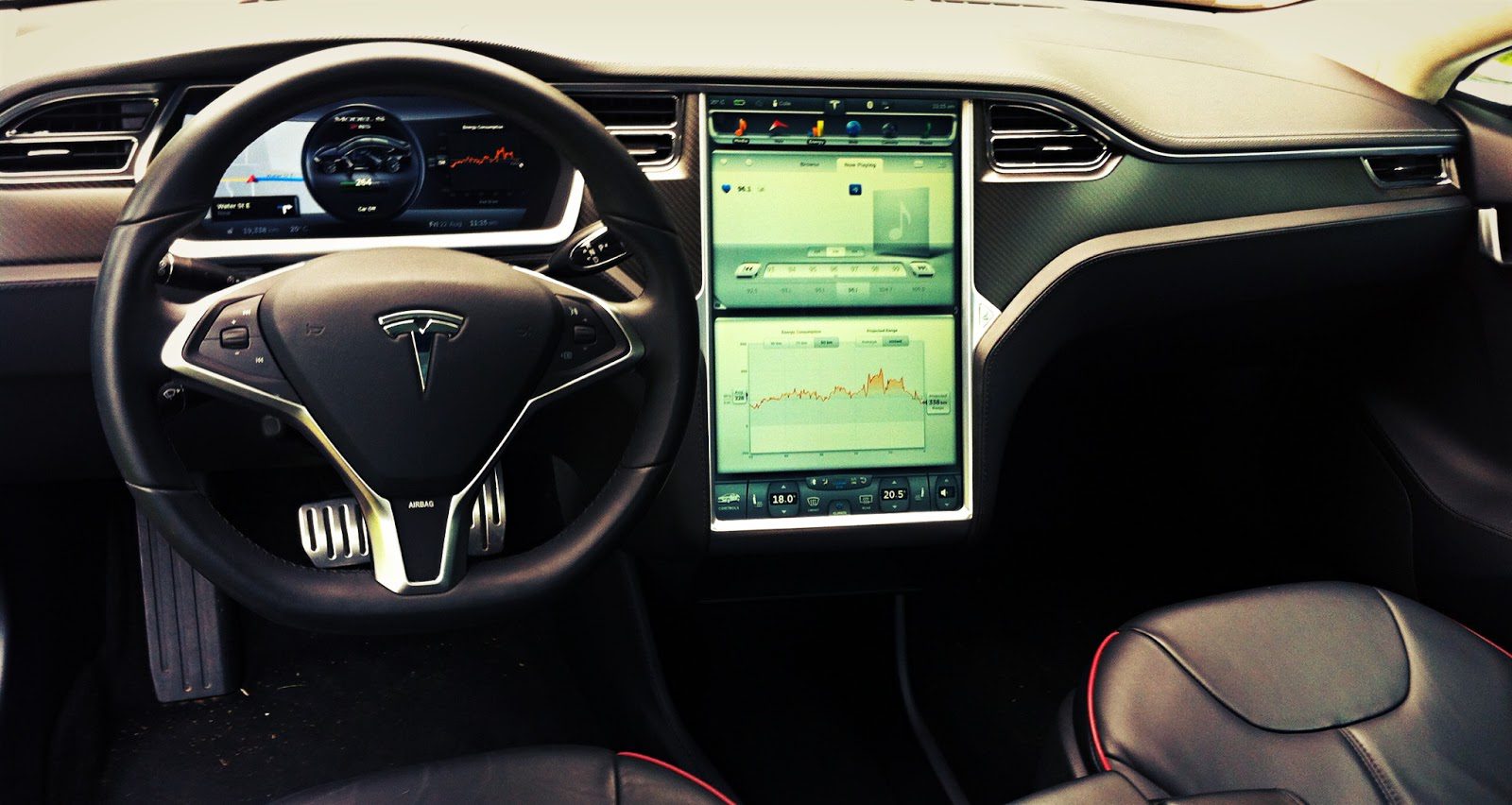 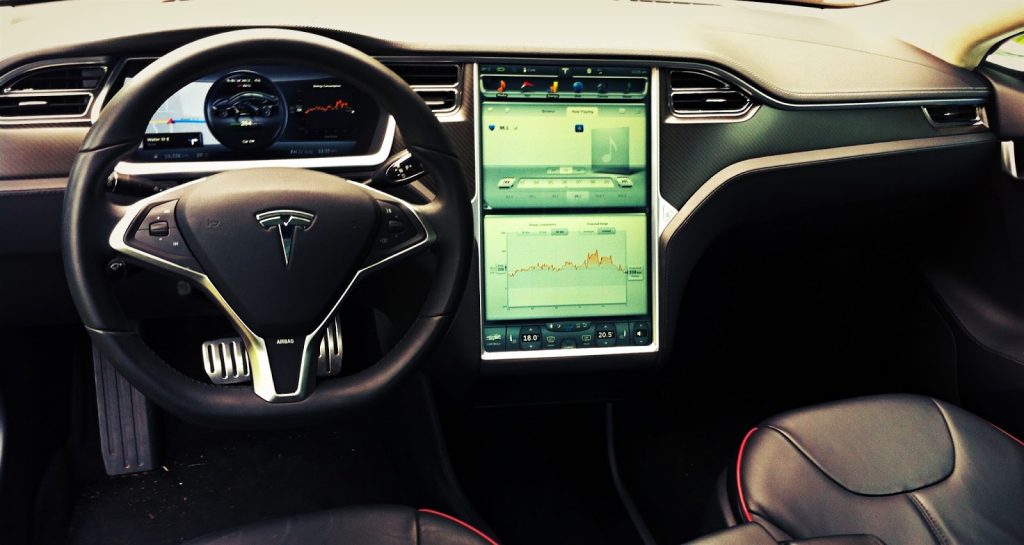 It’s difficult for any test drive of a Tesla Model S to result in a review that doesn’t become an analysis of the company’s business model, an attempt to justify the cost of the car because of the fuel savings, or a simulated comparison test with a Mercedes-Benz S-Class.

But what if the Tesla was just a car made by any other conventional automaker? What if we stopped thinking of its electric propulsion system as a sacrifice, or ignored its unique means of generating thrust? And what if we recognized that, because of the company’s desire to operate unconventionally and because it’s plugged in and not fuelled up, no such comparison test can be validated?

My friend, who we’ll call Rob, recently acquired this black Model S P85. He isn’t a wealthy environmentalist; he is a true gearhead. Last time I saw him he was driving a previous-gen Nissan Pathfinder, having for years shuffled through performance cars before discovering married life with children. He wasn’t cross-shopping the Model S with an S-Class or a Panamera or a Jaguar XJ or really anything at all. He wanted this car, and not just with a little bit of desire.

Thankfully, he also wanted me to drive it.

Before even acquiring the all-electric Tesla, Rob had a few advantages not available to residents of, oh, I don’t know, Rawlins, Wyoming. Rob lives in Canada’s smallest province, Prince Edward Island, a bona fide shrinking sandbar in the Northumberland Strait. 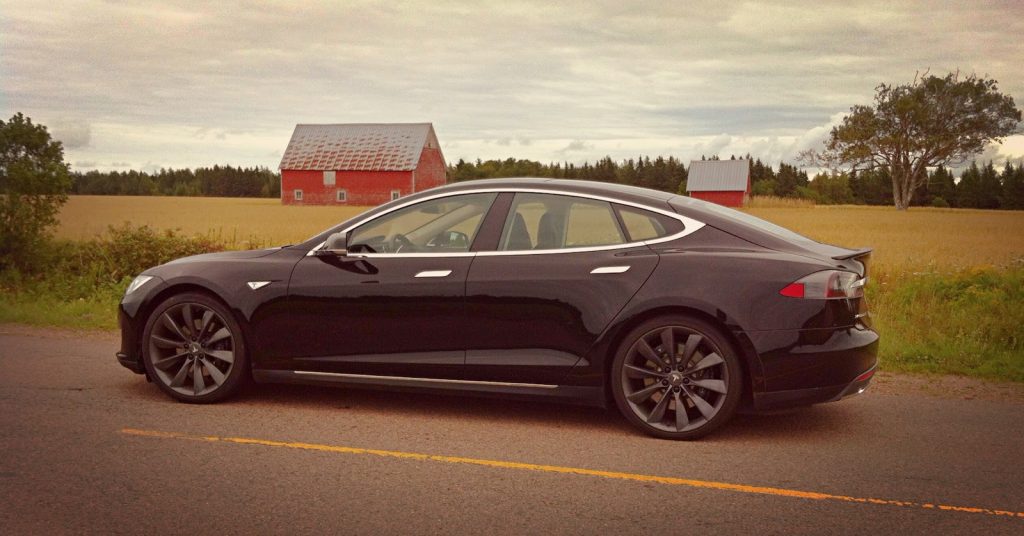 Rob could drive his Model S tip to tip, North Cape to East Point, and still have enough range to get back to his home in the western part of the island outside the small city of Summerside. And yes, Summerside is absolutely littered with electric car chargers. There are eight within a five-kilometre drive of Rob’s business, in part because of the government’s attempts to show what all their wind turbines can do. None of the chargers are in use as I write this.

So Rob’s range, especially if he decides not to cross the Confederation Bridge to the mainland, is as much (if not more) limited by the size of his island as it is the capacity of his Tesla’s battery.

Not that the top of the line Model S is particularly range-limited, but once range anxiety is removed from the equation, a Tesla owner is simply left with the benefits of low energy costs and always available torque. After a brief tutorial from Rob – the car is on because you got in it, align your personal settings at the top of the screen where it says Rob, open the glass roof by virtually sliding it open here, check Tesla’s share price via the free-for-life web browser – he encouraged me to suspend the speech of my passengers with firm prods of the accelerator, such is the capability of all that right now torque.

Rob headed back into work; I left Summerside for greener pastures and emptier roads. Veering away from an awkwardly-designed roundabout between Summerside and Kensington with the right pedal set to loud and the Model S not really leaning at all through a fast, getting faster, really fast, almost too fast right-hand sweeper, my mother-in-law was in fact silenced. My father-in-law, who’s ongoing root canal left him half-high on Tylenol 3, may have clenched his teeth tight enough to need an extra visit to the dentist. These folks are used to passenger rides in fast cars, and I’m accustomed to driving them.

But electric torque is different.

The twin-turbocharged Cadillac CTS V Sport reviewed here recently weighs less than the Tesla and produces similar power. Yet no matter what we say about the removal of turbo lag in modern cars, and indeed no matter how we laud the best naturally-aspirated V8s for their instantaneous throttle response, they just don’t feel like this. They may also not lose five kilometres of range over the span of a 600-metre acceleration run.

Up to cruising altitude, Tesla has effectively hushed the aggressive 21-inch 245/35ZR Michelin Pilot Sports. Wind noise, particularly around the driver’s side A-pillar, is another matter. It’s likely that a conventional car may overwhelm that swshh with a vibrating V8; the Tesla has no such powerplant to drown out the sound of the wind. Nevertheless, the future of silent propulsion will necessitate an even greater focus on noise and harshness, if not vibration, of which there is none.

The P85’s straight-line performance (416 horsepower, 443 lb-ft of torque, quarter mile in the low 12s) doesn’t stop impressing, especially on an island full of two-lane roads with tourists who need overtaking, but in daily driving I have to believe that the car’s balance and rough-road composure will provide greater satisfaction. 48/52 weight distribution, particularly when that weight is settled way down low with a centre of gravity of just 17.5 inches, makes for the kind of tossable handling you’d never expect to find in a car that weighs around 4700 pounds. Ride quality is certainly no worse than what you’d expect in a five-passenger car that costs this much, perhaps better given its roadholding skills. 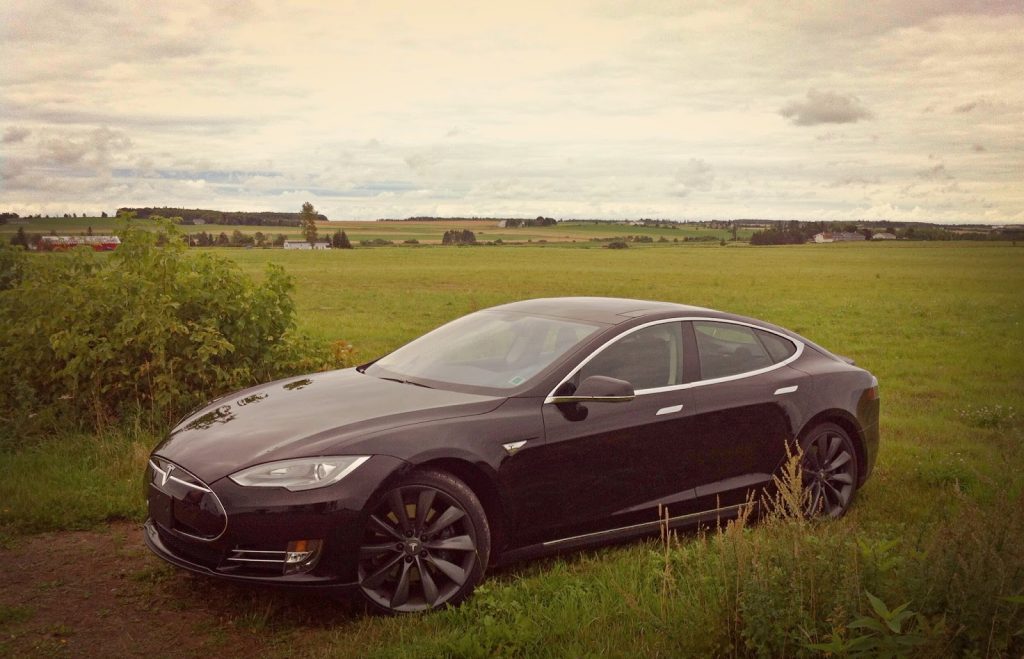 The Tesla’s accurate and realistic steering is best left in the Standard setting, as Sport’s hefty weight is better left reserved for twisty-road hustling and Comfort is unnecessarily light, though not unusable. If there is one dynamic complaint, it’s a small one concerning the car’s knack for remaining on an even keel, as there’s not much to signal that the Tesla’s high limits are approaching. A small measure of body roll would be enough for the chassis to effectively communicate its current status.

There are certainly no complaints with the brakes, which I hardly ever used. Somewhat more normal braking with less regen is available by way of a simple settings change, but leaving the brakes in Tesla’s standard mode, and thus backing off the throttle, is distinctly more pleasant in town. It also provides a more performance-like sensation when the car’s being driven with gusto. 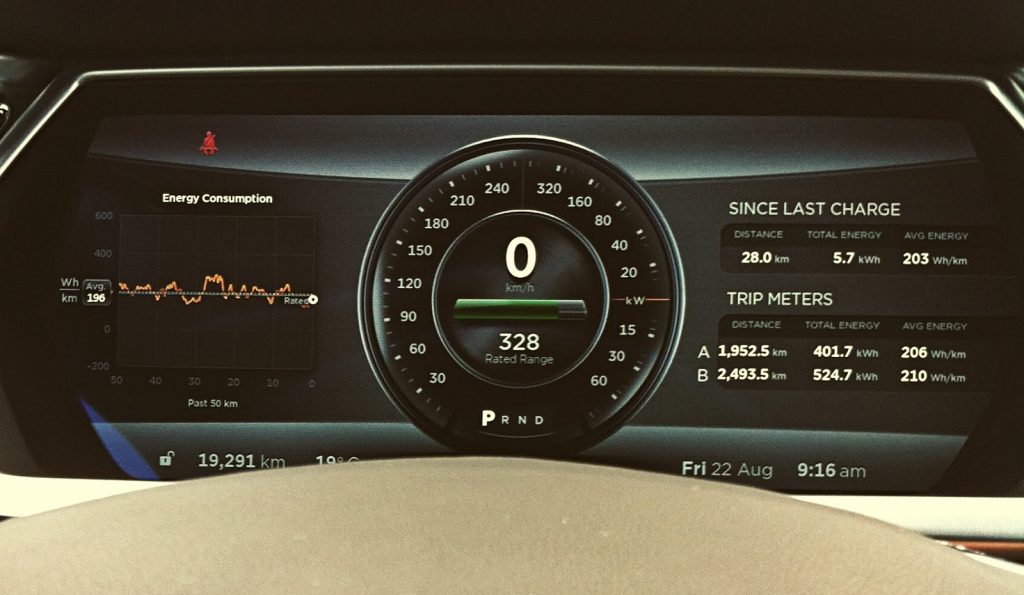 Inside, the Tesla Model S is vast. Rob’s car didn’t have the optional third row, so the cargo area (745 litres) appeared all the more expansive. Don’t forget, there’s another 150 litres of space under the front hood, space which Rob uses as a change table for his toddler. Rear seat leg room is plentiful, but the floor does feel much too high back there. Up front, I found the driver’s seat needs more side bolstering, but the seat is hugely adjustable and sufficiently lengthy for those of us who are long of thigh. The large minivan-like area between the front seats is more than a little useful but some extra dividing options wouldn’t go amiss. I was no fan of the Model S’s spindly cruise control lever, and the seatbelt buckles are far from premium in a car which emphasizes high end materials, as exemplified by the Alcantara headliner.

The interior, however, centres around the vertically-mounted 17-inch screen. I found myself grateful for the simplicity of the controls. After all, I wasn’t going to have a week with Rob’s Tesla as I typically do with manufacturer-supplied press cars. The ease with which I shuffled between menus, read TTAC readers’ disagreeing comments on last Friday’s Impala story, and operated the always-visible climate controls speaks to the lack of complexity in the system. Yet I was more fond of the speed with which the screen operated. All too often, current vehicle-installed infotainment systems possess none of a modern computer’s speed. The Tesla’s device never required a wait. The big screen’s one letdown? Rob told me a system reset would be required if we left the browser for an extended period on any page other than Tesla’s own website, as other websites tend to cause the screen to freeze.

Speaking of freezing, Tesla’s fortunately going to take care of Rob’s leaking cargo area before winter temperatures set in by flying in a technician to solve the problem. This is symptomatic of Rob’s overall service experience. I asked him whether he put up with the car’s (admittedly few) faults just because he loves the car so much, noting that a flooded trunk in a new Honda Civic would have consumers up in arms. “No,” he said, “it’s the service experience.” If problems are resolved this efficiently, the problems which should seem substantial become trivial, even forgotten. 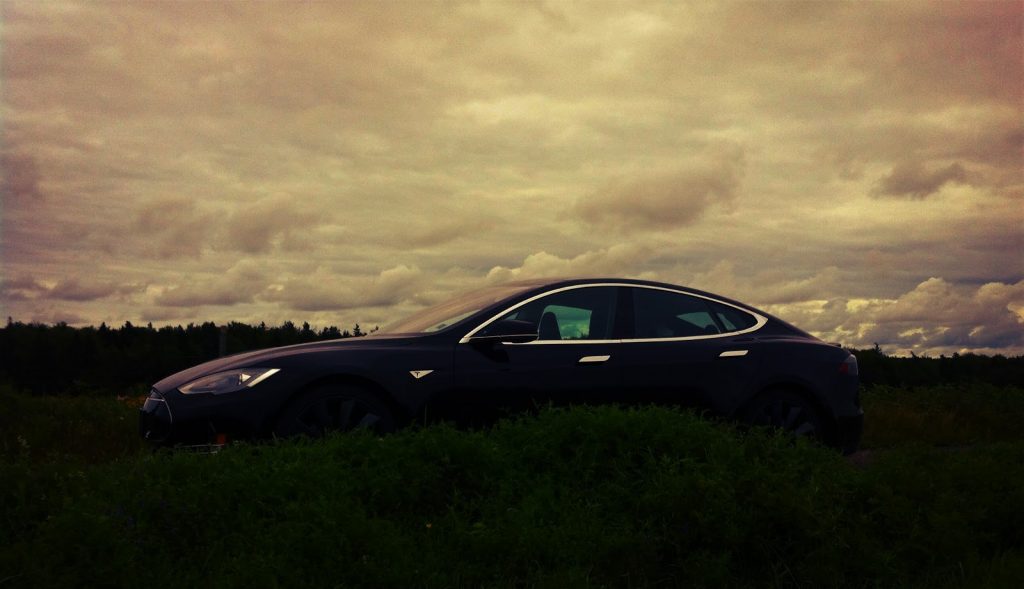 Priced from $104,470 and fully-optioned at $140,370, the Tesla Model S P85 is not the electric car for the masses. Tesla’s upcoming crossover won’t be either. Yet if Tesla can continue to prioritize performance and market the best-looking cars, they’ll be special devices at any price point and in any category.

To a certain extent, the Model S transcends “car” to function in a broader consumer marketplace as the next best thing. After an extended test drive in Rob’s Model S, I’d argue that the Model S transcends “car” because it’s better than other cars, regardless of its place in popular culture alongside advancements like the iPhone, Google Streetview, and gourmet burgers.