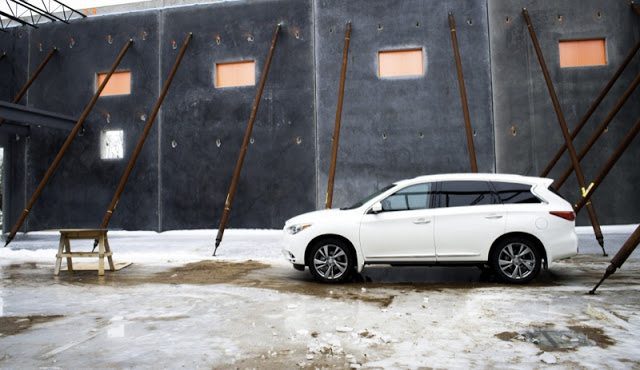 This looks familiar. GoodCarBadCar had a brief opportunity to drive an Infiniti JX35 back in September. The review was mostly positive, and I put the JX through its paces as much as one could in a single afternoon. Nevertheless, Infiniti Canada was generous enough to send a more heavily equipped JX35 to the GCBC Towers driveway, a JX loaded to the gills with warning beeps and monitorial lights.

Over the span of a week with the Infiniti JX35, a vehicle we’ll eventually know as the Infiniti QX60, I grew to enjoy its presence a great deal more than on that initial drive in September. I still found very little that would justify the lodging of formal complaints. However, we did spend an inordinate amount of time exploring newfangled safety systems and allowing others the opportunity to witness them, as well. For the most part, this review concentrates on a few of those key features. It also mentions the Infiniti’s 3.7L 3.5L V6 and its practical solutions to everyday problems.

HISTORY LESSON
Back in the late 90s, the driver of a new Pontiac Montana told me that his minivan’s traction control system was interfering with his fun. True story. There were two possible conclusions which could be… concluded. First, his ten-tenths driving style, the kind that would require his Montana to alert its traction control system, was probably not appropriate for the school run through the suburbs. And second, GM’s traction control technology had perhaps not reached its zenith.

During the same period, an RCMP officer complained to me about his cruiser’s anti-lock braking system. It pulsates, he said, and doesn’t respond to pumping.

From this point on, I’ve listened to a debate about the steady creep of high-falutin’ safety systems in our cars. The majority of drivers don’t even know about the traction control systems or the electronic stability control programs in their cars, so unobtrusive are they.

ABS? People now know to jam on the brakes, and hold. Drivers and passengers wear their seatbelts. Kids remain in booster seats almost until they’re legally allowed to consume alcohol. We trust our reverse parking sensors to steadily beep so we know we’re about to bowl over Sally’s tricycle.

Automakers are always attempting to improve, or at least they should be. Engine capacity shrinks while horsepower increases and fuel consumption decreases. Exterior dimensions grow while curb weights decline. And safety features that might have originated at the Nanny & Governess School trickle down from $100,000 German sedans to $50,000 Japanese crossovers. 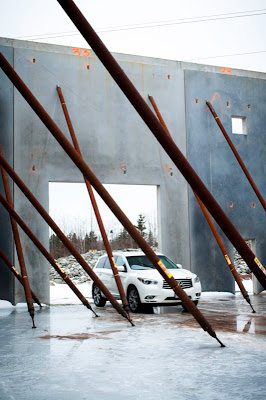 Many automobile enthusiasts feel that the rapid incorporation of these high tech safety features into mainstream cars is a frightening trend. TVR, that great bastion of automotive enthusiasm, believed a heavy, long-travel throttle pedal was the best kind of traction control. Lotus fans, legions of whom have never even seen a Lotus, were aghast when the Elise gained a couple hundred pounds of airbags and ABS.

But how frightening can it be? How alarming would it be if American households had fewer guns? How horrified would you be if you knew all the cars surrounding you on snow-covered roads wore winter tires, as they do in Quebec? Would it be so terrifying to know that a rogue state no longer possessed chemical weapons? That Russell Williams and Paul Bernardo were locked away for good? That HIV had been eradicated along with smallpox?

How can safety be scary? Get over yourself – it’s not scary; it can’t be. But it can be intrusive. And if ever there was going to be an intrusive onslaught of safety features, the bombardment would occur in this Infiniti JX35.

BSW
Sounds like: a useless university degree
In reality: Blind Spot Warning
The little light near the sideview mirror isn’t visible unless you’re looking for it. Indeed, it doesn’t glow (dimly) unless a lane change would result in an impact with a vehicle that currently resides, you guessed it, in your blind spot. Your shoulder check instincts and your compulsion to check mirrors won’t disappear. But while glancing over you’ll notice that the little light is helpfully shining.

Visibility is really quite good in the Infiniti JX. But just because there are many cars which would be better served with BSW doesn’t mean it’s not useful here.

LDW
Sounds like: a women’s only book club
In reality: Lane Departure Warning / Lane Departure Prevention
LDW doesn’t always work. It’s never wrong. If it told me I was moving into another lane, that’s because I was. And the LDP is definitely gentle, virtually unnoticeable. But don’t wholeheartledly trust the JX35’s LDW. Where roads curve or salt wreaks havoc, it sometimes struggles to find the lane lines it requires to do its job. But intrusive? Not at all.

Stay in your lane, use your signal lights before moving out of your lane, and you’ll never even hear the relatively muted beep.

FCW
Sounds like: the federal commission on Watergate
In reality: Forward Collision Warning
Infiniti says FCW generates an audible and visual alert prior to an “imminent collision.” Very imminent. If it beeps, you’re going to hit something, and you’re going to hit it very soon. So start paying attention.

AVM
Sounds like: a successful commercial construction company
In reality: Around View Monitor
I’ve taken people for drives who said they wouldn’t know where to look, the in-car screen or out the back window. Others said it was trippy, which the Urban Dictionary defines as, “reminiscent of something one would experience on a trip on a psychedelic substance.” So much more than a simple skewed image of what’s below or around your rear bumper, the Infiniti JX35’s AVM displays wheel angle and snowbank proximity and the whole vehicle’s dimensions as they compare to your surroundings. At low speed, any attempt to back up into a stationary or moving object will be suspended, temporarily, as the JX attempts to once again tell you to freaking pay attention.

Yes, it will stop you automatically. But the real assistance provided by the around view monitor isn’t necessarily during the reversing maneuver; it’s before. Have a look at the screen, see the things you might hit that you can’t see by looking in your mirrors and out the back window, then proceed as normal. Do not try and look out the back window and at the in-car screen at the same time. You will hurt yourself. 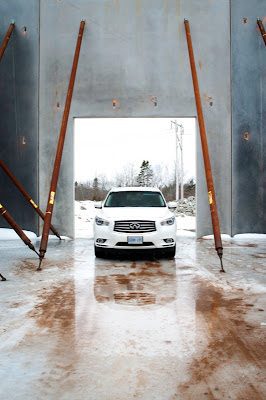 AHATOS
Sounds like: really good Greek food
In reality: And how about the other stuff?
The JX isn’t slow, but it really ought to be fitted with Infiniti’s 3.7L V6, an engine which generates 328 horsepower, 63 more ponies than the JX’s 3.5L produces. This is not a lightweight vehicle. At 4419 pounds, it’s 557 pounds heavier than a Hyundai Santa Fe 2.0T, and the JX only has the power of one extra horse. So yes, regular cars will pull away from a JX at traffic lights, especially if the JX is in Eco mode and the throttle pedal is downright TVResque. The JX’s heft can also be felt when cornering aggressively, but who are you, that Montana driver I talked about earlier? Ease off a bit and enjoy the ride. It’s cushy but not at all floaty.

The dynamic balance Infiniti struck is quite nice, really. Decent steering mates with superior ride quality and a composed quality on twisty roads. It’s not a G37 Coupe. Don’t drive it like one and you won’t be disappointed.

Access to the snug third row (which is expandable by sliding the second row forward) is better than in most three-row crossovers, but it’s not an easy process for adults. Infiniti is, however, rightly proud of the fact that the second row’s sliding/tipping motion can be done with a child seat in place. Hooks abound in the cargo area, there’s a hidden well beneath the cargo floor, and the auto-open tailgate makes a Costco run really easy.

During its week at GCBC, the JX35 managed only 13.5 L/100km – equal to 17.4 miles per U.S. gallon – despite its EPA city/highway ratings of 18/23. Much of the driving was done in very cold conditions on snow-covered roads, so there was no chance for maximum economy.

Care to pick nits? The wood trim up front is too glossy. The stereo controls are set too low. Too much of the windshield’s upper-right corner goes unwiped. The steering wheel has too many buttons.

But the steering wheel was heated. In a few months, I’d like to take advantage of the JX’s cooled seats. (As I write this, the temperature is -13°C; the windchill is -22°C.) At this rapid rate of safety development, by the time beach season begins, Infiniti may have figured out a way to alert drivers to objects falling from above. Also, zombies coming up from manholes. Zombies are all the rage these days. And Infiniti wants to protect us against all eventualities.

The marketing plan will write itself.

Underbody sensors protect QX60 drivers from the monstrous creatures of the underworld.

Maybe it will use cameras instead of sensors. ZCWM will be a great leap forward by Infiniti’s R&D team. Zombie Collision Warning Monitor. It’s certainly more interesting than a Pontiac’s traction control or a Crown Vic’s ABS.