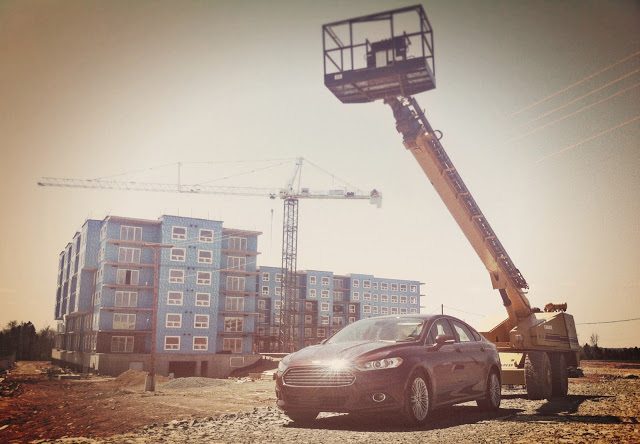 The Fusion’s dimensions are more keenly felt, however, when you analyze the fat content. Ford says that the all-wheel-drive system on GCBC’s tester adds 155 pounds, and that pushes curb weight up to almost 3700 pounds. Camrys top out under 3400 pounds. Accords range from 3192 to 3559 pounds.

This is weight that’s felt in the Fusion, in the doors that kids might not be able to close, in the 240 horsepower that feels like 210, and in the brutal 18 mpg fuel economy performance. 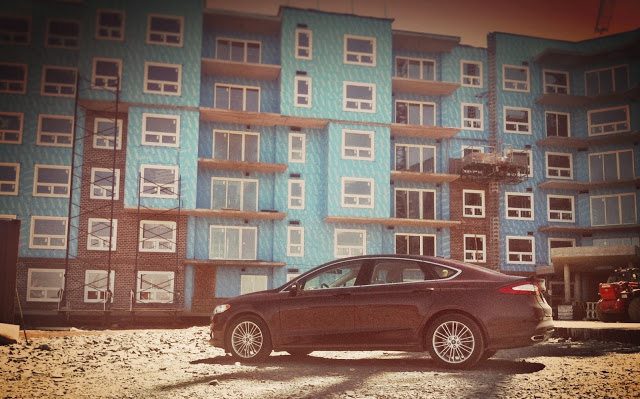 But the story of Ford’s Fusion, the best-selling midsize car in Canada this year, is not enveloped by one conversation about its bulk. Chiefly because of the 2013 Fusion’s ability to remain composed on twisty backroads, its excessive chunkiness didn’t bother me the way I expected it would. In fact, aside from the intellectual difficulty I have with heavy cars, it hardly bothered me at all.

We don’t need to wonder what the Fusion could be with a shedding of two or three hundred pounds. The 2014 Mazda 6 GoodCarBadCar tested a few weeks ago answers that question, at least on the handling front. It would lack all-wheel-drive, something Ford’s rivals have deemed unnecessary. It would consume less fuel, like the Mazda did. And it would feel quicker.

Fitted with the 2.0L EcoBoost four-cylinder, the Fusion generates 270 lb-ft of torque. This powerplant makes a surprisingly pleasing growl.

Better yet, once underway, as revs rise and the speedometer’s needle has moved ’round a ways, the 2.0L turbo finds its groove and provides the kind of passing power – in excess – that we’ve come to expect from V6-engined midsize cars.

Indeed, better yet, when speeds rise and many a floaty midsize/large car would have you wondering if you’re really in control of the situation, the Fusion’s accurate steering and firm brake pedal increase your confidence.

So the Fusion is too heavy, and it would be wonderful if it wasn’t, but its weight doesn’t negatively impact the experience to the degree enthusiasts would lead themselves to believe.

Does this mean the car is perfect? No, of course not. There are niggling issues: some are exceptionally minor and will likely be resolved in the near future, others can’t be dealt with outside of a full redesign.

Let’s start with the latter. The new, second-gen Fusion’s trunk is massive, but the opening is narrow and the actual trunk lid doesn’t rise out of the way. My wife and sometimes-GCBC-photographer isn’t known for her stature, but even she managed to crack her noggin on the knobs which hang from the Fusion’s low-hanging trunk lid when she was removing groceries. In part, this is a testament to the Fusion’s rakish styling. But it does limit cargo-carrying flexibility.

Entry into the rear seat is also made more difficult by the Fusion’s sloping roofline, and space in the back isn’t particularly plentiful. Perhaps we can even blame the shape of the car for excessive wind noise around the A-pillars. 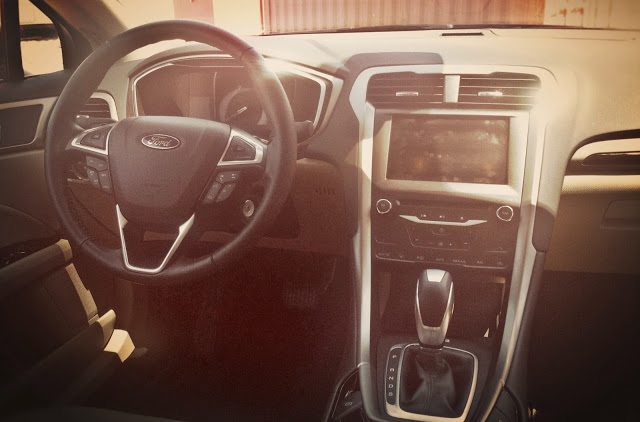 If you want your car to look this good, prepare to make a couple sacrifices.

If you want your car to be this technologically capable, prepare to be frustrated, if only every now and then. My experience with TouchingFords was previously overwhelmingly positive. In the C-Max Hybrid I drove back in the winter, Sync and I got along well. In the Fusion, my request to switch the satellite radio from Electric Area to 90s on 9 was once met with confirmation… and then, nothing. Another time, switching off the climate controls produced full power from the upper vents that blow toward my face, despite the fact that the control screen also believed the HVAC system was off. Steering wheel volume controls periodically declined to respond. Flush “buttons” on the centre control panel typically refused inputs from my brother and I, especially when we wanted the heated seats to heat, but accepted input from others without hesitation. 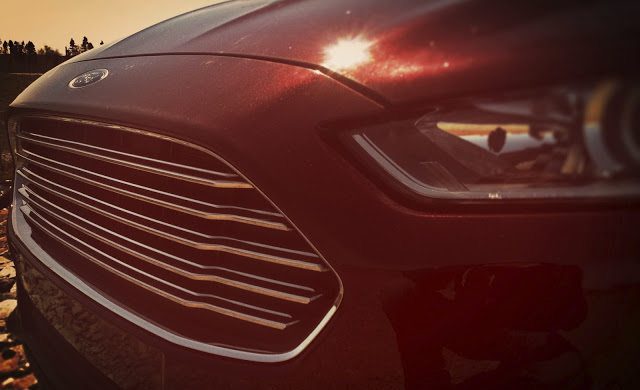 Hesitation? That’s something you’ll encounter with MyFordFondle, not to the extent that you’ll be bothered when everything is working smoothly, but the delays when switching from screen to screen or when simply completing a task can be hugely irritating when the system becomes confused. Making matters worse, the screen is canted rearward to the extent that it’s almost laying on its back underneath the windshield. On a sunny day, therefore, the screen can be very difficult to see.

Why is it that, even with the head-cracking trunk lid and mediocre rear seat and tech snafus, this high-end 2013 Ford Fusion still managed to seduce me?

Well, look at it. It’s not a dull Camry, nor is it a merely classy Altima. It’s not a clean-lined Accord, nor is at an unfortunate Avenger. The new Fusion’s Aston Martin-inspired grille will divide opinions, but if you like the overall styling even a little bit, you’ll end up liking it a lot. The 2013 Fusion’s design only grew on me during the week-long loan from Ford Canada. Its aggressive front end and impressive profile are the foundation on which Ford added integrated exhaust outlets, a beautifully chrome-outlined greenhouse, slightly swollen fenders, and a lip above the taillights that curves in all the right places.

There’s much more to the Fusion’s appeal than its design. This is undeniably a big American car, but it feels like a big German car. Steering, throttle response, shift quality, and responses which improve when the Fusion is under pressure all feel much more autobahn than interstate.

Perhaps best of all, the Fusion’s ride quality – its wheelbase is nearly identical to that of the massive Taurus – puts the Mazda 6 to shame. Together with terrific front seats and decent visibility, that class-defining ability to isolate occupants from everything a rough road throws at the suspension while maintaining an even-keeled attitude makes a Fusion owner feel very, very comfortable.