2013 Ford C-Max Hybrid SEL Review – Pleasant Even If It Wasn’t Efficient, But It Was

Fuel costs at GCBC last week totalled $14.82. Does that sound costly? Regular gasoline is priced at $1.37/litre here in Eastern Passage, Nova Scotia. That works out to about $5/gallon for U.S. readers.

Or does it sound like a week of driving on the cheap? The Ford C-Max Hybrid SEL I was driving completed a couple hundred kilometres at a cost of just seven cents per. 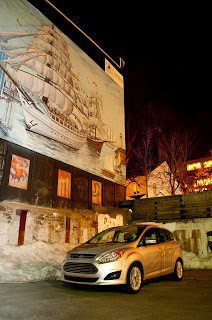 The aura of hybridized efficiency severely skews the way this review of the C-Max should be written, just as the knowledge of disappointing C-Max fuel economy has taken over the conversation in the countless other reviews. Generally, auto writers have not found the C-Max to be as efficient as Ford says it is. And when the car says “hybrid”, we don’t want to be disappointed by its fuel economy, of all things.

In this GoodCarBadCar review, however, we don’t want to talk about pocketbook issues, at least not exclusively. The C-Max is too good to be demeaned into an is-it-worth-it argument, as though this car is nothing more than a high-tech Hyundai Elantra GT alternative or a simple Detroit rival for the Toyota Prius. Did my 2013 Ford C-Max Hybrid SEL tester consume only 5 litres/100km? Equal to an EPA-matching 47 miles per gallon? With one 57-kilometre drive ringing in at 67 mpg? (And another 42km trip at just 31 mpg?)

Yes. The C-Max which Ford Canada sent to GCBC last week did all those things. It also proved to be distinctly European in feel, immensely roomy for passengers of all sizes, and capable of inspiring me to take the long way home.

To be honest, I take the long way home all the time. I live one block off a meandering oceanside road, a few kilometres from its terminus, which is where it would fall away into the Atlantic if not for a 90-degree left-hander that has just enough incline to challenge cars at legal speeds. I drive down this aptly-named Shore Road nearly every day. But I don’t always do it because of the car I’m in – I drive to the point because the views along the road, and at the end of the road, are even better than the view I have out my upstairs window. 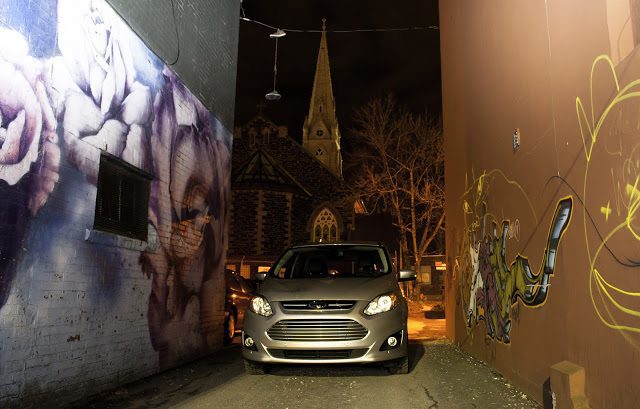 I like to drive, I like the ocean, and I like drives along the ocean. So if a reincarnated Daewoo press office sent me a 1999 Nubira for the week, I’d probably drive the Nubira out to Hartlen Point every day. And I would wish that I had chosen to walk instead.

The Ford C-Max isn’t sporty, not in the sense that it “handles like its on rails” or “accelerates like it’s been shot out of a cannon.” The C-Max doesn’t shift quickly, because, well, it doesn’t shift. Tall Ford hatchbacks don’t look like V8-engined Mustangs, either.

Driven at sane speeds, a notch or three or seven above the limit, the C-Max is surprisingly communicative and wonderfully rigid. Don’t mistake rigid for wooden. The chassis tolerates far more than the majority of cars I’ve driven, doing so with a nearly complete muting of wheel thunk. The C-Max’s structure is so sound, so of-a-piece, that Ford has clearly been able to ask the suspension to be extra absorbent. At the same time, this rigid structure rather apparently permitted the development team to extend the C-Max’s limits knowing full well that passengers won’t be unduly jostled. We’re not talking about an extraordinary extension of limits, nothing Focus ST-like. Just a bit, just enough that owners will feel confident pushing the C-Max in a way no Prius has ever been safely pushed. Anywhere. In history.

The C-Max’s on-road dynamics take over as the character trait with which you will understand the car. An efficient hybrid it may be. Loaded with backup cameras and voice recognition and MyFordCaress and a tailgate that responds to foot waving it most definitely is. Comfortable strolling through the suburbs on the school run it will continue to be. But to never drive the 188-horsepower Ford C-Max down a proper oceanside road with an extra dose of haste is to miss out on qualities that are unaccounted for in far too many new cars. 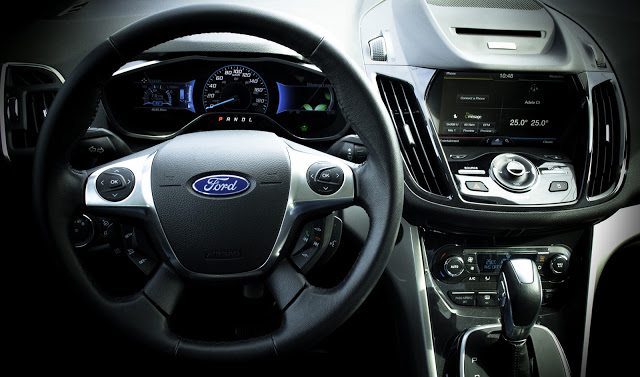 It’s easy to regard hybrid hatchbacks, the kind designed to compete with the Toyota Prius, as transportation devices. In fact, most midsize sedans and small crossovers are just the same. They are driven by humans, and they can go quickly, and they can handle. They may, in some cases, go faster and grip harder than the C-Max. But they don’t want to.

The beauty in Ford’s C-Max arrangement is that the driver who doesn’t care for its little dose of driving pleasure, the driver who sincerely wants a transportation appliance, can have one. The C-Max has real steering. It isn’t full of feel, but it’s real, like something out of a car, not a gaming console. The C-Max is shockingly composed when the driver has given ‘er the proverbial beans. Yet the owner who prefers isolation will gladly be given isolation.

It’s quiet. The seats are terrific and wonderfully adjustable. Passenger footwell space is utterly massive. Rearward passengers are seated in an upright fashion, giving them a great view and, more importantly, space for legs. Cargo capacity isn’t up to the level I’d expect in a car of this size – not much better than a Focus hatch – and the load floor is too high. Fold the seats, however, and the C-Max is vast, like all tall hatchbacks.

TouchMyFord never did anything but work as it should, albeit slowly. I took the time on night one to learn the desired voice commands, something you might not be able to do on a short test drive, but it pays off.

Ford’s rear camera is wide-angled with useful directional lines. The foot-waving tailgate only worked about 30% of the time, which was annoying (as it’s part of a pricey package) and embarrassing.

You try waving your foot under the trunk of your car for three or four minutes and see how many neighbours are looking out their windows at you. Fool.

Many high-quality materials and knobs seemed to have been paid for by pinching pennies on the remaining pieces. Terrific panel vent openers are cancelled out by tinny door handles. Nicely executed instrument panel buttons are let down by alumi-like plastic that becomes filthy in a hurry. Climate controls, which you might not use much once you memorize a few voice commands, are tucked away behind the shifter. Cycling through control screens in the gauge cluster is not terribly intuitive.

These complaints are far from deal breakers, however, especially when one considers that Ford has married efficiency with enjoyment. The C-Max’s hefty 3607-lb curb weight doesn’t hinder driving enjoyment, nor does the knowledge that you’re driving something that looks quite a bit like a mini-minivan with an Aston Martin grille and a silly little 90s subcompactesque grille above it. Personally, the knowledge of potentially superior fuel economy in a Prius wouldn’t ruin my fun, either. Only the thought of a conceivably less costly Volkswagen Golf TDI could do that. 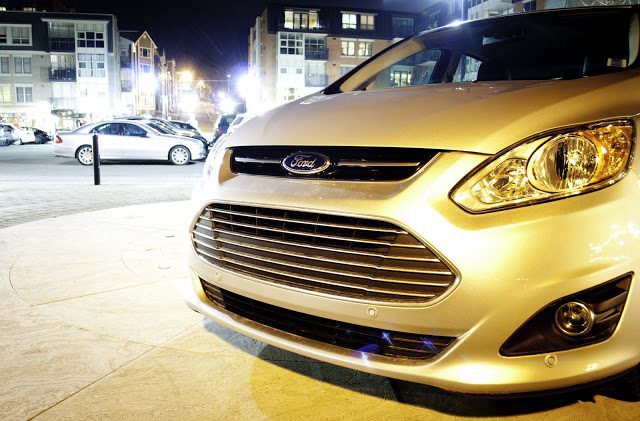 The C-Max can be equipped much differently than the one I drove. With everything but a panoramic sunroof, the 2013 Hybrid SEL at $32,699 (before delivery) is a smidge dear. Sacrificing leather and the self-parking system (which never fails, and never fails to blow minds), a C-Max SE with heated seats and reverse sensors is available for a much more palatable $28,149 in Canada. There are no hybrid rebates from my government. Nor are there any plug-in rebates for the C-Max Energi in Nova Scotia like there are in the U.S., Quebec, Ontario, and British Columbia.

A lack of hybrid rebates aren’t the only issue. For any number of reasons, the C-Max Hybrid, like any other car, may not be right for you and your family. But isn’t it refreshing to stumble upon an affordable, family-oriented, overtly “green” car that doesn’t need to fall back on fuel economy as a crutch? This hybrid doesn’t need extreme efficiency to be a contender. It has it, but it doesn’t need it.

The C-Max’s dynamic repertoire, roomy passenger compartment, and modern infotainment could, on their own, be deemed sufficient.