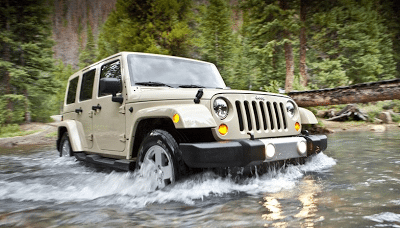 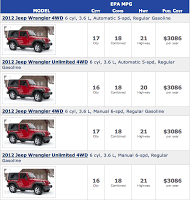 Now that we know Jeep will be selling the 2012 Wrangler with the Chrysler Group’s award-winning Pentastar V6, fuel economy becomes the main concern. Power will be plentiful: around 285 horsepower and 260 lb-ft of torque mark significant improvements over the antiquated 3.8L in the otherwise-improved 2011 Wrangler. It’ll be quicker, for sure, and it should stem the tide of complaints from lovers of Jeep’s old 4.0L inline-six.

Nevertheless, the current Wrangler guzzles fuel like a heavy V8 pickup truck, when it should drink more like the small-to-midsize sport-utility vehicle that it is. And fortunately, along with the better engine comes better efficiency. The EPA ratings for the 2012 Wrangler have been released and we’re looking at gains of up to 13% in the city and 11% on the highway. Yep, that’s only a couple miles per gallon at the most, but a couple extra miles per gallon is a lot when you consider the old Wrangler’s embarrassing 15 mpg city figures.
Broken down by model, the basic 2-door short-wheelbase 2012 Jeep Wrangler will be rated at 17/21 city/highway mpg when fitted with either the new 5-speed automatic or the standard 6-speed manual. That’s an 18 mpg average according to FuelEconomy.gov.
As for the long-wheelbase 4-door 2012 Jeep Wrangler Unlimited, highway mileage should be the same as in the smaller Wrangler, but city mileage drops a single mpg to 16. That’s for the 6-speed manual-equipped Wrangler Unlimited. If your Wrangler Unlimited is equipped with the 5-speed automatic, the EPA ratings are 16 mpg city and 20 mpg highway, still an average of 18 mpg, the government says.

Jeep Wrangler sales have more than remained steady in the last couple of months despite believeable rumours that this Pentastar V6 was about to replace the old 3.8L. The Wrangler was America’s fourth-best-selling SUV in June; Canada’s sixth. Whether Jeep can keep that up in the time preceding the 2012 Wrangler’s launch is another story. Two Chrysler dealers near GCBC Towers are nearly out of Wranglers thanks in no small part to $3200+ in incentives. They’re not anticipating receipt of MY2012 Wranglers until October, so it’s certainly possible we’ll see low Sales Stats reported by Jeep over the next couple months, though probably not in the July 2011 figures which will be released this week.

The Wrangler was already a Good 12 winner here at GoodCarBadCar.net. Its excellent new powerplant will only help matters when selection for 2012’s The Good 12 v5.0 begins, before improved fuel economy is even taken into account. The design isn’t supposed to be changing so The Good Car Guy has included a Gallery of the 2011 Jeep Wrangler Mojave below. Simple but beautiful, the Wrangler deserves to be discussed with images alongside.