Now that the 2012 Hyundai Accent has been officially priced in Canada, a hugely welcoming market for Hyundai, it seems as though the biggest rival for the popular Hyundai Elantra is not the 2012 Honda Civic.

With a better power-to-weight ratio, the new Accent should be quicker than the Elantra. Priced a few hundred dollars below a mid-range Elantra, a loaded 2012 Accent GLS, as shown in the spec chart after the jump, provides a few features you’d only find in an Elantra if you shelled out more moola. The Accent hatchback has significantly more cargo capacity and only slightly smaller interior dimensions. Besides, fuel efficiency goes the Accent’s way, albeit barely.

There was talk late last year that if there was one new car with the ability to overtake Honda’s Civic as Canada’s best-selling car, it would have to be the new-for-2011 Hyundai Elantra. Then in the first two months of 2011, the Hyundai Elantra was the best-selling car in Canada. Honda is expected to have supply problems in the early part of the summer, so is this Hyundai’s opportunity to strike back after two months spent succumbing to the Civic’s might? 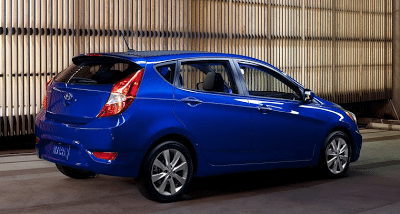 Well, yeah, maybe it is an opportunity for Hyundai… but which Hyundai are we talking about? The 2012 Accent sedan arrives at dealerships shortly; the Accent 5-door hatchback won’t be far behind, as The Good Car Guy reported earlier this week when posting Canadian prices for the 2012 Accent. In April, the dying third-generation Accent was the seventh-most-popular car in Canada with 2406 sales, 2818 behind the almighty Civic and 2146 behind the Elantra. You want to say this is because of big incentives on what was already a cheap car, but Accent sales in April were actually down from April 2010 when it was the fifth-ranked car.

So is the 2012 Hyundai Accent going to be the best-selling car in Canada by autumn? GoodCarBadCar.net isn’t going to put a bet on that (or anything else). Are Hyundai sales consultants about to start taking a lot of customers on two test drives, one in the Elantra and one in the Accent? Go ahead and place that bet.

Take a look at 34 objective categories in the spec chart to see the new Accent’s competitive advantage over the Elantra. Then see if you’re still tempted by the Elantra’s flowing bodywork.