Many months after Hyundai began selling the 2011 Sonata, Hyundai’s underling, Kia, will start selling the 2011 Optima. Although much is shared between the two midsize competitors, not least among which is the engines, the respective style of these two Korean sedans is strikingly unique.

Both the 2010 Hyundai Sonata and 2010 Kia Optima (Magentis in Canada) featured clean designs but missed the boat to excitement and got on board boring instead. Kia is undoubtedly a smaller competitor in the North American market, but it’s still worth noting the sales difference between the new Hyundai Sonata and old Kia Optima. Through three-quarters of 2009, Hyundai had sold 93,575 Sonatas and Kia had sold 30,830 Optimas in the United States. Through three-quarters of 2010 – once Hyundai had replaced the Sonata and Kia was forced to keep chugging along with a tremendously dull sedan – Hyundai Sonata sales had shot up to 149,123 and Kia Optima sales had dropped to 21,222.

Yes, Hyundai had improved the foundational elements of the Sonata. The 4-cylinder engine was smoother, the cabin was of higher quality. But the model lineup has actually been smaller; lacking the V6 option previously thought essential. The 2011 Hyundai Sonata’s design has played a gigantic role in its 2010 success. Doesn’t this bode well for the 2011 Kia Optima, especially since the 2011 Toyota Camry and 2011 Honda Accord, America’s best-selling cars, still stand out as staid, stuffy, and stolid? Look at the photo comparison after the jump and read more about the style differences of the Sonata and Optima. 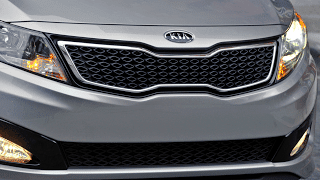 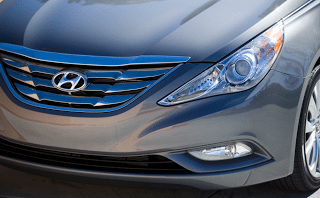 Viewed closeup from the front, the 2011 Hyundai Sonata’s headlights appear a little cartoonish, particularly since the grille slats are a little fussy to begin with. Overall, the look is dramatic, not a bad thing. The 2011 Kia Optima, on the other hand, is cleaner and more aggressive but the grille shape is obviously disjointed; the KIA badge sitting just atop the grille reinforces the disjointed feel. 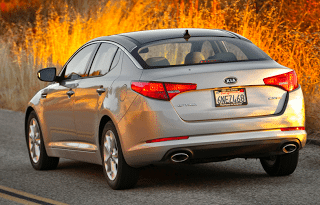 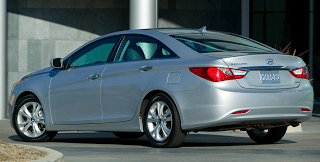 Unique in profile though it may be, the Sonata’s best view is from the rear. Taillights are perfectly proportioned, the arching trunklid is relaxed but still eye-catching, and the folded-in bumper is a great reducer of height. Some have said the 2011 Optima’s rear view is very Jagar XFesque. From this view, the way the car tapers down to the front is certainly XF-like, but again, the play on angles is a bit disruptive. United, the Kia’s idiosyncratic lines work very well, just as they do at the front. 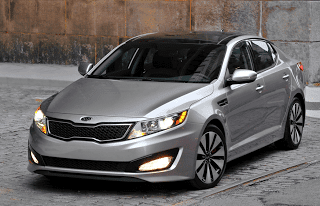 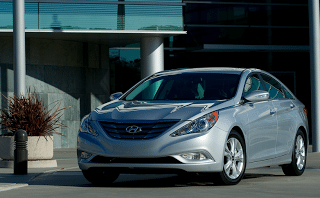 Walk away from the new Optima then turn around for a look at the front end. Strip away the Kia badge and this looks like a competitor in a much more expensive arena. Those huge fog lamps help form what becomes an angry snout; angry but still classy. Plus the lip underneath those fog lamps makes the 2011 Optima appear very low to the ground. The 2011 Sonata’s front end has certainly become its most famous face, obvious though that may sound. There’s a fair bit of Genesis Coupe in the meeting place under the grille where both headlights point. The flared space underneath the lights lends curvaceousness to an area not normally associated with shape.

Hyundai designers knew they got the Sonata’s profile perfect, so perfect that Hyundai decided to downsize the swoopiness to the 2011 Hyundai Elantra and 2012 Hyundai Accent. Indeed, the Hyundai Sonata wins the profile section of this photo comparison quite easily. Seen from the side, the Optima is nice but not all that alluring. The Sonata has far more of the Mazda 6‘s shape to it, far less obvious front-wheel drive proportions, and a noteworthy A-pillar to taillight character line. The Optima is clean but somewhat slab-sided. 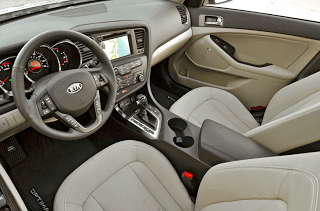 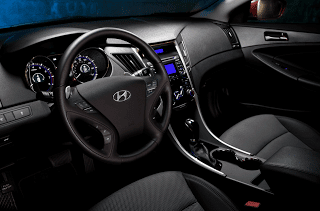 Kia is clearly trying to identify the 2011 Optima as a sportier choice. Notice how the nav, stereo, and climate controls are canted toward the driver? The Sonata, and most other cars, point their controls toward the middle of the back seat. The Kia, we’re supposed to believe, is driver-centred. It will eventually be available with the Sonata’s 2.0L turbocharged 4-cylinder, a 274-bhp device. Clearly dependent on trim levels, the interiors of both cars are attractive enough and certainly light years ahead of older versions.

The loudest applause is reserved for Hyundai-Kia as a group. Differentiating like-engineered vehicles isn’t the cheapest option and will never be the easy way out. General Motors met with success when the Buick Enclave, Chevrolet Traverse, and GMC Acadia all fell out of the same box looking like they were built by different automakers. Kia Optima sales are definitely going to rise, not only because the Optima isn’t a Sonata twin but because it’s a looker in its own right, very much more than the sum of its aesthetic parts.