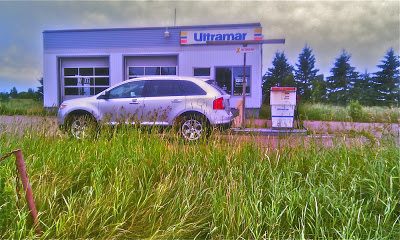 By the time we drove to the bottom of Bothwell Beach Road in our silver 2011 Ford Edge SEL AWD tester, there wasn’t a soul to be seen. This wasn’t surprising given that, on this mid-July afternoon, the temperature was just 16°C (61°F) and, to make matters much, much worse, it was raining. It was raining kind of hard. 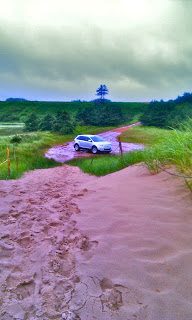 We arrived in terrific comfort, sure. But we hopped out of the Ford Edge preparing our bare feet for cold red mud (not the dry red dirt for which Prince Edward Island is famous). Then we strolled along the most beautiful beach I’ve ever seen on cold and wet sand.

Why is this journey to the best beach in the wooorld so important in a review of the 2011 Ford Edge? For starters, when the slope away from the beach is steep, strewn with all manner of imported rock and lacking in traction, the Edge’s all-wheel drive was called upon. It worked.

Second, and not at all unimportant, was the fact that this weather, though worse than what we’d encounter the remainder of the week, wasn’t really all that different from what we’d see on all but a couple of days. As you would thus assume, we spent a lot of time inside the Ford Edge: living with it, sitting in it, being bothered by it, and enjoying it.

Finally, this Bothwell Beach Road run is key to understanding the nature of the journey. Our 6-year-old American niece sure wasn’t going to get a sunshiny PEI vacation, but we would drive near and far, fast and furious, in search of a beach with sand dry enough to take home to her mother, who’d never had the privilege of visiting the Gentle Island.

A disclaimer before we continue then. Don’t judge Prince Edward Island’s weather based on the week our Edge and our niece suffered through. It’s really always divine. Just not in mid-July 2011. And on that note, how did the 2011 Ford Edge SEL AWD cope hauling three passengers, tons of camping gear, a dozen filthy beach towels, and multiple beach artifacts? Read on after the jump for The Good Car Guy’s complete Driven review of the 2011 Ford Edge SEL AWD. 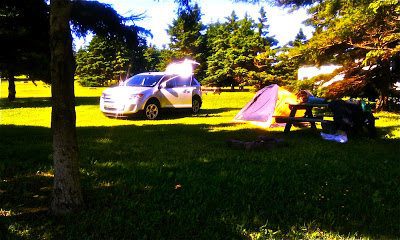 It had been a while since I’d last been able to lounge about in a Ford product for such a lengthy period. The Taurus from the fall of 2009 wasn’t geared to my taste, being a big sedan my grandfathers would have loved and all. Nevertheless, that Taurus demonstrated Ford’s strength in making large automobiles feel surprisingly nimble and even, I reckon, a bit fun.

Indeed, many of the same words could be used in an Edge-related discussion. For a reasonably sized machine, it weighs too much. At 4266 pounds the Edge isn’t particularly weighty in contrast to its rivals but it feels heavy when maneuvering around a parking lot and when you first shove off.

Then, as I suspected, the Edge’s 285-horsepower 3.5L V6 takes over and provides decent shove. Passing power on rural two-laners was plentiful, all the more so as revs rose toward the 6500 rpm power peak. Brake feel was consistent just before turning in. Then, upon turning in, despite the anticipated lack of feel and proper weighting through the steering wheel, there’s a pleasing amount of outright handling ability present in the Edge. We’ve come to expect this in Fiestas and Focuses and Mustangs, too, but the Edge, going about it differently of course, copes with corners like a heavy low-slung sedan, not an SUV with 70 cubic feet of cargo capacity and eight inches of ground clearance.

The Ford Edge isn’t at all sporty, but that’s what makes its handling awareness so much more impressive. The ride is serene and there’s none of the annoying stuff that comes with an overly aggressive crossover. Yet the Edge manages to cope admirably when challenged by a rather aggressive driving manner. It feels as though the Edge would be a swell starting point for an SVT product.