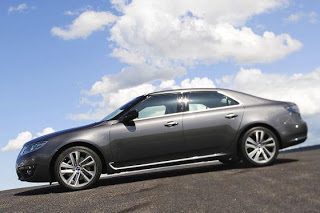 Any search for critics of anything won’t take long. Criticize Michael Jordan for gambling. Criticize Barack Obama for trying to do too much. Criticize Ferrari for charging too much. That’s the best basketball player ever; the most popular public figure in a long time; and the most revered automaker in the world.

Move onto Saab, Sweden’s tier two automobile manufacturer, and critics exist around every corner. Saab doesn’t sell very many cars. The cars it sells aren’t very good. It borrowed a Subaru hatchback and worsened it. Then a Chevy truck-based SUV became an undesirable Corvette-powered Saab ute. That’s besides not making any money. And not even existing in a Saab-like fashion.
Here comes the 2010 Saab 9-5, however, and it doth look comely. Then again, the ’03 Saab 9-3’s original pictures were paired with excitement from across the car media world. Alas, it has not become the 3-Series beater we all hoped it would be. Is the 2010 9-5 the 5-Series beater we know it needs to be?
We can only judge pictures for now: the 9-5 has a bit of a droopy tail. From the front, things are Saab enough but also very clean and contemporary. Inside, typical features like a console-mounted ignition and a cockpit-shaped dashboard are again very Saabesque but… better.
Better enough? Specs, reviews, and price will reveal the truth.