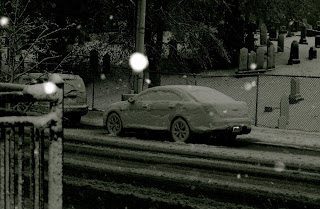 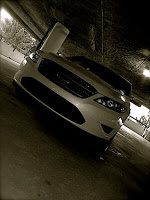 “It takes a long time to turn a big country around. Just be of good cheer and keep working on it,” the 42nd President of the United States once said. If Bill Clinton were comforting me these last few days instead of the whole of America, he’d have used the word “car” instead of “country”. Because my fellow Ameri… er, auto enthusiasts, living with the new Ford Taurus is an adventure inherently related to the size of this car, first and foremost.

GoodCarBadCar.net has already gone over the Taurus’s dimensions in detail. Not only is the Ford larger than its direct rivals, its specs also prove plenty of large vehicles are smaller than the Taurus in one direction or another. Thankfully the Ford isn’t a monster on the outside with little fruit to show for it in the cabin. Rear seat space isn’t special, but there’s plentiful knee-room to be found for big people way back there. Ford clearly devoted more attention to the trunk where the Taurus’s measurements make its cargo carrying capability better than almost any other sedan on the market. 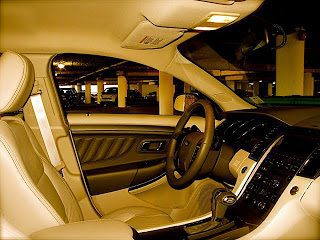 Analyzing The Taurus’s Dimensions
Opting for the Taurus in SEL trim won’t net owners a luxury car by modern standards, but surely the Taurus more than meets your needs. Leather seating surfaces, abundant power features, a thumpin’ sound system, heated seats, SYNC, dual-zone climate control, obligatory rear parking sensors, and a steering wheel built for reach and rake make for pleasant accomodations. However comfortable the seats initially seem, side bolstering is all but nonexistent; a problem in a car with surprisingly little body roll in corners. Hold me in, please.
Stereo and climate controls are designed with gloved hands in mind – finding a satellite radio station playing something other than Miley’s “Party In The USA” won’t be hard on cold snowy mornings like today. It’s nice to place the steering wheel (and the adjustable pedals) exactly where I want everything, but Ford’s designers were sniffing some seriously high octane junk on Steering Wheel Shape Day. Perfectly thick on the sides. Thinning in an acceptable way on the bottom. But wait, what’s this: the top third of the wheel is spindly, thin enough to remind me of very old Buick Centurys. Yuk. As a nod to senior citizens, this steering wheel earns a wag of the finger from The Good Car Guy.
Checking Out the Ford Taurus & Its Most Direct Rivals
Upon exiting Fairley & Stevens‘ lot in Burnside with some verve, my first thought was slight disappointment with the ponies. 263 horsepower just ain’t what it used to be, at least not when hooked up to 4,224 pounds of Ford four-door. Car & Driver tested the Taurus with this 3.5L V6 and published a 0-60mph time of 7.0 seconds. While 263-bhp may provide lesser acceleration than we’re accustomed to as a result of the Taurus’s portliness, the non-turbo 3.5L provides enough thrust for aggressive driving.
No less important than the satisfying V6 is the chassis’ competence on twisty roads. Indeed, even this non-SHO Taurus copes admirably when chucked into tight, slow-speed corners. The Nurburgring may reveal a car’s tendencies in high-speed situations on wide open sweepers and bumpy switchbacks, but if a big car can’t cope with twisties in low-speed situations, if its discomfort is manifested, then the car’s overall ability to grip and handle might as well be forgotten.
So I took the Taurus to Shore Drive in Bedford, Nova Scotia, and kept the speedometer in an appropriate range for a residential community. On a grimy November day, the Ford revealed just two faults on this tough test. Brief but steep inclines resulted in a complete lack of visibility because the Taurus has a very un-Honda, very Mustangesque cowl height. Only the falling leaves at the tops of trees were noticeable to me. Looking through the rear window is more difficult than peering past the pillars in the cheap seats at the old Montreal Forum.
Early Impressions Of The 2010 Taurus
Ford Taurus – 3 To Beat
Worse than lack of a greenhouse is the absence of fun. Yes, I was driving slow. Yet even more typical car-testing drives later in the week neutralized the Taurus’s spunky V6 and flat cornering. Does the Taurus shrink when pushed hard? A little bit, luckily. Pushing the Ford Taurus hard is not far from driving in absentia. You won’t feel a thing either way. This Taurus does handle nicely, remaining level without excessive understeer; but it does so without any interaction. There’s just no way this is a car to drive but rather a great car to be driven in. 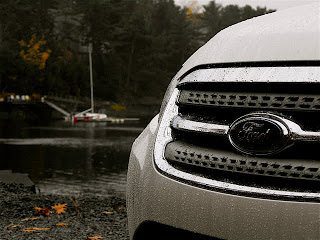 Indeed, a terrific car in which to be driven. Bumps, holes, yumps, dips, hardened slush, and uneven surfaces are dismissed with nary a second thought. If your goal is to be isolated from the great outdoors and from anything underneath four wheels, this has got to be one of the best cars for such a purpose. One gets the feeling that the Ford Taurus is, in a voice imperceptible to humans, quietly whispering to the wind and the road, “Silencio“. Yes, roads these days speak Spanish and wind is now multi-lingual. Quite seriously, a Ford Taurus, kitted out as an SEL and equipped with all-wheel drive, feels like an utterly safe and predictable way to transport thyself from A to B. You won’t remember anything in between and there’s no reason to take the scenic route except for the landscape, but the Taurus keeps the world at bay.
GoodCarBadCar.net’s Ford Taurus SEL Photo Gallery
Preconceived Notions From An Anti-Taurus Generation
In Canada, Ford’s Taurus SEL runs up against the $35K barrier with all-wheel drive. A base Taurus can be had for $1.00 less than $30,000. Opting for the Taurus Limited, surely a car Ford will build in numbers as great as can be sold, starts just over $40,000 although the one in Fairley & Stevens‘ showroom was optioned up to $48+, the price of an SHO. South of the border in Ford’s homeland the Taurus starts at $25,170 and rises $12,000 to the SHO. While in Canada the Limited is fitted with all-wheel drive as standard equipment, customers in the U.S. see all-wheel drive as an option. SHOs are all built with all-wheel drive, in addition to being the exclusive Taurus home of the EcoBoost 365-bhp twin-turbocharged V6.
Obviously the Fusion has taken the place of the Taurus as Ford’s Camry/Accord competitor. Certainly the Fusion offers more of a driving experience than the Taurus, but the appeal of the bigger Ford is hard to ignore. Coping – yes, coping – with the Ford Taurus’s bumper-to-bumper, mirror-to-mirror amplitude will be the biggest reason I can think of for anyone rejecting the Taurus after first being impressed. Apart from that, a joke of a steering wheel and some hard plastics on the centre tunnel shouldn’t be enough for dismissing the Taurus as a viable family car.
The 2010 Taurus is too big to be heartily recommended but too good-looking and comfortable to be denounced. Regardless of its bulk, the Taurus shoots ahead of many a midsize sedan and most full-size sedans as a sedan of choice for North Americans with large garages.