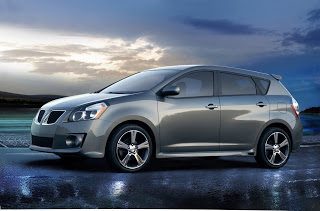 Ranked in GoodCarBadCar’s Top 5 American-branded vehicles. A frequent recommendee from The Good Car Guy. One of the most practical small cars available to North American buyers.

And it’s ripe for an update. 2008 should see a new Pontiac Vibe at dealers near you, tagged as an ’09 along with Toyota’s latest Matrix. The Matrix and Vibe have been platform-mates from the womb, and nothing’s about to change.

The real live debut of the Vibe will come after the Matrix is revealed at the SEMA show in Vegas – the Vibe isn’t due to hit the Los Angeles auto show floor until later in November.

You’re safe in believing that the hi-po Vibe will return. All-wheel drive is expected to be on the option list, as well, but let’s hope the AWD isn’t paired exclusively to the least powerful engine. I think you’ll agree – Pontiac/GM designers succeeded in achieving their brief.