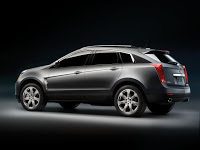 Great Porsche 911 comparisons take place against which car: a) Audi R8 or b) Mercedes-Benz SL or c) Nissan GT-R?
None of the above. The best and most common car with which every new 911 Carrera must be compared is the 911 which came before. Thus, the latest Porsche 911, the 997, is contrasted with the 996. Is it softer, larger, faster? Meanwhile, the 996 vs. 993 comparo was one of the most serious to come about as a result of the switch from air-cooling to water-cooled engines, amongst other controversial choices.
Now, the Cadillac SRX can’t begin to approach the epic status of the Porsche 911. Yet the switch from General Motors’ Sigma platform to the TE foundation is far more of a change than just about any Porsche 911 evolution. Mainstream automotive media would have you believe that Cadillac’s introduction of the new TE SRX is akin to Honda introducing the next Accord as a Civic-sized sedan. Not only will Honda continue to evolve the Accord, but the SRX’s own change isn’t that significant.
That being said, it’s significant enough for The Good Car Guy to lay out the major dimensional and specification differences. For more on the 2010 Cadillac SRX, click here. Look below for a Gallery of the current ’09 SRX, the Sigma crossover. (Click chart below for a larger view of the spec sheet.)

In a complete reversal of normal modern procedure, the SRX’s dimensions are shrinking. But is it paying off? One would hope there would be gains in fuel efficiency (hardly) and in terms of parking ease and maneuvering (barely, based on scant decreases). Passenger space is down; cargo space, too. One would hope for more momentous Cadillac-like improvements. As of this moment, it’s not clear that the new SRX is any more “the standard of the world” than the old Sigma SRX.