THE WORST CARS EVER?

Worst, or worse, or as some 5-year olds and Shakespeare say, “worser”, are very harsh words. TIME magazine, that paragon of weekly print media, has applied such a word to 50 cars.

Why is TIME bothering with the worst that automobiledom has to offer? I don’t know. 50 Best lists are much more worthy of my critique, but critique I will anyway. Because TIME’s regular editors are more commonly used to opine on issues like Iraq and Obama, TIME used a terrific and experienced automotive journalist to help out. Me.

No, just joking. A guy by the name of Dan Neil, who has written for Car&Driver and some dailies. Automobiles were divided by their era. Cars of today were joined by vehicles built as far back as 1990.

The worst vehicles from 1899-1939 were mainly representative of unsuccessful attempts to further an amazing new invention. TIME thought seven was enough. Eight cars from 1940-1959 were a bit of mish-mash between wretched cars and awful attempts to sell people something they didn’t want. A car like the Edsel, which was actually this list’s reason for being. It’s been 50 years since the Edsel smacked the North American marketplace, so TIME thought it would dishonour the Edsel and 49 other cars. Chrsyler’s Imperial LeBaron Two-Door Hardtop from 1971… please spare me.

TIME and Neil admit that many of these vehicles have huge fan clubs and I would add that plenty of people would have used something like, the Renault I would classify the cars from 1960-1974 as stupid cars. The Renault Dauphine of 1956 as their first car and loved it. Nevertheless, they make the list.

Cars from 1975-1989 dominated the list. 17 cars from that age made the list, and I could think of a few more qualified candidates. The stupid ’75 Bricklin, slow ’80 Corvette ‘California’, ugly ’85 Mosler Consulier, and unnecessary ’82 Cadillac Cimarron.

s from 1990 to today made the list. So says the article: “In its very success, the Ford Explorer is responsible for setting this country on the spiral of vehicular obesity that we are still contending with today.” In other words, TIME lays upon the 1995 Ford Explorer, America’s best-selling passenger vehicle for 14 years, the responsibility for creating a fuel-swilling, bigger-is-better mentality. Ouch.

GM’s EV1 was, as TIME says, “a marvel of engineering, absolutely the best electric vehicle anyone had ever seen.” Doesn’t sound so bad, does it? The car, however, could not supply what the market wanted. It was small, lacking in range, two-seat only, and didn’t live up to its own promise.

The Plymouth Prowler made the list for reasons which conquered its good aspects. It looked incredible (those front bumpers sucked) and it wasn’t ridiculously expensive.

Plymouth’s hotrod makes the list because it wasn’t. A hotrod, that is. 3.5L V6’s producing 250 horsepower, when paired with an automatic transmission do not a hotrod make.

1998’s Fiat Multipla, as mentioned in the GCBC Auto Olympics recently, made the list in spite doing exactly what it was meant to do beautifully. It was, as TIME says, “tragic to look at.” Reason enough. TIME gives the Ford Excursion credit for pioneering the use of a bar which kept the Excursion from ‘rolling over anything unfortunate enough to be hit by it’. The Good Car Guy had an experience with an Excursion, too.

Poor Jaguar. Its X-Type has always suffered much malign. TIME criticized Ford’s business strategy in making the X-Type and its core belief that there was money to be saved. Once again, credit is given. Which speaks volumes regarding the goodness of today’s automaking compared with that of the 70’s or 80’s or even 90s. “It hardly matters that the X-Type was not that bad a car. Young affluent buyers had the feeling they were somehow being grifted. They were,” accuses TIME.

Pontiac made the list with, you guessed it, the Aztek. Slathering the Aztek with the charge of creating instant hatred, TIME says that “We like cars that look like us” and the Aztek didn’t. It had ‘multiple eyes and supernumerary nostrils’ and looked ‘deformed and scary’. Some measure of praise was given when TIME said that despite its ugliness ‘there was a useful, competent crossover’. Useful? Competent? Soft praise.

I hate the way BMW’s 7-series looked when it debuted in 2002. I also knew that iDrive was not the way forward. When a BMW salesman told me that any true owner of the 7-series (rather than a journo or test-driver) adjusts to iDrive quickly and doesn’t have to dig into its computer depths too frequently, I began to understand BMW. TIME places the latest 7-series on its list of 50 worst cars ever, and I gotta say, I disagree. BMW is not enduring the wrath of consumer hatred; not by any measure. The car and its offspring are too successful to consider the 7-series one of the 50 worst.

Hummer’s attempts to bring military-lite to the mainstream were, in fact, too heavy and thirsty. “The H2”, says TIME, “was a spiteful reactionary riposte to notions that, you know, maybe we all shouldn’t be driving tanks that get 10 miles per gallon.” General Motors used Hummer to create a vehicle that was, “arrogantly huge, overtly militaristic, openly scornful of the common good.” I’d put it in the 5 worst ever.

Chevrolet’s SSR wasn’t fast enough. But it also wasn’t what people wanted. Do I care about hardtop convertible trucks? I’ve seen maybe two or three SSR’s apart from television and photographic appearances. True, it was heavy and underpowered. TIME also concludes that “Hotrods are homemade subversions of the existing order, mechanical folk art. There is no such thing as a factory hotrod. Seems obvious, in retrospect.” Good point. 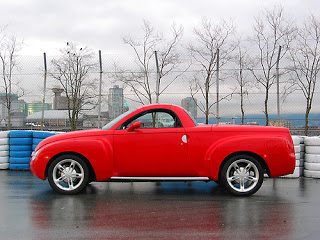