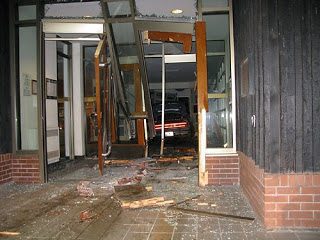 WOMAN RAMS CAR INTO LAW COURTS IN P.E.I. – WHAT KIND OF CAR IS IT?

Prince Edward Island is Canada’s smallest province, connected to the mainland by the Confederation Bridge or Northumberland Ferries. Fewer than 150,000 people live on the island, famous for Anne of Green Gables and potatoes. It’s a peaceful place. Vacations to P.E.I. in a variety of cars have resulted in posts here at GoodCarBadCar.net like the Infiniti FX, Toyota Yaris, Kia Spectra, Nissan Versa, Nissan Sentra, and Ford F-Series.

Peaceful, it was, until last night. It’s estimated that $40,000 in damages was caused by a woman who rammed her car into the Sir Henry Louis Davies Law Courts Building in the capital and largest urban area, Charlottetown.  Oh, and she didn’t ram just once; not twice; not just three times…. but four times. Eventually, the woman and her car were inside the building some 13-18 metres (40-60 feet).
Now that the woman is at the hospital being cared for in a variety of ways and the insurance adjustors have done their work, it’s our job to decipher what kind of car she was driving. Ordinary automobiles may not stand up to such cruel treatment nor are they able to inflict such treatment upon a large building. Photos courtesy of Tom Peake and The Guardian. Despite my responsibility to know such things automatically, I can’t come to any conclusion other than an early 90s Buick Century. 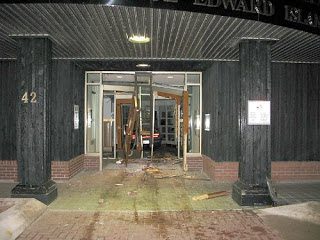