WHAT’D YOU SAY? ISUZU? WHO?

pretens he doesn’t recognize the name Kobe Bryant? As a certain online dictionary puts it, “…O’Neal would refer to Bryant only as ‘that guy’, or ‘the other guy’. When asked directly about Bryant, O’Neal typically would either feign ignorance as to who Bryant was, or simply act as if he had not heard the question.”

The two won a bunch of titles together in the world’s foremost basketball league. But Shaq seemed, for a while at least, to forget who Kobe really was. Kobe Bryant – who? I’m not familiar with that name. 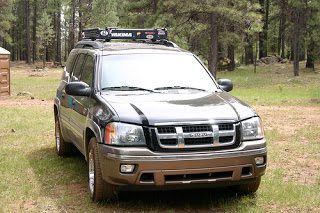 Izuzu is one of the world’s mass producers of trucks. Trucks that are used for waste disposal and other commercial enterprises, and pickup trucks that sell especially well in Africa and southern Asia.

North America was once a stable environment for Isuzu vehicles – meaning vehicles for personal use. Presently, there are no Isuzu cars; one Isuzu sport-utility vehicle; and one pickup truck sold in a couple configurations.

Toyota has a small stake in Isuzu, but General Motors portion fell drastically and then disappeared about as fast in this present decade from what was once 49%. Isuzu sold less than 30,000 vehicles in North America during 2004, and over 2/3rds of the total was made up by vehicles it had cancelled, the Rodeo and Axiom.

Canada once featured plenty of Saturn/Saab/Isuzu dealerships, but Isuzu left Canada behind in 2003. (Thanks for leaving, don’t….. SLAM the door on your way out.) What’s left to make up Isuzu’s product lineup? Its SUV is a rebadged and regrilled Chevrolet Trailblazer. Which also means it’s a GMC Envoy, and it was once an Oldsmobile Bravada (see yesterday’s post here) and Buick Rainier.

The pickup is just another redo, but of the small Chevrolet and GMC; Colorado and Canyon. They call it the i. But they add some numbers to signify the engine capacity, i290 and i370. Such excitement. With that kind of showroom appeal, what can Isuzu do to improve? Well, perhaps because of their dwindling sales and the obvious need to find money in somebody’s wallets, Isuzu has chosen the obvious route.

This is the interesting thing: when Chrysler can’t sell cars, they put a wad of cash on the hood and call it Chrysler Employee Pricing. Everybody works for Chrysler, they say. When Chevrolet can’t sell an aged large sedan, they add equipment; offer 0% financing rates; and lower the price.

But Isuzu wouldn’t do that, no no no. Nobody wants to buy an Isuzu Ascender, therefore the obvious marketing tactic is a rising MSRP. Last year you could buy this Explorer/Pilot/Highlander/Trailblazer competitor for $26,694 in the USofA. For 2008 – $28,619. Sure, side airbags will now be standard. And your local Isuzu dealer will surely hang a handsome deal in front of your face.

But doesn’t this strike you as a humourous headline? “2008 Isuzu Ascender Gets Price Hike” Stop the press. Pay attention. Behold and see. Be aware. On your toes. You can now buy a more expensive…. what was it again? Oh, right, an Isuzu. To paraphrase and twist the words of a giant, “I’m not familiar with that brand.” 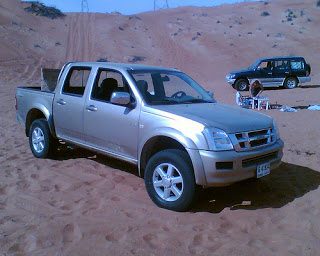