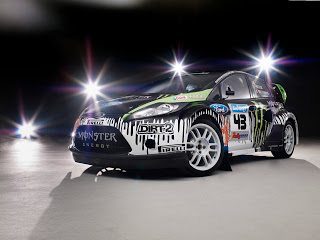 Part Two of Ken Block’s Gymkhana Three isn’t meant to be easily forgotten. Inside an excitingly tuned-up version of a 5-door Ford Fiesta, Ken Block drives around l’Autodrome near Paris, France, Ken Block performs as impeccably as ever. Compared with the airfield videography in Ken Block Gymkhana Two, the general feeling of the clip is a bit of a letdown. For all I know, it could be the light. Or the director’s decision to allow more real-time footage into the final product. But who cares? Never has the already good-looking Ford Fiesta looked so good. Or driven so hard. Around such a complicated and characterful – and steeply-banked – course. Ken Block does some amazing things with this Fiesta.

In the video you’ve probably already watched below, the moments most enticing to me were those filled with the accelerative force of the 650-bhp Ford Fiesta. Enjoy those bursts at 2:05, 3:19, and 4:23 in particular.

One more thing before you press play. Watch this clip in full screen mode. It’s high quality, and you’ll want to see every speck of dirt fly.