Canadians are proud of their ability to play hockey, get along well with one another, fish through ice, cut down trees, and…. build cars. This isn’t just a recent feat, the manufacturing of automobiles. Studebaker was building cars in Hamilton, Ontario in 1947. How fitting then, that every car made in Canada today is also made in the populous province of Ontario.

In June of 2009 The Good Car Guy published a list of all vehicles made in Canada at the time. This list has been amended. An updated version is listed below along with the area of Ontario in which the vehicles are built. There’s even a nice image provided by Industry Canada and a handy Google Earth-marked image to map things out for those not familiar with southern Ontario. 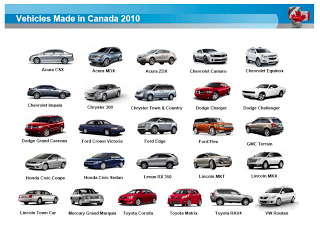 For the record, the stereotypes above are just that: stereotypes. The Good Car Guy played lacrosse, volleyball, and basketball for his junior high school; table tennis internationally; and even won the Austin Clay Court Open in Austin, Texas many moons ago. He works as a freelance auto writer, doesn’t always get along with other drivers, and doesn’t build cars. And wouldn’t know how.