Earthquake-related woes continued for Japanese automakers competing in the United States in July 2011. That didn’t stop the Toyota Camry from retaking its monthly best-selling car crown. Obviously, then, the Camry was also going to be the top midsize sedan. Indeed, the Camry beat its nearest rival, the Nissan Altima, by 5676 sales. It wouldn’t be a crime to throw the Toyota Venza in with the Camry, either, and that would give Toyota nearly 32,000 midsize sales.

Sticking with the Toyota theme, year-over-year sales of the Toyota Prius were down 44% in July. Yet the Prius came in above the Chrysler 200 and Kia Optima, two increasingly popular nameplates. Even before the March 11th earthquake/tsunami/nuclear disaster in northern Japan, Toyota wasn’t having its best year in the United States. But in this first midsize car sales chart you see below, Toyota presents to you 39,634 sales.

Setting aside volume, no car in this first chart suffered a worse year-over-year decline than the Honda Insight, down 47%. Kia Optima sales, meanwhile, were up 265%. The Chrysler 200 was up 111% over the Chrysler Sebring which it replaced. Buick Regal sales more than doubled, as well.

One thing was made very clear in this chart The Good Car Guy published last month: the midsize car segment is tougher than it’s ever been.

Americans still love spacious cars, but more and more often, the replacements for midsize sedans feature such commodious rear seats and such vast trunks that moving up to a more expensive, less fuel efficient large car would feel foolish. In fact, based on interior dimensions, some of the cars in the midsize chart above are large cars, as classified by the EPA.

This doesn’t mean buyers aren’t at all interested in more spacious machines. Aside from the defunct (and luxury-badged) Cadillac DTS and Lincoln Town Car, the police special Chevrolet Caprice, and the dead Buick Lucerne, American car buyers acquired 34,411 big sedans in July. However, every one of those cars except the Chrysler 300 sold in smaller numbers this July than they did in July 2010. Worst off, in that regard, was the Chevrolet Impala, down 50%. Sales of mainstream large cars aren’t at unhealthy levels… yet. 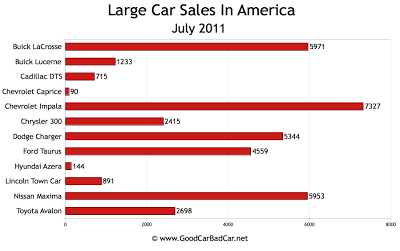 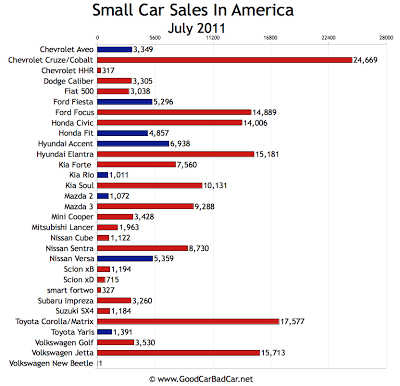 By their very nature small cars are less profitable; this is not up for argument. Small cars are nonetheless volume players in a way large cars aren’t likely ever to be again. There are 190,401 sales represented in the small car sales chart shown above this paragraph, 5.5 times more sales than you just saw in the large car sales chart.

It’s not just the Honda Civic and Toyota Corolla that’ve been struggling with supply issues. Other small cars, the Ford Focus and Hyundai Elantra in particular, have faced higher than expected demand and thus aren’t as readily available as you would think. This partially explains the Elantra’s sudden 17% year-over-year plunge, not to mention its 24% drop from June. Perhaps having an even greater impact on the Elantra’s success was the 2012 Hyundai Accent’s strong presence in Hyundai showrooms. Accent sales improved 75% from July 2010. As we’ve already explored, it is a rather strong rival for the Elantra.