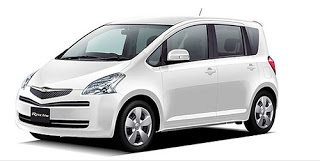 GoodCarBadCar’s opinions have been made clear regarding Toyota’s Yaris in both Part I and Part II of this Yaris diatribe. You’ve been informed about the Yaris’ place in the market and read a healthy dose of driving impressions. Now it’s time to move Across The Pond.

Up to this point, Across The Pond has explained the current state of Skoda and Renault and the availability of Lexus’ first diesel. This time around, we’re crossing the Pacific to view the Toyota Ractis.

Once upon a time, not long ago, Toyota sold a Verso version of the Yaris to European buyers. In a vein similar to that of Renault’s Modus and Vauxhall and Opel’s Meriva, the Yaris Verso was a tall, MPV-style version of Toyota’s small car. Had this car been available in North America, it would have competed with the name Echo Verso, perhaps. This car is still available in that form in parts of the Caribbean, such as Guadeloupe. Toyota of Guadeloupe says the Yaris Verso is, “An intelligent minivan for today’s family.”

Apologies for the digression. Back to the Ractis. No longer sharing the strong brotherly face with the Yaris, the minivan variant still rides on the same platform. This architecture is also used under Scion’s new xD. The beliefs and ideology among North American carmakers and automakers who import cars to North America says that ‘we’ think bigger = better. Chrysler applied that method to the K-Car and have had some very measurable success with the Grand Caravan, as you well know. Cadillac applied that mode of thinking to the Escalade, which is why we now have the Escalade ESV.

But automakers are reluctant to import vehicles which add practicality via increased height, however successful they may be in other parts of the world. Admittedly, the Toyota Ractis could be perceived here in Canada and the USofA as a slightly odd-ball vehicle. Take a step up the size ladder you can see Mazda’s accomplishments with the 5.

Here’s your homework: Hit up www.ractis.com and watch the ‘Special Movie’ if only for the language. ‘Ractis Style‘ and ‘Ractis Drive‘ are good sections, but the purpose of this vehicle can only truly be felt in ‘Ractis Space‘. I squeezed in a surfboard and bicycle by clicking and dragging, but inserting the sofa caused the board and bike to be quickly thrust out. I was able to fit in a large cooler, a new lamp, and some shopping. Swell.

If you’re at work, adjust your volume control downward before you head over to Ractis.com. The J-rock gets a little loud. Toyota in Japan outfits the Ractis with engines equivalent to, or slightly smaller than the Yaris we see on North American roads. Before you ask me why the Japanese name isn’t simply the Vitz Verso, appreciate that Ractis is perhaps a little cooler than FunCargo, the name of the Ractis’ predecessor.