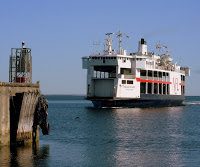 Prince Edward Island receives a fair amount of attention on GoodCarBadCar. There’s a few simple reasons: vehicles we test seem to end up on PEI roads; that happens because PEI is the home province of The Good Car Girl and her family and the home province of The Good Car Guy’s own family. We holiday there as much as possible. (Follow this link to Part I of the Yaris overview.)

Thus, the Toyota Yaris we took possession of in August for 48 hours spent about slightly more than half of that time on PEI roads, much of which is shouldered by PEI’s famed red dirt. The pictures you see in this post were taken on that trip on our own Nikon.

You can see the view back to Nova Scotia from the Northumberland Ferry, Holiday Island, as well as the

boat itself, which is the elder statesmen in NFL’s fleet. The parked Yaris is at Cavendish’s busiest shopping mall, The Boardwalk and the view of the Yaris’ profile is seen at a lookoff near New London.

Our blue 5-door hatch was equipped with the 1.5L four-cylinder just like every other Canadian-sold and American-sold Yaris. Suggesting reading on that topic is found in Yaris Part I. Power is plenteous enough, but the 4-speed auto not only crippled the umph of the 106bhp engine, it also produced unwanted gear-hunting and caused pregnant pauses in between gears. All of which would lead the not so horsepower-familiar consumer to believe this car has 15-20 fewer horses.

14″ wheels are never going to work with electric steering to provide a stirring driving event. The steering is lifeless and way too light. Understeer is prevalent, but no more so than expected. With light and uncommunicative steering, you find yourself entering a corner and adjusting your line constantly, regardless of the attack-level you assume on your commute; 10/10ths or 4/10ths.

The side-effect you get to enjoy as a result of this weightless and lifeless steering is ease-of-use. Parking the Yaris is smart fortwo-like, or as close as a normal car can get to smartish parking. Interior controls are placed where you want them to be 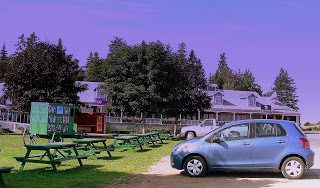 . Combine that with parking ease, an automatic transmission and a suspension that manages to soak up bumps despite its short wheelbase and you have an easy car. An easy car could be considered a good car, although I would prefer some measure of challenge.

Other contributing factors which could be applied in an argument which could conclude that the Yaris is a good car include Toyota reliability/dependability/quality, impressive fuel efficiency, and its shadow-to-space ratio. Toyota’s generally stick together. Nobody can say for sure if a ten-year old Corolla will last another 10 or 15 years, but it’s not terribly unlikely. Put that in the Yaris’ good column. We consumed 6.45 litres of gasoline for each 100km we drove. Energuide.ca estimates 7L/100km in the city and 5.6L/100km on the highway. Judging by our results, that’s perfectly believable. If we were to assume the ratings which the United States website, fueleconomy.gov, applies to the Yaris, we actually finished 1mpg better than its highway estimate but 3 worse than the old standard’s rating of 39mpg. 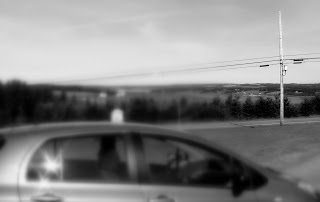 The Yaris drove exactly as I expected it would. No excitement – more fun than the Nissan Versa but less of a thrill than the Honda Fit. Comfortable and obedient – more so than both the Versa and about equivalent with the Fit. Perhaps the Yaris isn’t real-world spacious like a Versa or Fit, but it sure is space efficient. Do a blindfolded entry, remove the blindfold, feel around, and estimate the exterior size of the car. You’d be wrong. An exciting car – no. The Yaris does not go above and beyond the call of duty, but it fulfills most buyer’s demands. Without visiting the Shell station too often.