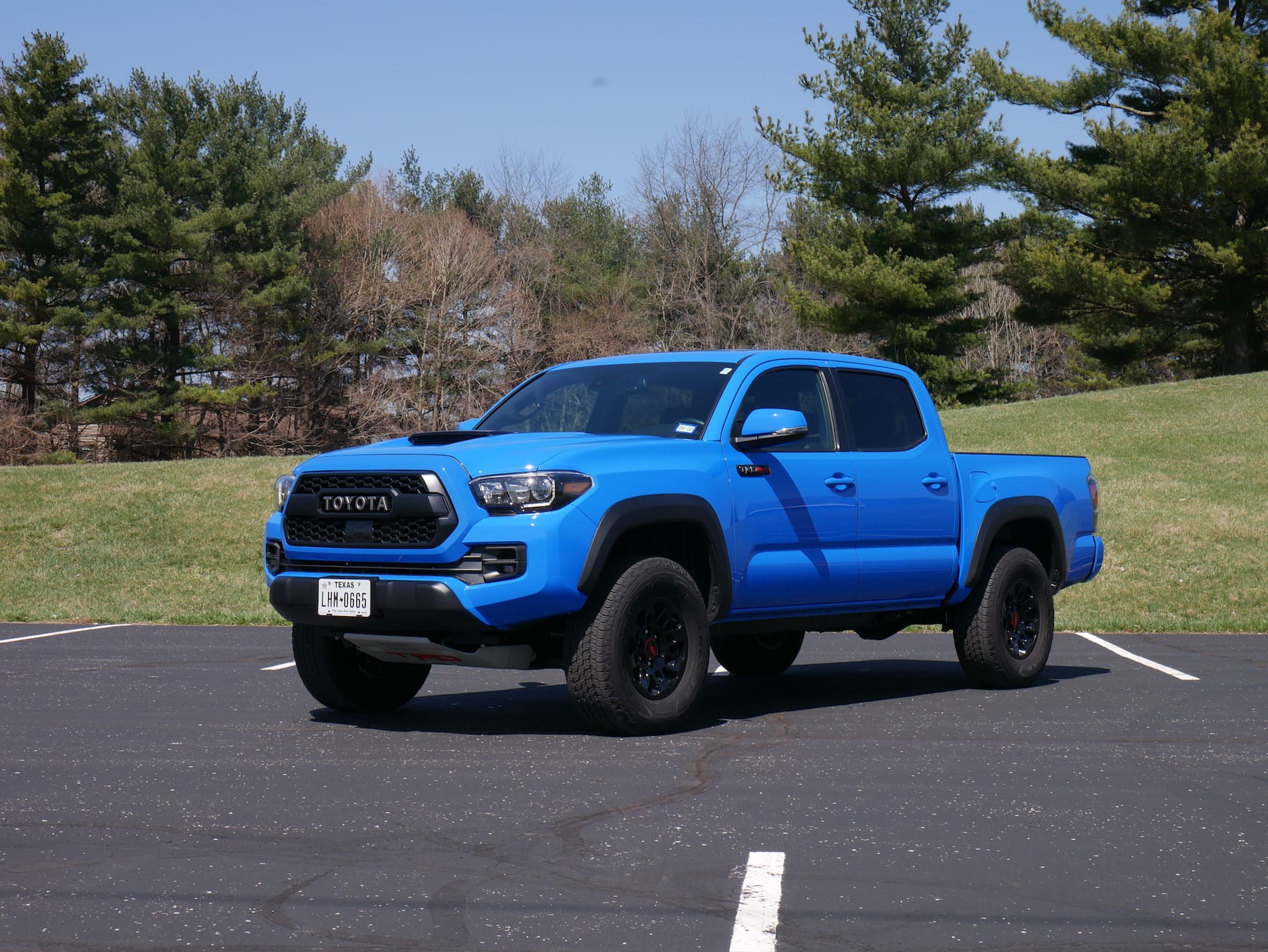 One thing about many midsize trucks that annoys me is how big they are. The Toyota Tacoma might fit into the midsize truck category, but it sure looks and feels big.

When you park it next to an older Tacoma you realize midsize pickup trucks, like everything else in America, have only swollen as time marched on. The Tacoma isn’t the only one, and that doesn’t make these trucks bad machines. On the contrary, they’re actually better than ever before.

The venerable Taco is bigger, better, and more capable than ever. With that said, can it really stack up to the rest of the competition in the segment? Is the best Tacoma enough to be the best midsize truck out there? I spent a week with the vehicle to find out. The Toyota Tacoma is a midsize pickup truck available in several different trim levels and cab configurations. You can get an Access Cab or a Double Cab. Toyota’s Access Cab is an extended cab the Double Cab is like a little crew cab.

There are six different types of Tacoma to choose from. Here’s the list: SR, SR5, TRD Sport, TRD Off-Road, Limited, TRD Pro. The TRD versions have more off-road equipment and the other models are the street-focus ones, with more luxurious features as you climb the ladder. 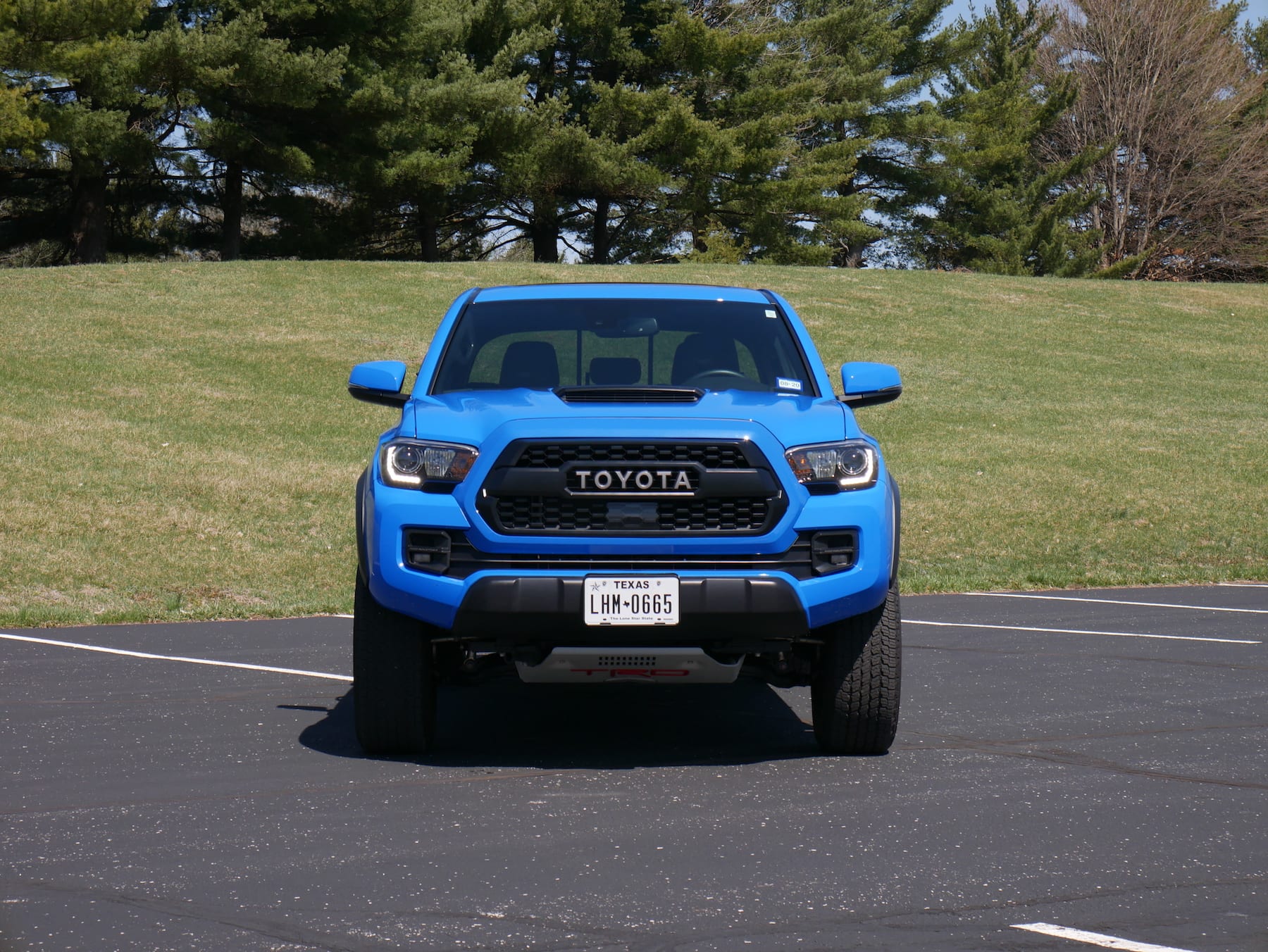 Toyota dropped a VooDoo Blue TRD Pro at my house for me to test out. When the guy pulled up, I cringed at the color. “I wasn’t expecting the blue,” I said. He nodded. “Nobody does.”

You can get the Tacoma in a wide variety of colors. The VooDoo Blue is the most outlandish. Most of the other ones make the truck look very attractive. I didn’t like the blue, which is only available on the TRD Pro, though there are two other colors (white and black).

From an exterior styling standpoint, the Taco is the best-looking midsizer out there. It’s muscular and masculine with a large front end and noticeable fender flares. It sits up tall and a big hood scoop gives it a little extra flair.

It has a large, six-sided mesh grille up front. Something I could have done without was the TRD Pro badging all over that really stands out in bright red—as if the VooDoo Blue wasn’t obnoxious enough. 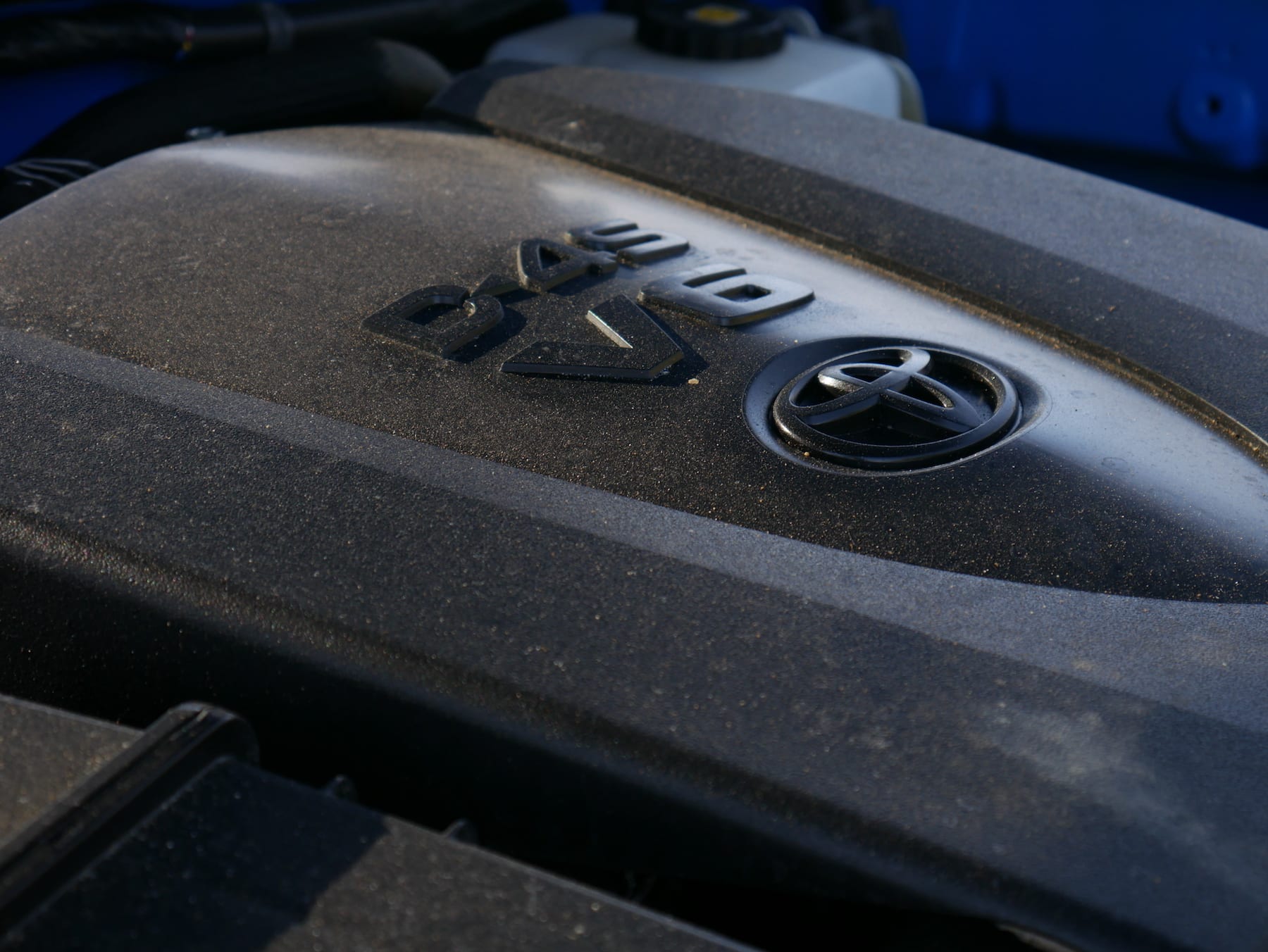 The TRD Pro, which is the model I drove, can only be had with the V6 but you have the choice of an automatic transmission or a manual. The V6 is a good choice, and it’s really no loss to not be able to get the four-cylinder in this trim. Obviously, the TRD Pro comes with four-wheel drive.

Even the most basic version of the truck will offer decent performance and plenty of capability for most people. If you plan on doing much hauling or towing, though, get the V6. The extra grunt makes it possible to really utilize the bed and sturdy body-on-frame construction.

As you climb the trim ladder, you get more and more capability. The TRD Pro is the top-level off-roader. It features a long list of off-road equipment that’s not included on other models. 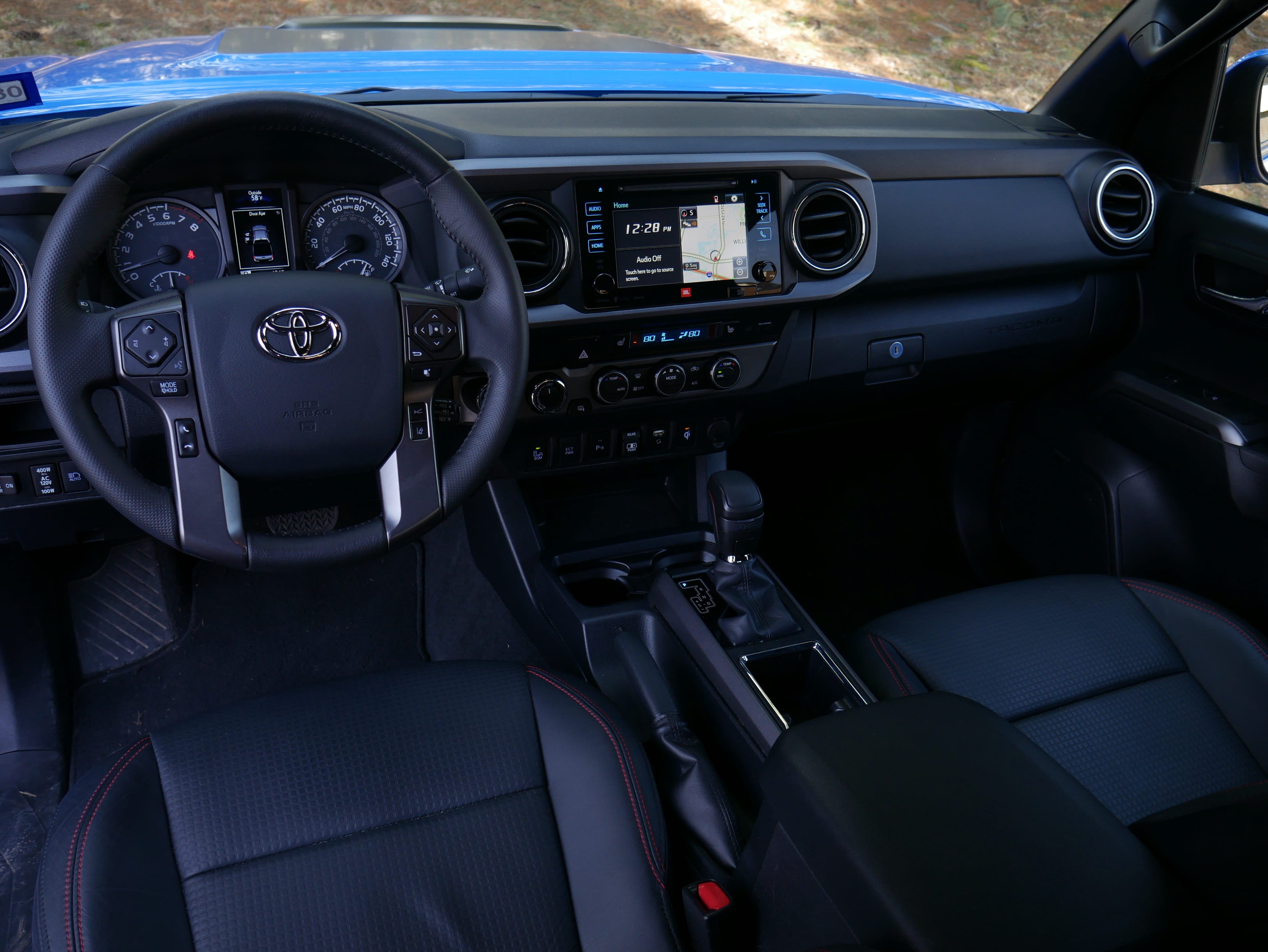 Inside, the Tacoma is nothing special. While its performance equipment and its exterior—especially in the TRD Pro version of the truck—are top-notch, the interior looks like it came from a five-year-old or so model. The design for this generation of the pickup only debuted in 2015, so this shouldn’t come as too big of a surprise.

It’s a simple interior with far too many surfaces covered in plastic. The Tacoma feels sturdy on the inside, and the plastics of reasonably high quality. However, with the TRD Pro being one of the top trim levels, it’s a letdown to see so much of it.

The plastic surfaces should be easy to clean, and that’s important in an off-road truck. Still, I want to see some more soft-touch rubber or real metal or wood throughout the cabin. The plastics cheapen an already dated looking cabin. 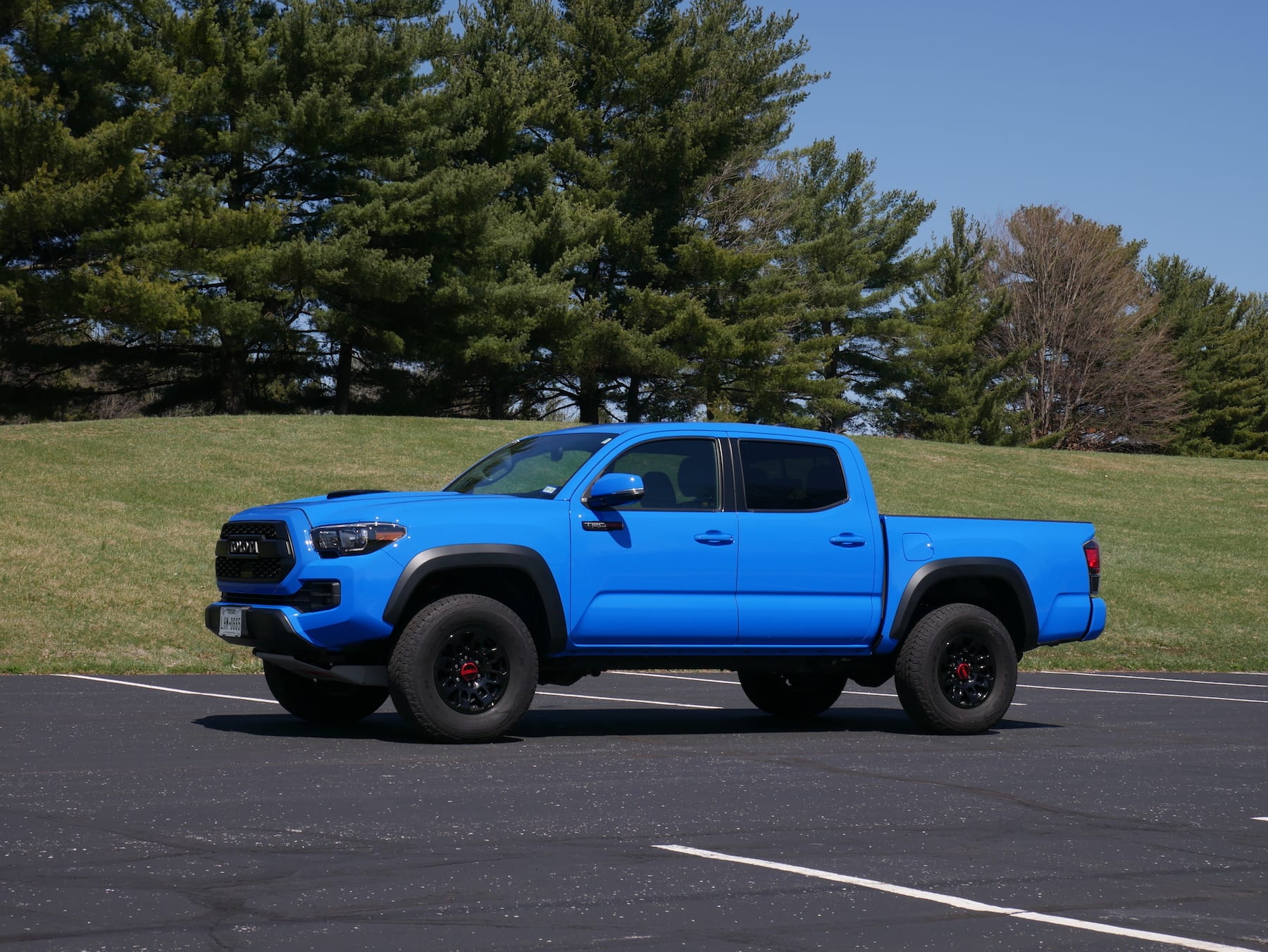 As far as midsize trucks go, the Tacoma lands near the top of the heap in terms of overall size. Its exterior measures a little over 212 inches (about 17 and ½ feet) in length and just slightly over 74 inches (just over six feet) wide.

These measurements are almost identical to the Chevrolet Colorado and the GMC Canyon. The Ford Ranger and Honda Ridgeline manage to be a couple of inches shorter, though the width is about the same.

Feels Big on the Road 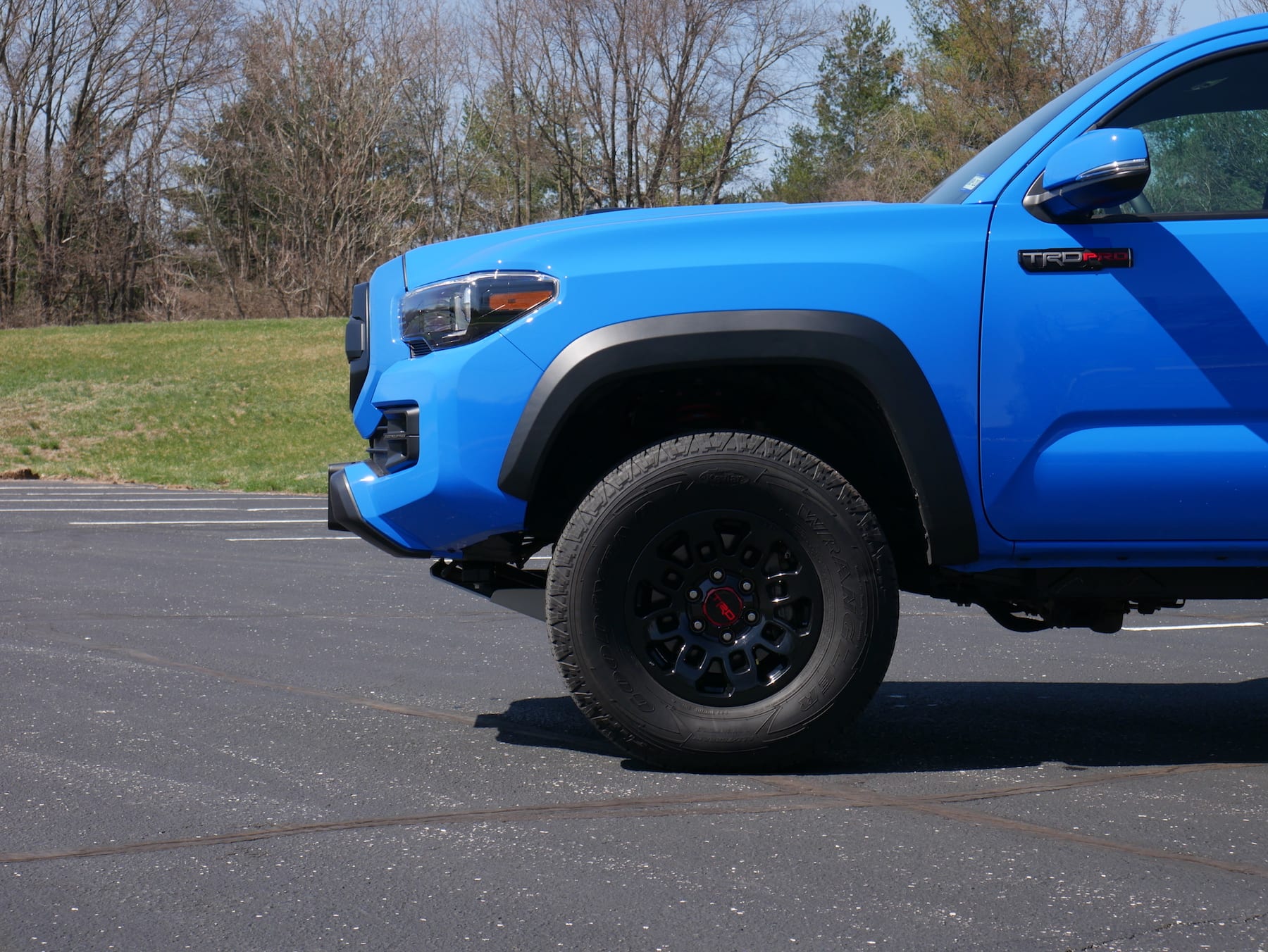 I’ve driven all of the midsize trucks on sale today. The Tacoma feels the biggest. Maybe it’s the heavy steering or the bulging hood scoop, but it just feels larger than the other midsizers out there.

Depending on who you are, this can be a good or bad thing. It’s a favorable trait on the highway but a pain around town. I assume you’d get used to it if you drove the vehicle longer than a week, but I’d rather own a truck that feels smaller, lighter, and more maneuverable. If I want a truck to feel big, I’ll just buy a full-size pickup.

Tighter Inside the Cabin 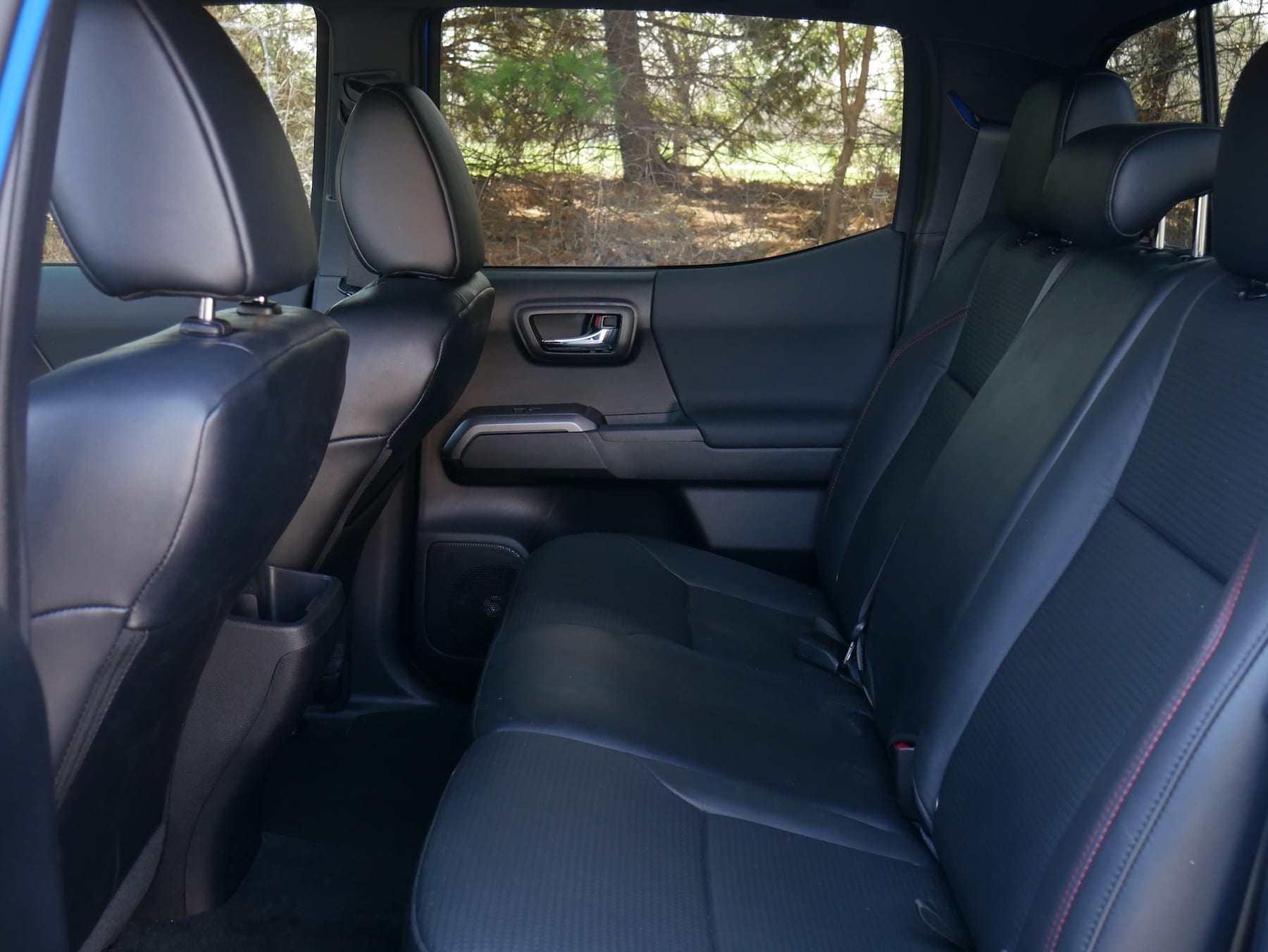 The Tacoma’s larger exterior and large-on-the-road feel beguile you into thinking the interior of the truck will feel big too. It doesn’t. That’s not to say it’s uncomfortable inside, it just doesn’t mesh with the rest of the truck.

When you compare the Tacoma’s interior volume, legroom, headroom, and hip room numbers with the competition, it matches most other vehicles within about an inch or two.

With that said, I found the rear seat headroom to be just barely adequate for myself. I’m 5-foot 8-inches tall. Anyone much taller than me will have to slump in their seat or find a way to get comfortable with their head brushing the roof liner.

The Tacoma isn’t the only midsize truck like this, but I noticed it more here than in some competing models. 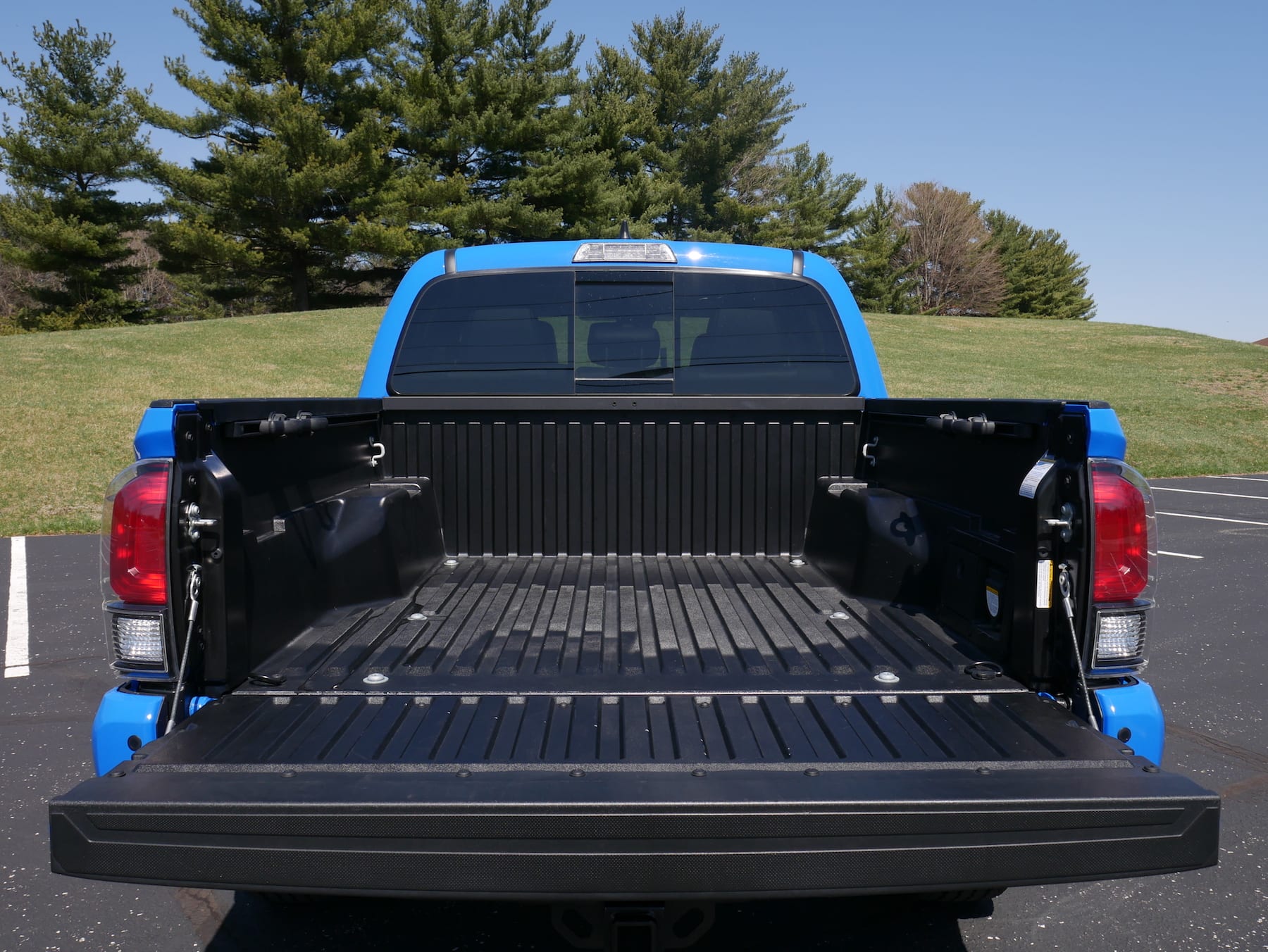 The Toyota TRD Pro definitely handles on-road duty well. The truck has plenty of power to tackle typical driving situations and handles better than you might expect an off-road focused truck to.

It still handles like a truck, though, so you’ll have to take twisty roads with more caution than you would in a car or crossover. Steering is heavy and there’s plenty of body roll. Imperfections in the road mike the truck buck a little bit if they come in the middle of a corner, and the leverage afforded by the chunky feeling steering wheel is most advantageous at lower speeds.

The TRD Pro model is rated at 1,175 for payload capacity and 6,400 towing capacity. That’s not segment-leading, but it’s still more than most people will ever need.

The truck has the goods to handle some extreme off-road situations, too. I didn’t get into any rock-laden off-road trails, but the dirt roads I was able to find posed no problems whatsoever.

I’ve driven previous model year Tacoma TRD Pros on serious off-road courses and know what they’re capable of. This truck would absolutely murder off-road, and I’m ashamed to say I didn’t take full advantage of it.

With all that said, the TRD Pro’s price tag would make me think twice about doing anything seriously butt-clenching off-road. The truck is a pricey machine at $46,410. If you scrape a tree or dent a fender you’re going to want to cry, at least I would.

If you just want an off-road machine, you could go with the much cheaper Nissan Frontier Pro 4X. You’ll save about $12,000 and get a lot of the same equipment. 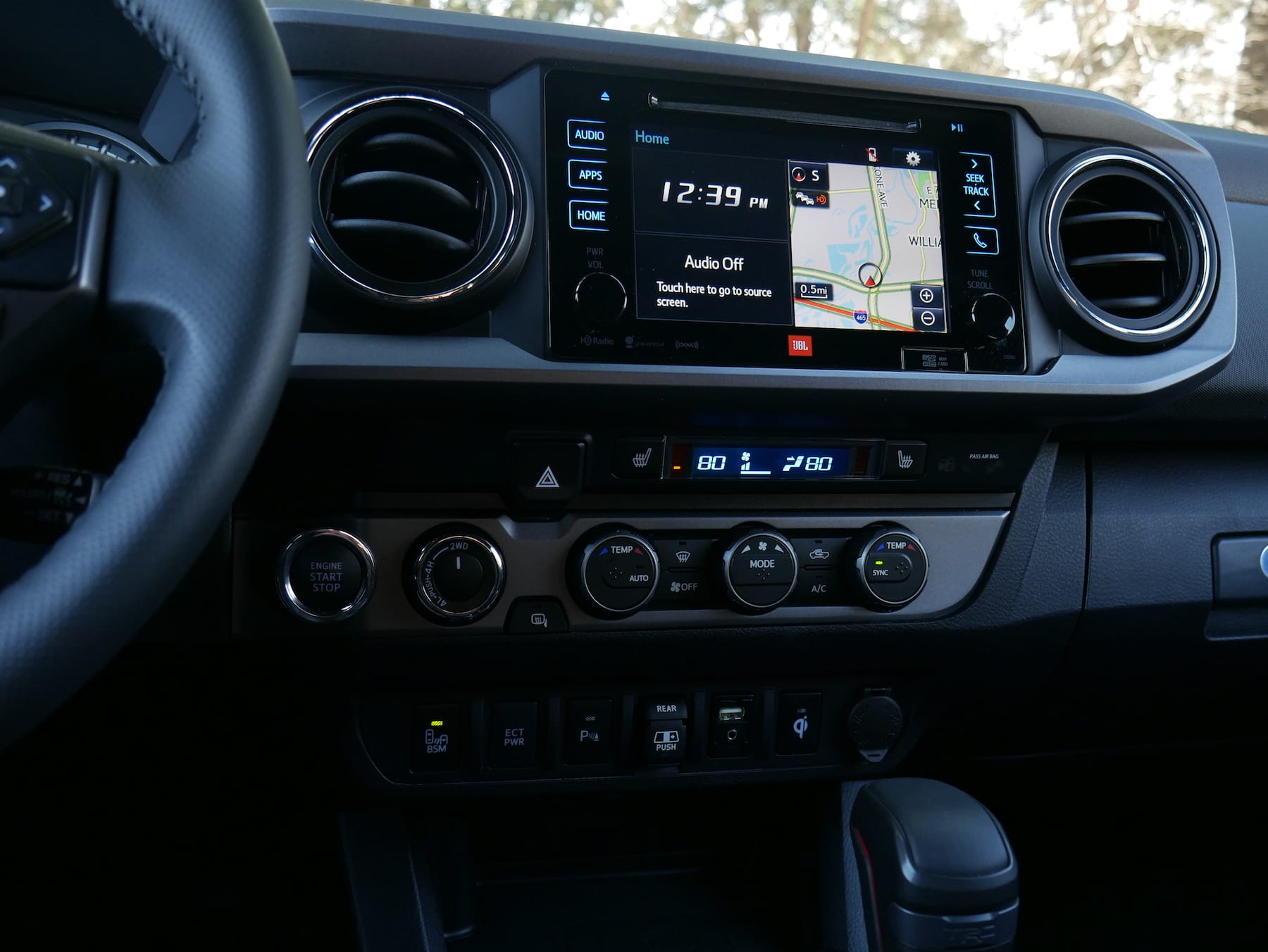 The cabin is the weak point. As I mentioned above, there could be more space, especially in the rear seat area, and materials could be improved considerably.

It’s a functional interior with good storage and a pretty simple layout. With that said, I like just about every other midsize cabin better with the exception of the Nissan Frontier.

Toyota’s infotainment system works well enough. It’s pretty quick to respond, but the Tacoma still lacks Apple CarPlay and Android Auto—two features that some competitors do offer. The 7-inch screen is large enough but the interface and graphics look dated when compared to Ford and GM’s systems.

Toyota needs to update its tech. It’s important to note this doesn’t mesh well with its higher price tag than the competition. 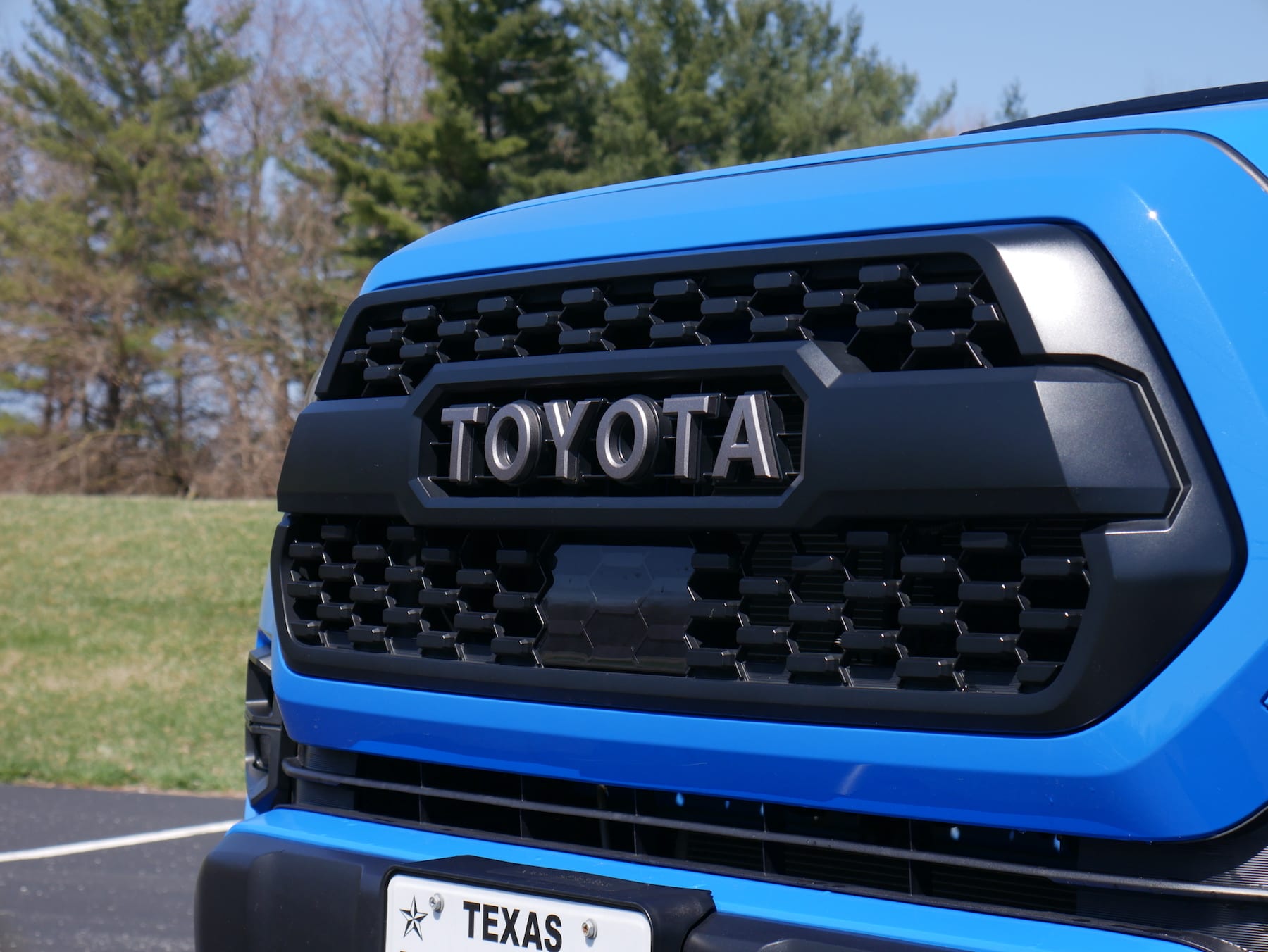 As I mentioned above, the Toyota Tacoma TRD Pro doesn’t come cheap. With a manual transmission, the Tacoma TRD Pro costs $42,965. Equipped as my tester was with an automatic transmission the Monroney sticker said the truck comes with a price tag of $45,365 before destination.

For a midsize pickup truck, that’s a lot of money, especially when you look at the competition’s off-road models. Nissan’s Frontier Pro 4X has an MSRP of $33,530 before the destination fee. The Chevrolet Colorado ZR2—which is the TRD Pro’s most formidable off-road competitor in the segment—comes with a price tag of $43,495 before destination.

If you just want an off-road-capable truck and don’t care about technology or aesthetics, I suggest the Nissan Frontier Pro 4X. It’s an exceptional value. Yes, it’s a dated truck with an ugly interior, but Nissan has a tested design that it has sold for well over a decade. It comes with a quality 4×4 system, locking differentials, skid plates, and reasonably powerful 4.0-liter V6.

If you want something more modern than the Frontier with fantastic off-road capability, the Colorado ZR2 is a good choice. It’s a little less money than the Tacoma, offers a better infotainment system, roughly the same overall size, a diesel engine option, and some serious off-road equipment, including Multimatic Dynamic Suspension Spool Valve damper technology—a segment-first.

So, what justifies the Taco’s grande price tag? Toyota has a long history with the Tacoma. It has loyal fans, and the vehicle seems to run forever with many owners racking up hundreds of thousands of miles with few issues. Tacoma’s hold their value well, too. All of this plays a role in its high price tag.

It’s not an outrageously priced machine, just a little more expensive. If you buy one, you’ll have made a good decision. However, the fact that you can get a truck with similar or better equipment for less money should make you think twice about buying the Toyota. 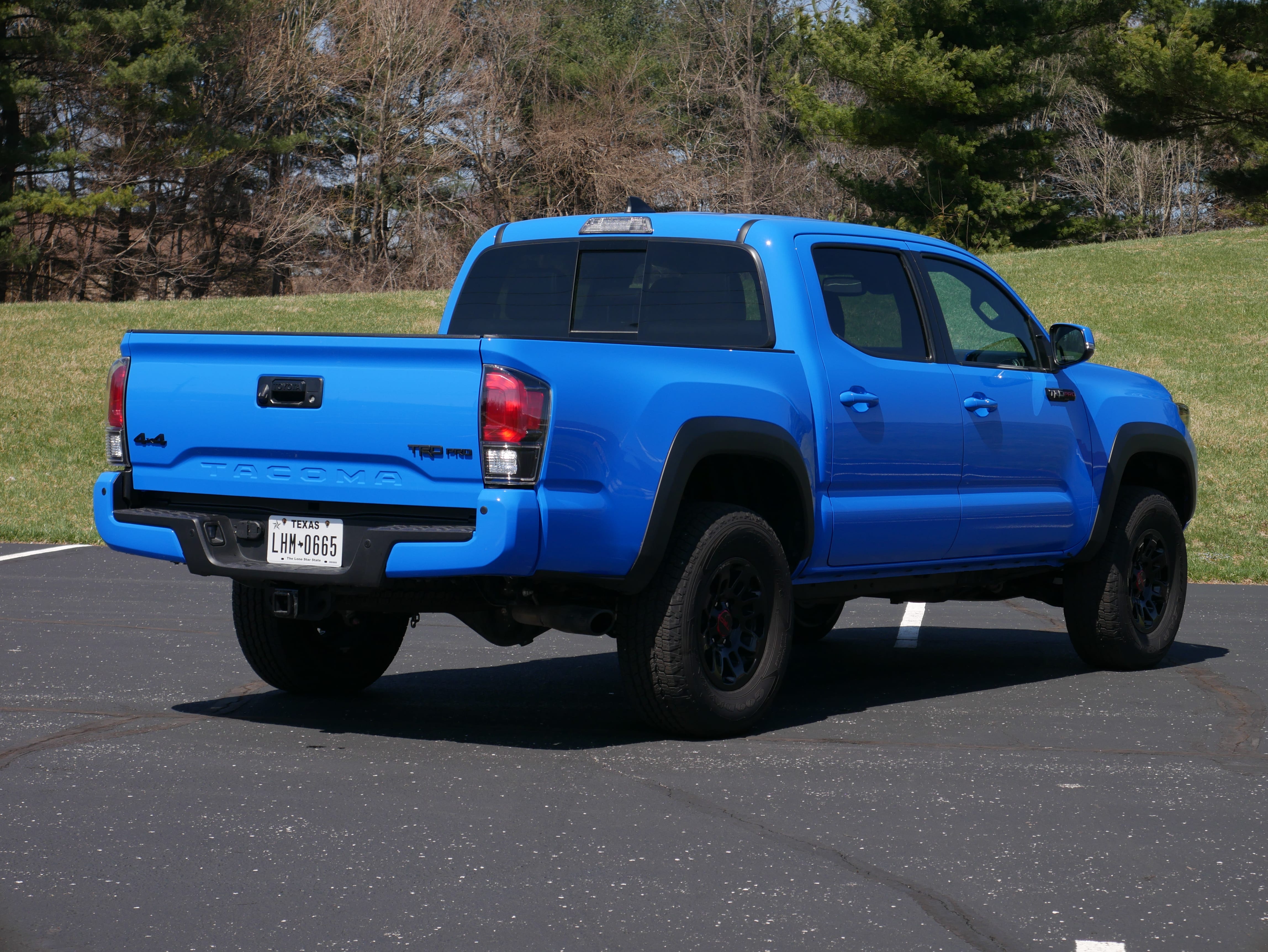 The Toyota Tacoma is the best it’s ever been. If you’re a Toyota fan who wants a good truck that you can actually fit in your garage, then you’ll be pleased with it. The TRD Pro version gives you all of the off-road capability you could ever need if you’re willing to pay for it.

The Tacoma is a strong entrant into the midsize truck segment, but it’s not the best. It lacks the handsome and modern interior design, top-notch materials, and up-to-date technology that some of its competitors have.

It also comes with a higher price tag than its competitors, this is especially true of the TRD Pro model. While Tacoma’s history of reliability and strong resale value help justify the price, there are other trucks out there worth considering.

Note: Toyota USA provided the test car for the purposes of this review.