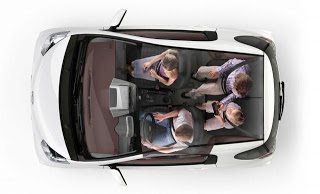 Toyota set out on a mission to build a four-passenger car with an exterior length of less than three metres. The result, as we know, is the iQ. Now Toyota is going to let us see through the roof into the cabin in order to better understand the space arrangement.

The fact is, Toyota isn’t positioning this as a competitor to the Camry or even the tiny sedans American and Chinese consumers are beginning to swoop up. However, the iQ does something the smart fortwo can’t – and that is simply offering a rear passenger compartment.

For more on the iQ click here
How did they do it? A new differential helped create a smaller engine bay and cut out extra space between the front bumper and the accelerator. A flat fuel tank under the floor was a huge difference maker. The asymmetrical dashboard is possible because of a tiny but apparently no-less efficient A/C unit. The front seats are super-thin, carving out an extra 40mm of space for rear passengers compared with normal seats.