TOYOTA FT-86 TO BE NAMED CELICA; BEST DRIFTING PRODUCTION CAR IN THE WORLD?

Laudable quotes are a rare find in the automotive world. Listening to many car company CEOs repeat an endless blather of talking points received from a handful of engineers (after a pre-screening from lawyers and accountants) isn’t all that fun.

Then there’s the chief engineer for the new Toyota FT-86, a car that may reach our shores as the Celica when production rolls around in 2012. Tetsuya Tada, Motor Trend reports, says “Drifting and sliding the tail is the most important thing”. Most….. important…. thing. If the car isn’t fun surely Tetsuya-san must still be worth a blast around Mount Fuji.
See, the FT-86 boss was talking about a few of the important decisions made on this future rear-wheel drive coupe. Grabbing a horizontally-opposed boxer four-cylinder from Subaru will be a great start. Boxer engines sit low, bringing the centre of gravity down. Viewing this car from the front is misleading – the profile view showcases its diminutive size, a boon for low weight seekers and quick transitions when driving hard.The six-speed manual tranny is mounted behind the engine to aid weight distribution; the kind of distribution primed for drifting. And this from a production Toyota in the 21st century?
Toyota’s Tada suggests the FT-86/Celica will be the best car to set up for drifting. Well, he doesn’t suggest; he implicitly states.”… and this car will be the best in the world for that”, is the ending to the quote in paragraph two. Tetsuya Tada also says the car’s steering will react “instantly” and that feeling is something to be enjoyed during routine driving.
Now Toyota and Honda, who’ve both gradually ground themselves (and us) into boredom, will soon be producing hot cars. Check out the Honda CR-Z here. 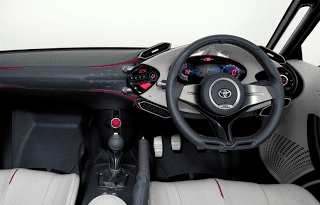