Wolfville is a small Nova Scotian town built around one of Canada’s best universities near the shores of the Bay of Fundy. Acadia U is a picturesque university that significantly adds to the town’s population. Apart from the typical 18-22 year old crowd, there is also a number of children in Wolfville. (They seem to be present in most towns, these children.)

And, after a by-law is passed Monday by Wolfville’s town council, smoking in the presence of children while in your car will be illegal. Wolfville will become the first place in Canada to enact such a law. The mayor doesn’t see this as a money-making, prosecutorial kind of by-law. It’s part of an effort to raise health awareness. All seven councillors have already voiced their support and the Municapal Gov’t Act allows municapalities to pass laws aimed at protecting its citizens. Mayor Bob Stead said there is plenty of support in the community to stop adults from smoking with kids nearby, and vehicles are one area where the problem is visible. 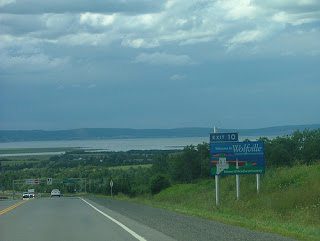 Twice the number of respondents in a Chronicle-Herald poll said the law was responsible rather than intrusive, while the remaining 24% were split between a possible waste of money and the fact that the law may not go far enough.