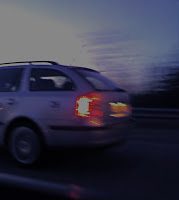 To make this story as multicultural as possible, let’s start from the beginning. The Good Car Girl’s cousin and his wife are cruising around the west coast of Mexico. (Do you smell jealousy?) Along with another couple of our friends, these folks needed a little security and animal care. No problem.

Mind, this security and pet care takes place in a city that’s relatively inundated with advertising for a car no resident can buy. In fact, not only can no citizen of Halifax, Nova Scotia purchase a new Skoda, but Volkswagen’s Czech underling can’t be had by anybody in all of Canada. Or the United States.
Follow this link up on in here for all Skoda-related posts from GoodCarBadCar
See, Skoda is the premiere sponsor for IIHF events. The International Ice Hockey Federation is holding the men’s world championship in Canada for the first time ever. Skoda and the IIHF are basically two peas in a pod, and despite curious onlookers figuring that it would be prudent for the parent company to take over the bottom right slot of billboards; the local TV commercial ticket sales advertising; and the presence of automobiles at the event which begins in early May, Skoda is running with it. 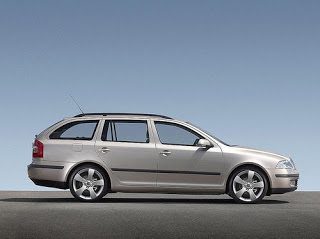 The Halifax Regional Municipality is home to a couple hundred days of fog each year, one of the continent’s most impressive fortresses (Citadel Hill); the current face of the National Hockey League (Sidney Crosby), Oscar-nominated actress Ellen Page; Grammy-winning musician Sarah McLachlan; and an incredibly successful IIHF world junior tournament and women’s world championship in former years, appears to also be the new home of a Skoda Octavia wagon.

This shouldn’t be too surprising to marketing experts but still managed to catch me off guard as we drove to the suburbs of the city to care for three cats, all of whom cause terrible allergies in The Good Car Guy. A post like this may stun the European readers, but the silver be-decaled Octavia in these pictures is a first for Haligonians. In fact, it’d be a first for most North Americans.
For Skoda background, follow this link to a thorough Across The Pond article from GoodCarBadCar. The Octavia is a Volkswagen Golf/Rabbit-based vehicle that sells to an ever-growing portion of the marketplace which doesn’t care what the Skoda badge used to indicate about your taste or income. 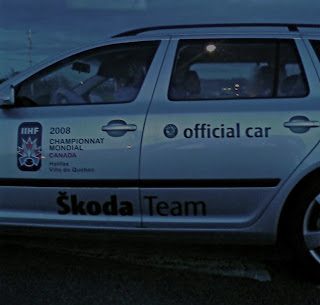 Apart from the manufacturer’s photo, the others (along with the video seen below) are live-on-Halifax-roads pics taken from a cell-phone camera captured at dusk on a cloudy Sunday evening.
Consider them spy photos, representative of a ‘scoop’ that GoodCarBadCar first landed about a future for Skoda in North America. Whisper it.