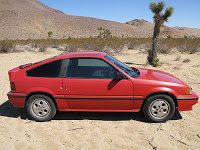 It seems that growing up in a country where Honda is a major player is an equivalent way of saying that you have spent some time in a Civic or two or ten. The Honda Civic is now the company’s second least expensive model and peddles its wares successfully on the basis of being a perennial best-seller in Canada, a holder of value in the long-term, and a possessor of a lofty reputation as reliable yet fun transportation.

Due to these factors, young Canadians (and Americans), whether driving or being driven, have only lived in a time when Civics were an obvious choice for their parents, fri

ends, or themselves. In other words, I have been in the passenger or driver seat of more Honda Civics than I can count. Beige, late 80’s 4-door with a 5-speed manual that the owner said had lots of get-up-and-go in third gear. Red, late 80’s CRX (it’s plenty Civic) that refused to die but kept coming back for more despite the young owner’s torture. Purplish mid-90’s Civic coupe that was always being talked about in a way that made me think it would be modified, but was never touched by any speed shop in the way that thousands of other Civics were.

More recent Civics have seen me take up residence in front of the steering wheel more than the older generations. Automatics and manual; hatchback Si or 4-door sedan; well-equipped or slightly less well-equipped.

The list could go on, but, this article is actually about the most recent Civic. You know the one. The windshield is raked back daringly. The trunk looks small but isn’t. The wheels better fill the wheel arches. Headlights are narrow slits and the car as a whole looks distinctly more modern than previous iterations, however handsome they may be with 19 inch wheels, a lower front air dam and side skirts.

If you are car shopping, there’s a good chance you have thought about buying one, bought one, or at least peeked in the Civic parked in the spot next to you at the grocery store when you noticed in your periphery that the interior was strikingly unique. Honda calls the two-tier instrument panel ‘space-aged cool and super functional’. I don’t know what NASA’s Discovery shuttle has for an instrument panel, so I can’t back up the claim of space-aged coolness, but I do know that Honda decided to take a touch of a risk in our somewhat conservative North American automotive market.

You could say the emperor has new clothes, but it goes beyond new clothes. More powerful engines, more features, more control once on the move, and more comfort. Critics decried the move away from a front wishbone suspension on the previous generation and some are apparently scared off by less ordinary styling on this generation. North American consumers, however, gobble up Honda Civics like quarter-chicken-white-meat-with-fries-and-dipping-sauce.

Why? For the little things and the big things. The wheelbase of a current 4-door Civic is within 20mm of an early 90’s Accord. Yet the car as a whole is about 20cm shorter from bumper-to-bumper. This means a shape that is tidier overall, more easily maneuvarable, yet spacious inside. The new Civic, always Honda’s small car, is now wider than the Accord was in 1992. Its 4-cylinder engine is around 400cc smaller, yet produces as much, or more, horsepower than that Accord. Compared with 2005 Civics, the latest Honda enters the game with a couple dozen extra horses under the hood while achieving the same highway mileage. 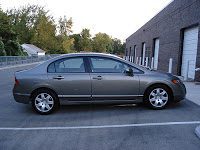 ir new vehicles with competitors – but even more so with the previous incarnation. Step out of a previous-gen Civic and into the new edition and you will notice the interior and exterior styling differences right off the bat. Typically Honda-like, the controls reside where you want them, everything feels as though it will stay glued, welded, or hinged together, and visibility is decent all around. Soichiro Honda was the company’s detail-oriented founder, and when you grab hold of a steering wheel that has a proper circumference and feels good in the hands you realize the fruit of his labour. Doors thunk nicely, gauges are perfectly legible (and you become transfixed by the digits on the upper tier), the seats hold driver and passenger firmly in place.

I drove a DX sedan and came to a few conclusions. 140 horsepower is more than 117, and the trademark VTEC kick – now i-VTEC – was subtle but welcome in the upper reaches of the tachometer. The shifter was excellent, although the clutch did not have quite enough travel and was a little difficult to master quickly. The driving experience as a whole was not significantly different from the former generation of Civics, but the differences are easily defined. Better high-speed stability, flatter cornering, a more mature-feeling car that is also more fun, and the detectable power increase.

It comes as no surprise to anyone when they read positive comments regarding a new Honda. When the neighbour, cousin, friend, and co-worker all drive a Civic, you had already figured there were reasons.