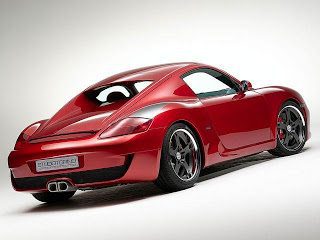 Is the regular Porsche Cayman tired, dated, or dowdy? I hope you’ve not tired of Porsche’s all-rounder, but…. if you want your Islands (or car) a little spicier, Ruf and Studio Torino did one up just for you. Take note, if you were under the impression that the recent Part I and Part II of the mid-engined sports car profiles were a backhanded bash of the formula…. you were wrong.

The RK Coupe is more than just a design masterpiece. Every Cayman driver seems to believe that the mid-engined Boxster coupe could handle a LOT more power. Ruf supplies. The 3.8L motor normally found in the 911 S has been supercharged to 440 horsepower. Only 49 of these cars will be built, and they’ll be mighty expensive. Figure 911 Turbo money.

Those 49 owners have a tasteful & classy but also aggressive & distinctive body on top of an even more capable Cayman, tuned by one of the world’s most revered Porsche tuners.