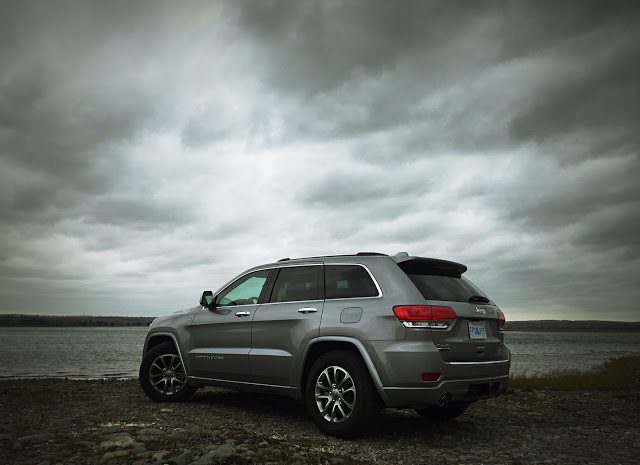 Which one doesn’t belong?

Think of it this way: every SUV/crossover on sale in North America which consumes less fuel than the 2015 Jeep Grand Cherokee EcoDiesel also tows a much lighter trailer and, in all but two cases, generates far less torque.

WHAT IS IT?
Jeep began marketing the first-generation Grand Cherokee nearly a quarter-century ago. The current model, the fourth iteration in a long line of popular vehicles, debuted for the 2011 model year. 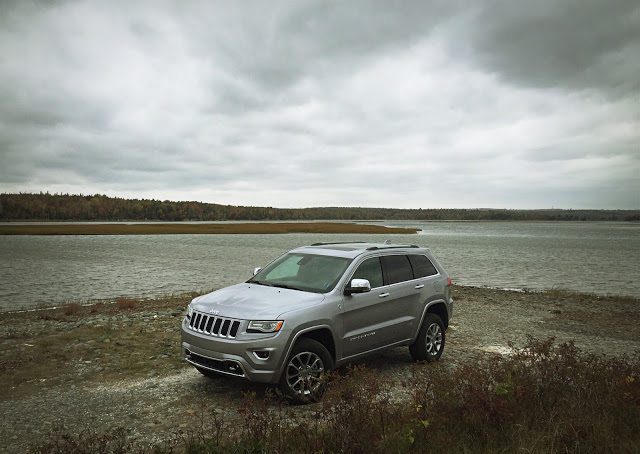 Though eminently capable off the beaten path, the Grand Cherokee isn’t a pickup-truck-based, body-on-frame sport-utility vehicle.

As a remnant of the former DaimlerChrysler era, the Grand Cherokee and its Dodge Durango sibling are based on Mercedes-Benz’s unibody M-Class, which is now called the GLE.

Grand Cherokee pricing kicks off below $45,000 as a Laredo with Fiat Chrysler’s oft-used 3.6L Pentastar V6.

Optional on the Grand Cherokee Limited is a 5.7L V8 with 24% more horsepower.

On the Grand Cherokee Overland and Grand Cherokee Summit, there’s another optional engine: this 3.0L turbocharged V6 diesel also seen under the hood of the light-duty Ram 1500.

The engine is built by VM Motori, which was initially contracted to build the powerplant for General Motors.

HOW BIG IS IT?
The Jeep Grand Cherokee does many, many things very, very well. One of those things is not space utilization.

Consider, for comparison, North America’s top-selling utility vehicle, the Honda CR-V. The Grand Cherokee is 10.4 inches longer than the CR-V, bumper-to-bumper, and 4.9 inches broader across the gut.

But the Grand Cherokee offers only 1% more volume for passengers, less than half an inch more rear legroom, 2% less cargo volume behind the second row, and 4% less total cargo volume.

The 2015 Grand Cherokee is right-sized outside: not so vast that it’s a pain to park, but large enough that you think it’ll be vast inside. In reality, the Grand Cherokee’s cabin is only just spacious enough.

DOES IT WORK?
Jeeps, particularly the iconic Wrangler and this Grand Cherokee, are known for their off-road prowess. But while the Wrangler completes its off-road tasks with straightforward mechanics, the Grand Cherokee Overland utilizes five suspension heights (including two lofty off-road perches), plus a Selec-Terrain traction system which reconfigures the powertrain into snow, sand, mud, rock, and auto modes.

With impressive approach and departure angles, the Grand Cherokee is much more than winter-friendly. It’s the kind of SUV you drive through a ditch, down a steep bank, onto a salt marsh, pose for a picture, and then exit the same way without a second thought. Ask us how we know. 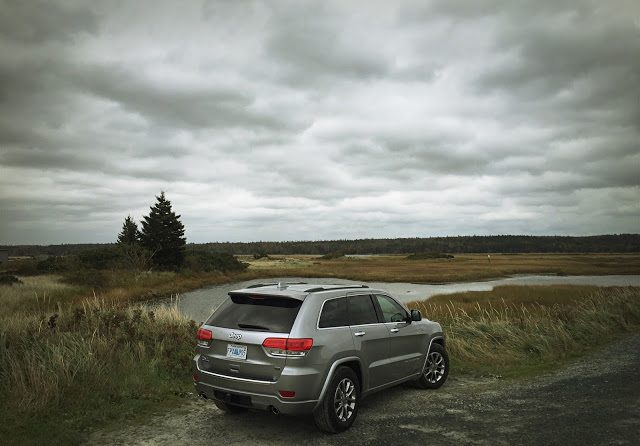 Then, with your favourite low-tide-only off-road route complete, you immediately arrive on some of your neighbourhood’s best paved roads. The Grand Cherokee’s air suspension hunkers down, the steering provides the kind of feedback missing from many a good sports sedan, and 420 lb-ft of torque propels you past slow-moving tourists like they’re sitting still.

The road gets rough along the coast, but the Grand Cherokee completely hides the fact that the Department of Transportation & Infrastructure Renewal isn’t a big believer in the “renewal” part of its name.

All the while, you’re ensconced in a genuinely luxurious cabin. The seats could be much more supportive, the return-to-centre shifter is an unnecessary gimmick, and some of the switches feel low-rent in discounted $20,000 Chrysler 200s. But the overriding sense is of genuine premium status, a sense fostered in large part by the blissful absence of wind and road noise.

Sadly, although the 3.0L, 240-horsepower V6 diesel is impressively refined in Ram’s pickup truck, there’s far too much audible clatter making its way into the Grand Cherokee’s cabin at inopportune times. The sensation is made worse by the buzziness which meanders up the A-pillars and across the headliner and through the front passenger seat when accelerating through the middle of the rev range. 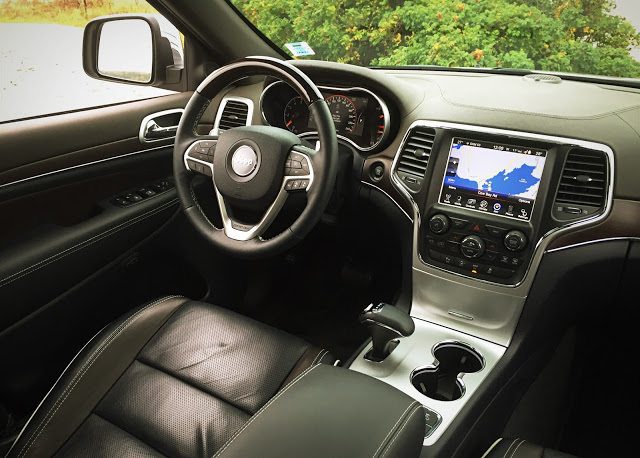 Not enough sound deadening material under the hood? Insufficient rubber bushings in a specific location? This Grand Cherokee isn’t fresh from the factory; it’s made more calls to more media outlets than Donald Trump the morning after a Republican debate. Regardless of the reason for the poor NVH work, the atmosphere would be unacceptable in a $30K family crossover, much less a $72,000 luxury SUV.

The fuel economy is undeniably impressive for a vehicle of this size generating this much power. Fuel economy, however, can’t be the only reason you’re dropping more than sixty large on an SUV. Get the Hemi.

IS ANYONE BUYING IT?
In Canada, Grand Cherokee volume has increased in each of the last five years – climbing 149% between 2009 and 2014 – but are down 9% in 2015. The Jeep is Canada’s 16th-best-selling SUV/crossover overall and accounts for 14% of the brand’s Canadian volume. Only the Cherokee and Wrangler sell more often for the Jeep brand.

In the United States, the Grand Cherokee is on track to post its highest sales since 2005. Only eight SUV and crossovers, including Jeep’s own seventh and eighth-ranked Cherokee and Wrangler, sell more often than the Jeep flagship. Grand Cherokee sales are up 4% in 2015; the SUV/crossover sector is up 14%. 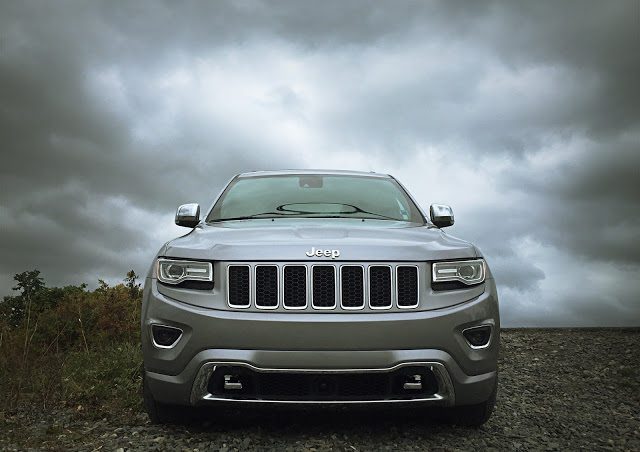 SHOULD I BUY SOMETHING ELSE INSTEAD?
Due in part to the Grand Cherokee’s ability to reach across the aisle from mainstream to luxury and back, there are countless options. Moreover, the Grand Cherokee excels on and way from pavement, making it a contender for SUV buyers of very different stripes.

At this price point, the Grand Cherokee is in the realm of similarly luxurious and much larger SUVs like the GMC Yukon, roomy Germans like the BMW X5 and snug Germans like the Porsche Macan, and luxury offroaders like the Land Rover LR4 and Lexus GX460.

Those are only some of the potential rivals. Few, if any, will match the Grand Cherokee’s blend of on-road performance and off-road dominance. 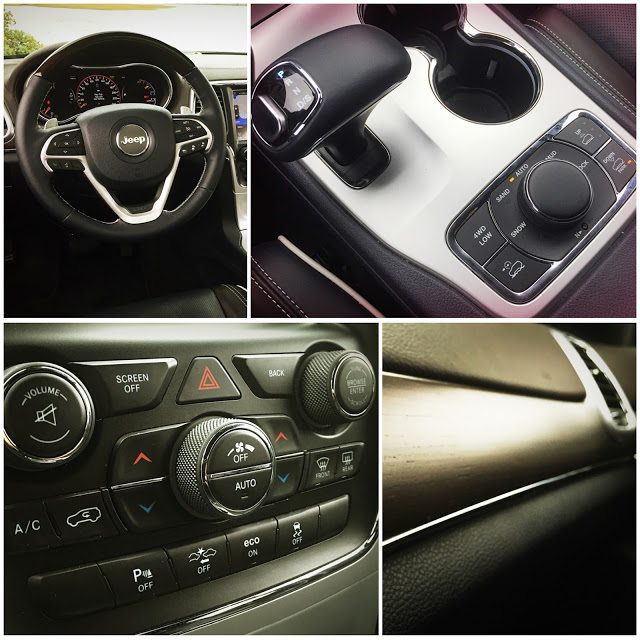 WHAT’S THE VERDICT?
It’s one thing to experience a modest amount of good ol’ fashion diesel clatter in a $70,000 pickup truck. It’s a whole ‘nuther matter when there’s significantly more noise, more vibration, and more harshness emanating from the front of the vehicle in a $72,000 luxury SUV.

Assign the Ram’s NVH engineers to the Grand Cherokee EcoDiesel project and the result may well be different. With more than 14,000 kilometres on the odometer, it’s clear that this 2015 Jeep Grand Cherokee EcoDiesel Overland had lived enough life to generate too many buzzes in the headliner, too many squeaks in the passenger seat, and too much vibration in the door inserts.

Even with the 3.0L diesel, the Grand Cherokee still ranks as one of the best SUVs on the market today, so great is its range of capability both on and off road. But this is not the best Grand Cherokee.

Timothy Cain is the founder of GoodCarBadCar.net, which obsesses over the free and frequent publication of U.S. and Canadian auto sales figures. Follow on Twitter @goodcarbadcar and on Facebook. The Grand Cherokee was supplied by FCA Canada’s press office.