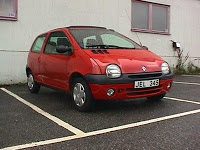 In the pantheon of famous small Renaults, beneath the Megane and Clio sits the Twingo. RenaultSport versions of the Megane are much loved, most specifically the F1 Team R26. As far as the little Clio goes, the current 197 doesn’t have the emotional pull of the previous-generation 182, but that makes it sound like an undesirable car. Which it is not.

The little-bitty Twingo wasn’t received as well as Renault would have hoped; especially in terms of critical praise from the UK press. Said evo regarding the 99-bhp Twingo GT: “It doesn’t help that the Twingo is nothing like as distinctive to look at as the original was….. Ah well. At least the Twingo GT is cheap at £9995, and thus far it does seem to ride a lot better than the otherwise splendid Fiat Panda 100HP…. we haven’t really given the Twingo a chance to shine. It’s been motorway and heavy traffic, which might be the way of too much of the modern world but is no help to us.”
Now there’s a more interesting Twingo. The RenaultSport version – at least on paper – seems much more interesting. 133 horsepower and 118 lb-ft of torque aid its cause. The engine is a 1.6L naturally aspirated mill that produces peak power high in the rev range, as you’d expect from a small 4-cylinder in a small car. Wheel diameter is slightly concering at first – its 17″ size sounds like it could have a negative affect on ride and steering. Lucky are we, then, that the tire width is is just 195. Stability control can be deactivated and much of the braking system comes from the bigger Megane and much larger Laguna.
Renault will offer a ‘Cup’ chassis from the Twingo RS’s inception. Cup, in Renault lingo, is tres bien. Lower, stiffer, tighter. British buyers will tick that box almost every time. (The prior generation Twingo, pictured, was left-hand drive only, suffocating British love.) In fact, Great Britain will take a third of Twingo RS sales. France, Spain, Italy, Germany, and Switzerland will account for more than half. The Twingo RS gallery is below.