Frankfurt is home to a major automobile show which is held every two years. In case you were unaware, Frankfurt is a 660,000-people city in Germany. Again, if you didn’t know, Germany is home to many of the world’s foremost luxury automakers. (Check the GoodCarBadCar Auto Olympics to learn more.) Mercedes-Benz, BMW, and Audi are all German companies, in addition to Porsche and Volkswagen.

And while the Germans create ever shrinking niches and gaps to fill in the marketplace, French automaker Renault introduced a traditionally beautiful coupe at the Frankfurt Auto Show. Despite Mercedes invention of the “4-door coupe” and BMW’s showing of the first “sports activity coupe”, it is the historically great promoter of the niche product that maintained some level of normality in their coupe introduction.

The Laguna is Renault’s midsize family car. Competing with the likes of Ford’s Mondeo and the Opel Vectra, the Laguna must work hard to carve out its own place in the crowded sector. A coupe will add some prestige to the model lineup; even to the Laguna 5-door hatch. Famed Renault designer Patrick le Quement had always hoped that the gorgeous Fluence concept from a few years back would inspire Renault design in the future. The new Laguna coupe is beautiful and pretty in a traditional sort of way, while being distinctly modern and very Renault. Consider the design a success.

Propelled by a very powerful V6 diesel (that will likely be shared with Nissan’s North American Maxima in the future), the Renault should move along with some sprightliness, too. Will Europeans take to a torquey front-wheel drive coupe when 4-cylinder BMW 3-series’ are readily available and strong-of-badge? Hard to say. But the Laguna coupe cuts a dashing figure. 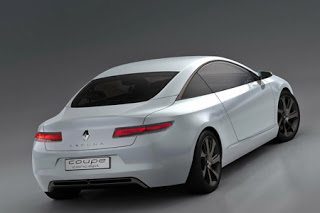