Long before the term “blog” was invented and the internet had sprung up as the automotive enthusiast’s favourite tool, the domestic automobile sector was known to struggle. What’s new? With your current daily dose of auto news, test drives, and opinion; the American automakers (General Motors, Ford Motor Company, Chrysler LLC) are yet again suffering from o’erwhelming maladies.

Fuel prices are rising, just one factor that’s driving consumers away from SUVs and trucks. SUVs and trucks are the vehicles by which the American manufacturers made hay over the last 15-20 years. The mortgage crisis possesses long-lasting effects; another reason that the auto market, as a whole, is dwindling. Besides the theorizing, statistics show that, at least in the month of May, the four best-selling vehicles in America wore the badges of Japanese car companies. Alarm. Bells. Ringing.
Is the story new? Yes, it’s brand new. Does it reek of 1981? For sure. Not that I would know, being, shall we say…. nonexistent.
However, the recent publishing of Ronald Reagan’s diaries (The Reagan Diaries – Edited by Douglas Brinkley – HarperCollins) reveals the former president’s feelings about the struggles of America’s own automobile companies in the early 80’s. From Thursday, March 19/1981:
“The auto task force met with Cabinet – still some disagreement about any quotas on Japanese imports. Some even with regard to a Japanese voluntary cutback. The V.P. summed it up nicely. He said we’re all for free enterprise but would any of us find fault if Japan announced without any request from us that they were going to reduce their export of autos to America?
There was no dissent. I told them I’d heard enough I would make a decision. Privately I told Al Haig (Secretary of State) to call Amb. Mike Mansfield (Japan) and have Mike advise “Ito” before his visit that we were threatened by a bill in Cong. to set a quota. An announcement by Japan of a voluntary cutback could head that off. We’ll see what happens. 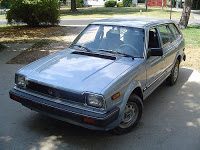 Al then told me he felt he was being undercut by other agencies etc. I worry that he has something of a complex about this. Anyway I’ve arranged that he & I meet privately 3x a week.”
From Friday, December 18th/1981:
“Most important meeting with heads of Auto Co’s. That industry is facing total disaster. I’m recommending that we tell Japan we are going to impose same restrictions on their exports as they do on import of Am. cars in Japan. Auto makers need passage of Clean Air Act changes which can reduce price of Am. cars.”
From Tuesday, August 10/1982:
“Met with Chryslers Lee Iacocca. He’s all for our program and wants to help. He has reduced Chryslers cost of production 50%. No wonder they show a profit.”
From Sunday, January 16/1983:
“Spent most of the day at desk, then at 6:30 guests arrived for a stag-bull session dinner. Geo. Shultz, Geo. Bush, Bryce Harlow, Lee Iacocca, Geo. Will and Irving Kristol. Most of the conversation centered around the auto industry. Lee discussed the Japanese problem & their restrictive trade practices, including under valuing the Yen. It was most informative & useful since we’ll be dealing with P.M. Nakasone Tues.”
From Wednesday, April 11/1984:
“Off to Kansas City to visit a Ford plant & speak to 2000 workers. I was warmly received inspite of the best efforts of the Auto workers union. To see I wouldn’t be. They are doing a remarkable job of making a worker management team at that plant which probably drives the Union leaders up the wall. “