Establishing a vehicle’s direct competition when each vehicle examined aims to portend a new automotive segment is difficult. The Infiniti FX35 and Acura ZDX aren’t capable of being optioned up to the prices seen in on the window stickers of Porsche Cayennes or M-badged BMW X6s. At the same time, with the Range Rover Sport, Land Rover has kept a utilitarian shape to stand in contrast to the others but fashioned a chassis made for backroads as well as no roads.
Thus five vehicles we’d all like to think are cross-shopped may not be at all but form a lovely pie chart representing Canadian sales in February. Check it out, despite the fact that the Land Rover Range Rover Sport may be more of a competitor for the BMW X5; the BMW X6 a unique challenge to the Mercedes-Benz CLS-Class; the Infiniti FX a rival of the Acura MDX; while the Porsche Cayenne and Acura ZDX likely battle the Porsche Panamera and Acura TL, respectively. Maybe. 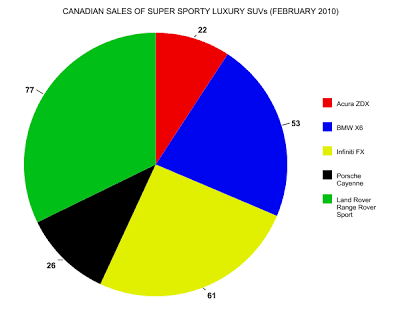